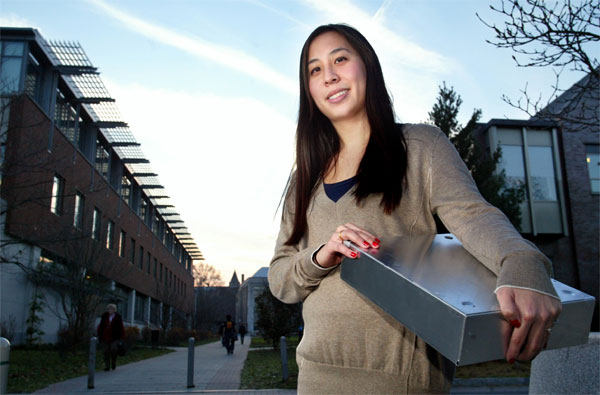 Maddie Lu returned to Princeton University as a graduate engineering student this fall to finish what she started as an undergraduate: building a communications device to help safeguard U.S. soldiers in the battlefield.

Her goal is for the device to prevent wireless communications systems used by the military, police and other first-responders from interfering with one another when they are most needed.

“I learned about this project as an undergraduate, and after we got the principles of the device worked out, I thought it was fascinating,” said Lu, who graduated in 2009 with a degree in electrical engineering.

The federal government announced last summer that Princeton will have special status as a hub for cybersecurity research, opening the door to more research such as Lu’s, which uses engineering expertise to solve national security problems. Universities with this status are designated a National Center of Academic Excellence in Information Assurance Research. The program is administered by the National Security Agency (NSA) and the Department of Homeland Security (DHS).

The Princeton program will be administered by the University’s Center for Networks Science and Applications.

“The National Security Agency and the Department of Homeland Security are looking for smart American citizens to help address the technical challenges of national security,” said Paul Prucnal, a professor of electrical engineering who spearheaded Princeton’s involvement in the program. “This gives faculty and students here an opportunity to pursue funding from NSA and DHS and will open doors for students who want to pursue careers in national security.”

In addition to research funding and fellowships, the designation allows Princeton students to apply for the Department of Defense Information Assurance Scholarship Program and the Federal Cyber Service Scholarship for Service Program.

The programs provide scholarships to rising juniors and seniors and graduate students. Those selected for the program receive funding for tuition, books and other education costs and a stipend to cover room and board.

In exchange for financial support, participants in the programs agree to work as paid interns at national security agencies during summers, while they are in school. After graduation they serve as civilian employees in federal agencies — with one year of service for each year they received academic support.

Prucnal said that his efforts to get Princeton recognized as a Center of Academic Excellence by the national security agencies grew out of his own research on using fiber optics as a secure means to communicate information.

He noted that other Princeton faculty, including Ruby Lee, a professor of electrical engineering, and Jennifer Rexford, a professor of computer science, also conduct research related to information security.

Prucnal said Lu’s work on the device to prevent wireless signals from interfering with each other is a good example of information assurance research that has national security applications. Lu began work on the device at the Fort Monmouth Army base in Oceanport, N.J., as an undergraduate, and now plans to use the project as the focus of her doctoral research in Princeton’s electrical engineering department.

The goal is for the device, which evolved from Prucnal’s research on fiber optic networks, to enable wireless communications systems to both transmit and receive signals in the same frequency band without interfering with each other. This would effectively double the available communication capacity.

Lu currently participates in a separate NSA program that pays her tuition in exchange for spending two summers as an intern at the security agency.

“It frees me from having to work as a teaching or research assistant, so I can focus on building this device,” she said. “I have to spend summers working for NSA, but that seems pretty interesting.”