The degree of gender imbalance in an academic department can be predicted by assessing the emphasis on “natural talent” or “brilliance” in that field, said Princeton University Professor Sarah-Jane Leslie Feb. 3 in a lecture in Maeder Hall at the Andlinger Center for Energy and the Environment.

In perceptions held from an early age, men and women generally perceive women to possess less natural talent than men, with their successes attributed to hard work rather than raw ability. These stereotypes, argued Leslie, the Class of 1943 Professor of Philosophy and the founding director of the Program in Cognitive Science, serve as reliable predictors of the size of the gender gap in certain departments.

In a talk sponsored by the School of Engineering and Applied Science, Leslie said that her own department, philosophy, is a prime example. “In the 1980s, philosophers had this idea of ‘the beam,'” explained Leslie, holding her cupped hand up to her forehead to demonstrate the image of a headlamp. “The belief went that those of us who were lucky enough to be born with this beam could shine the beam on any subject matter they chose without prior study and could illuminate that subject matter sheerly with the strength of that intellectual beam.”

Philosophy, in turn, is a field with a large disparity of men outnumbering women. 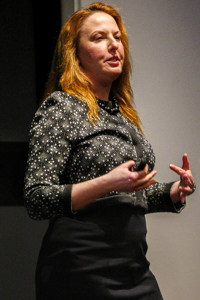 In fact, Leslie said, while gender gaps have traditionally been associated with the STEM (science, technology, engineering and math) fields, the problem is not limited to technical departments. In addition to philosophy, music composition has a gender ratio comparable to those in computer science and engineering. To explain this distribution of gender, Leslie proposed the Field-specific Ability Belief (FAB) hypothesis, which suggests that the gender gap is more prominent in disciplines which are perceived to require innate ability for success.

“There’s a pervasive cultural association that links men, not women, with that kind of raw innate ability. It’s men who are associated with ‘the beam,” said Leslie. “And nowhere is that more evident than in popular culture. It’s difficult to think of even one female Sherlock Holmes, Dr. House, or Will Hunting of Good Will Hunting, a janitor who is able to solve a difficult problem that MIT professors, with all their years of training, are unable to.”

Indeed, previous studies have shown that while women and girls have increasingly been recognized for their academic prowess from as early as elementary school, they are still consistently judged to have lower IQs than their male counterparts. Female professors are far less likely to be described as “genius” or “brilliant’ in reviews on RateMyProfessor.

Alternate hypotheses have tried to explain the gender gap differently. Men might be more likely than women to put in long hours, which favors eventual success. Abstract and systemic disciplines might simply be less interesting to women, or women might be less innately brilliant and are thus be excluded by higher admission standards for these difficult fields. But even when considering these controversial hypotheses in their studies, Leslie and her colleagues found that the FAB Hypothesis was the most reliable predictor of the distribution of women to men who attained Ph.D.s in every field. She and her colleagues obtained the same results when adjusting for factors such as quantitative GRE scores, to see whether these impressions are tracking actual performance.

Leslie suggested that these stereotypes can lead to gender gaps in several ways. Women who have internalized these stereotypes might naturally be discouraged from pursuing fields in which they feel they are less likely to succeed. They might also tend to feel as if they don’t belong, identifying less with fields that value the “flash of brilliance” stereotype. Further, women may be discouraged knowing that others see them as less able or suited for their field, anticipating less favorable job prospects and unfair treatment.

And as Leslie’s research suggests, such concerns may not be entirely unwarranted. These stereotypes take hold early. Further studies conducted by the research group found that conceptions of brilliance as a male trait are socially ingrained by age six and further reinforced by popular culture, where able and intelligent women, such as Hermione Granger, the precocious witch from the Harry Potter series, and Agent Scully, the alien hunter, doctor, and scientist from the X-Files, are grounded in hard work, effort and dedication.

As a triple major in mathematics, philosophy and cognitive science during her college years, Leslie recounted how these stereotypes played into her own choice of philosophy over math for graduate school. Her professors in philosophy were supportive and encouraging, skeptical of ideas such as ‘the beam.’ Meanwhile – despite the fact that she had perfect scores in her math major and won a math award – after being briefly quizzed on unfamiliar material by a math professor in a disconcerting situation early in her sophomore year, she was told that “Sarah-Jane, you’re competent, but you just don’t have it.”

Her own anecdote points to the important role of educators in the gender gap problem, she said. Leslie suggested that these stereotypes can be reduced by emphasizing hard work and collaboration over talent, especially since the latter tends to favor men. “Stop using words like ‘brilliant’ or ‘genius,'” she said, “even if you’re talking about Marie Curie.” Describing women as brilliant might seem helpful, she said, but the effect is “not to tell young women that ‘you can do this too’ but rather to invite them to form the belief that brilliance is required.”

She also encourages educators and students alike to challenge conceptions of talent head-on among their colleagues. “We can start by having open conversations about ways of thinking of abilities,” she concluded. “Because ultimately, everyone-including men-benefits from a more effort-focused outlook.”