From outstanding research to dedicated service to the School of Engineering and Applied Science, members of this year’s graduating class were recognized for their achievements and contributions at the engineering Class Day ceremony Monday, June 4.

Dean of Engineering H. Vincent Poor lauded the 168 seniors for their diverse talents and accomplishments in classrooms and laboratories as well as on stages and playing fields. The students’ post-Princeton plans are equally impressive and wide-ranging, he said, including further study at top engineering graduate programs, careers with companies including Merck, Google and Merrill Lynch, and service abroad through the Princeton in Asia and Princeton in Africa programs. 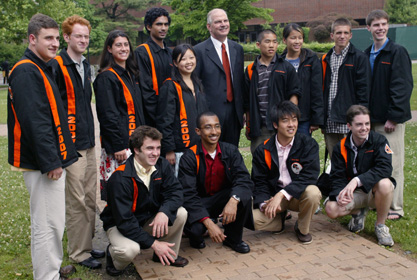 Seventeen students were especially honored at Class Day, which was part of this year’s graduation ceremonies:

John Donnal, who majored in electrical engineering, and Richard Li, a civil and environmental engineering major, were presented with the J. Rich Steers Award, given by the New York City Post of the Society of American Military Engineers to reward scholastic performance that demonstrates potential for further engineering study and practice. In his thesis work, Donnal, who is from Virginia Beach, Va., developed a networked “arbitrary waveform generator” that is now being used in the lab. After graduation, he will take up a commission in the U.S. Army Signal Corps. Li is from Holmdel, N.J., and also received a certificate in Architecture and Engineering. He proposed two new designs for Princeton’s Butler College in his thesis work, one in steel and one in concrete, and will take up a commission in the U.S. Navy next year.
Charles Clarkson, an electrical engineering major from Ontario, N.Y., and Elizabeth Dooley, a Woodrow Wilson School major from Pasadena, Calif., won the Global Photonic Corporation’s Edith and Martin B. Stein Solar Energy Innovation Award. The award recognizes demonstrated excellence in leadership and innovation in research that significantly advances the field of global renewable energy resources. In her thesis work, Dooley examined how California’s Global Warming Solutions Act of 2006 could affect policies in other states, the federal government and beyond. She will teach in Los Angeles next year as part of the Teach for America program. Clarkson, who also received a certificate in Engineering Physics, implemented new algorithms in his thesis work to optimize the power output for solar panel arrays. He will pursue a Ph.D. next year at the University of Rochester.
Jayson Paulose, a physics major, was presented with the Jeffrey O. Kephart ’80 Prize in Engineering Physics. He is from Cochin Kerala, India, and also earned certificates in engineering physics and applications of computing. In his independent work, he pursued two optics projects and a third on condensed matter physics. Next year, he will pursue a Ph.D. in applied physics at Harvard University.
Joseph Ulerich, a mechanical and aerospace engineering major, and Jayson Paulose received the PRISM-Newport Award of Excellence, which recognizes graduating seniors who have demonstrated high scholastic achievement and also shown high potential for leadership in the field of photonics, electro-optics or optoelectonic materials. Ulerich, a native of Pittsburgh, Pa., also earned certificates in materials science and engineering, and robotics and intelligent systems. His thesis work, set the foundation for a new generation of bioimplants, especially those for joint replacement. Next year, he will pursue a Ph.D. in mechanical engineering at Stanford University.
Sara Piaskowy, a civil and environmental engineering major from Crete, Ill., and Vikram Vijayan, an electrical engineering major from Austin, Texas, were this year’s winners of the Tau Beta Pi Prize, awarded to members of the senior class who have significantly contributed a major part of their time to service to the engineering school.

Piaskowy, who also earned certificates in environmental studies and Spanish language and culture, served as co-president and president of the Society of Women Engineers for several years, working diligently to foster a sense of community for women in engineering and to reach out to young women in high school to encourage them to study engineering in college. Piaskowy also excelled academically, and her thesis research on bayside flooding in Seaside Park, N.J., was recognized with the Grand Prize at the recent Undergraduate Research Symposium. Next year, she will work with Princeton’s Water in Africa initiative to develop drainage systems.

Vijayan, who also earned certificates in applications of computing and in engineering biology, was president of Tau Beta Pi, the engineering honor society, and organized his fellow officers and members to lead a range of service activities for Princeton Engineering. In his junior year, he served as a lab assistant in the demanding “car lab” course and he also served as an assistant in the “Introduction to Logic Design” course for two years. In the fall, he will pursue a Ph.D. in the Department of Systems Biology at Harvard Medical School with a National Science Foundation graduate fellowship.

Sratha Saengsuwarn, a computer science major from Bangkok, Thailand, won the George J. Mueller Award, which honors the graduating senior who, over his or her undergraduate years at Princeton, has most evidently combined high scholarly achievement in the study of engineering with quality performance in intercollegiate athletics. Saengsuwarn was co-captain of the men’s varsity tennis team, won the Intercollegiate Tennis Association scholar-athlete award multiple times, and was named All-Ivy at the end of the spring season. His independent academic work to visualize complex network monitoring data advanced the understanding of network usage spikes. Next year, he will work for Microsoft.
Adam Epstein, an operations research and financial engineering major from North Woodmere, N.Y., and Michael Hsu, a civil and environmental engineering major from Raleigh, N.C., received the Calvin Dodd MacCracken Senior Thesis/Project Award, which recognizes the senior thesis or project work that is most distinctive for its inventiveness and technical accomplishment.

Epstein, who earned certificates in finance, engineering and management systems, and in applications of computing, completed a thesis titled “Top-Down or Bottom-Up? An Examination of Multi-Name Credit Derivative Pricing Models,” which addressed the urgent problem of modeling the credit derivatives market. Next year, he will work for Morgan Stanley.

Hsu designed two novel tri-leaflet mechanical heart valves and constructed one from aluminum in his thesis work. Next year, he will attend graduate school in Structural Engineering and Geomechanics at Stanford.

Fang, who is from New Providence, N.J., and Lee, a native of Sudbury, Ontario, Canada, coordinated and led two important service programs. The first, called GetSET, is a program in which students from Princeton tutor and mentor underprivileged children in Trenton, offering academic assistance and a creative arts and drama program. Fang and Lee also organized and led Community Action, a weeklong pre-orientation service program for incoming Princeton freshmen in which they trained the group leaders and arranged work with community partners. Next year, Fang will do litigation consulting at Cornerstone Research and Lee, who also earned certificates in engineering biology and materials science, will attend Johns Hopkins Medical School.

Lapetina, who is from Menands, N.Y., took over the leadership of Engineers Without Borders and moved the young organization to the next level, doubling its roster of student participants and energetically raising funds for projects in Ethiopia and Peru. He was the project manager for the Ethiopia project, which involved the construction of a water delivery system for a village of 2,000 inhabitants. Meanwhile in Peru, the EWB-Princeton continued work with the village of Huamanzana, where they built a solar-powered electrical system for community of 25 households previously without power. Next year, Lapetina will work as a geotechnical engineer for Clough Harbour and Associates.

Jeffrey Hill, a mechanical and aerospace engineering major from San Carlos, Calif., and Tianhui Michael Li, a computer science major from Portland, Ore., received the Lore von Jaskowsky Memorial Prize, which is presented to engineering seniors for excellence in research as well as for improving the quality of University life.

Hill, who also earned certificates in engineering and management systems and in robotics and intelligent systems, designed, built and tested a nano-scale device to measure small-scale eddies in turbulent flow, which involved developing a complex fabrication process. His work will be published in the Journal of Fluid Mechanics and next year he will attend graduate school in Aeronautics and Astronautics at Stanford.

Li, who also earned a certificate in applications of computing, has been “all over the University in his search for hard courses in interesting technical areas,” according to professor Brian Kernighan. Many of these forays grew into independent research projects, including one on financial risk management. Next year, Li will attend Cambridge University in England on a Marshall Scholarship. He also won the computer science department’s Accenture Prize, a Hertz Fellowship, a Merage Fellowship, a National Science Foundation graduate fellowship and was named to the USA Today Academic All-America first team.

Lester Mackey II, a computer science major from Wheatley Heights, N.Y., received the James Hayes-Edgar Palmer Prize in Engineering, which recognizes a Princeton Engineering senior who has manifested excellent scholarship, a marked capacity for leadership and promise of creative achievement in engineering.

Mackey compiled an outstanding academic record over the last four years, earning him the Freshman First Honor Prize, the Class of 1883 English Prize, the Shapiro Prize for Academic Excellence, the Barry S. Goldwater Scholarship, and the Accenture Prize in Computer Science. He also was named the 2007 outstanding male undergraduate by the Computing Research Association, the highest honor a North American college student can receive in computer science. Earlier this year, he was awarded the M. Taylor Pyne Prize, the highest general distinction conferred on a Princeton undergraduate, awarded to the senior who has most clearly manifested excellent scholarship, strength of character and effective leadership.

Mackey also was an editor of Prism, a literary journal devoted to “dialogue, diversity and difference,” advised incoming freshmen as a member of the Black Student Union’s Leadership and Mentoring Program, and was a member of both the Chinese and the Taiwanese-American student associations. He also sang with the University Chapel Choir, the Kindred Spirit a cappella group, and Princeton Music Outreach, which performs in local nursing homes.

Next year, Mackey will pursue a Ph.D. at the University of California-Berkeley as the holder of a Chancellor’s Fellowship and an AT&T Labs Fellowship.