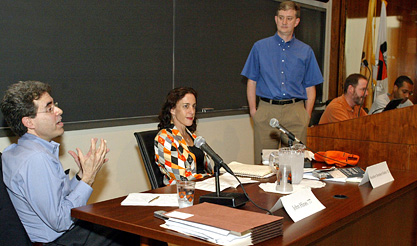 The powerful new software is meant to help people navigate by showing three-dimensional street-level views of a given neighborhood.

“It’s great if you’re trying to navigate to a place you haven’t been before,” said Felten, professor of computer science at Princeton and director of the Center for Information Technology Policy.

Clever though the new service is, Felten said, it poses new challenges to privacy. The special cameras that Google used to create the service captured not just buildings but the people in and around them, including impromptu shots ranging from bikini-clad sunbathers to people picking their noses or taking out their trash.

Felten displayed on an overhead screen an article from that morning’s New York Times featuring a woman in San Francisco complaining that Street View had captured the inside of her apartment, revealing a blurry view of her furniture and her cat.

The woman who complained about this invasion of privacy, Felten pointed out, voluntarily posed for a photo that the Times posted online. Taken inside the woman’s apartment, the photo is a very clear shot of the cat, the furniture and the woman herself. Felten noted the irony: “Even when you can protect privacy, sometimes people choose to put themselves out there.”

Our current quandary over how to preserve privacy arises from powerful advances in information technology, Felten said. These advances have made capturing, storing and replicating information — whether a photo or a social security number –– incredibly inexpensive. 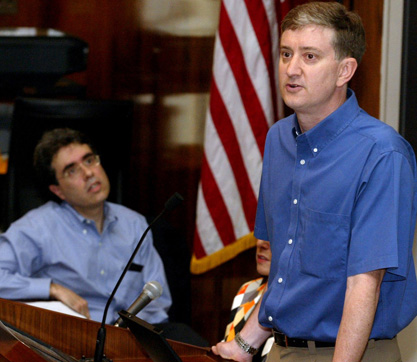 After putting the privacy issue in context, Felten turned to panel members, who were charged with discussing “Preserving Privacy: the I.T. Dilemma.” The panel discussion, which took place June 1 in Robertson Hall, was one of many events during Princeton University’s annual reunions weekend, which drew more than 20,000 alumni and their families.

Matt Blumberg ’92, chairman and CEO of Return Path Inc., said that society has experienced a dramatic shift in its privacy expectations. “There has been a transformation in the past 15 years in how willing we are to give up our privacy voluntarily,” he said.

Heather Dember Rafter ’82, general counsel of DigiDesign said that it is “really hard to have secrets in this electronic age of ours.”

While privacy has decreased in certain ways, countered John Hines ’77, a law partner at Reed Smith, it has increased in others.

“We are searchable all the time, but the technology of the Internet allows privacy in ways we didn’t have before,” he said. Disgruntled employees, he noted, can grouse anonymously online – and with impunity even if their complaints are not valid — about their employers. “The right of anonymity can be expensive for companies,” said Hines.

Osbourne Shaw ’97, vice president of the Internet Crimes Group noted that “people tend to act boldly when they think they are anonymous.” He said that anonymous threats made online were particularly difficult to parse.

“It’s hard to know who exactly is making the threat or to know whether the threat is big or little,” Shaw said. To illustrate his point, he recalled a popular New Yorker cartoon by Peter Steiner of two dogs sitting in front of a computer. One dog says to the other: “On the Internet, nobody knows you’re a dog.”

The panelists seemed in agreement on one key point: the law is perpetually playing catch-up to technology.

Rafter noted the difficulty in following laws that protect privacy, given that they range widely across state, national and international jurisdictions.

In the end, said Rafter, the best policy for a company to follow is to comply with the strictest laws worldwide, and to be upfront, honest, and to act in good faith. “Privacy is really about trying to do the right thing –– trying to treat people with dignity,” she said.