Bacteria have to work to earn their keep in the lab of David Wood, assistant professor of chemical engineering. 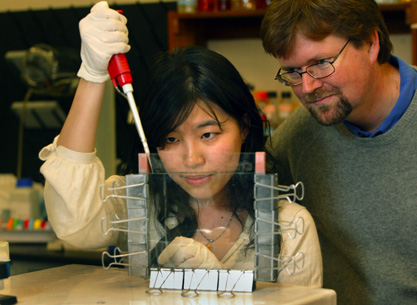 Wood created the bacteria by linking human hormone receptors to the proteins that are required for bacterial cell growth. The engineered cells will grow in the presence of compounds that stimulate the receptors, but not when exposed to substances that block them. This latter capability could help identify drugs to treat Graves’ disease, in which too much thyroid hormone is produced.

“Right now, the most common treatment for Graves’ disease is to destroy the thyroid,” requiring the patient to take artificial hormones forever, Wood said. “We’re hoping to find a way to slow the patient’s thyroid response down.”

The bacteria also can be used to screen for environmental pollutants, such as plastic residues, that induce estrogenic responses and may disrupt normal endocrine functioning. Wood recently identified two new estrogenic compounds with Georgios Skretas, who earned his B.S.E. and Ph.D. in chemical engineering at Princeton (in 2001 and 2006) and is now at the University of Texas at Austin.

Wood relied upon inteins-substances that induce protein splicing-to successfully engineer the bacteria. Inteins also figure prominently in a simple and economical protein purification process he is developing for large-scale use by pharmaceutical companies. He presented the technique at the April 2007 meeting of the American Institute of Chemical Engineers as part of a program on technologies that are likely to radically change pharmaceutical development.