Engineering students won several of the nation’s and Princeton’s top academic honors this year, including Marshall and Goldwater scholarships and the highest student prize in the field of computer science.

Lester Mackey, a senior majoring in computer science and pursuing a certificate in applied and computational mathematics, earned three major honors this year. He is one of two seniors awarded the University’s highest general distinction conferred on an undergraduate, the Moses Taylor Pyne Honor Prize, which is awarded to the senior who has most clearly manifested excellent scholarship, strength of character and effective leadership. 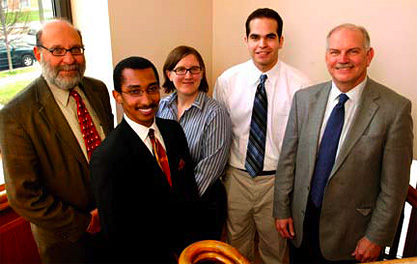 Mackey, who is from Wheatley Heights, N.Y., also was named the 2007 outstanding male undergraduate by the Computing Research Association, the highest honor that a North American college student can receive in the field of computer science. He is the first Princetonian to win this award, which was bestowed in recognition of his groundbreaking work with Assistant Professor of Computer Science David Walker on hardware faults. David Weiss, also a senior majoring in computer science, won an honorable mention in the same Computing Research Association competition.

“At every step, but particularly in his research activities, Lester has far exceeded what I imagined it possible for any undergraduate to do-and I have worked with other very, very talented undergraduates at Princeton,” Walker said. “When that fact is combined with his generosity and leadership in fostering diversity, I think Lester is deserving of the highest possible praise and awards.” 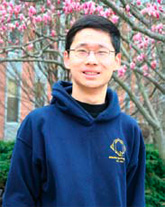 Mackey also was the co-winner of the Accenture Award with Tianhui “Michael” Li. The award is given each year to a senior majoring in computer science based on academic excellence during his or her first three years at Princeton. The award includes a cash prize funded by a gift from Accenture, the management consulting and technology services company.

Li, who also is a certificate candidate in mathematics, was one of 43 students from U.S. colleges and universities to win a prestigious Marshall Scholarship, which covers the cost of living and studying at a British university of the recipient’s choice for two or three years. He will enroll in a one-year master’s program in mathematics at Cambridge, and then plans to pursue doctoral research in mathematics, focusing on information theory.

“Michael is an amazingly creative, intelligent, and hard-working individual,” said Kevin Wayne, senior lecturer in computer science, who worked with Li to analyze PageRank and other web search ranking algorithms. “Because of his thirst for new knowledge in a wide range of disciplines, Michael’s work has a distinctively interdisciplinary flavor, weaving ideas from computer science, physics, mathematics and economics. His wonderful creativity enables him to formulate original research questions, view problems from entirely new perspectives and solve them with elegant and novel techniques.”

The Fannie and John Hertz Foundation and USA TODAY newspaper also recognized Li’s academic excellence. He is one of the recipients of a 2007 Hertz Foundation Fellowship, a prestigious award given annually to 15 students in the nation to support five years of graduate study in the applied physical, biological and engineering sciences. USA TODAY named him to the 2007 All-USA College Academic Team. 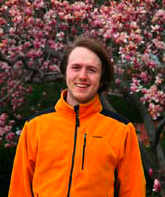 Andrew Saxe, a junior majoring in electrical engineering, has been awarded a Barry M. Goldwater Scholarship, a distinguished national honor that supports undergraduate study in the fields of mathematics, engineering and the natural sciences as preparation for careers in these areas. A member of the Princeton Autonomous Vehicle Engineering team, Saxe was described by the team’s advisor, Alain Kornhauser *71, professor of operations research and financial engineering, as “quite creative … a leader and a take-charge type of guy‚Ä¶”