On a brisk afternoon in March, senior Rochelle Murray delicately holds a test tube in each hand, looking to see how her latest experiment is turning out. This experiment is part of the chemical engineering major’s senior thesis, which involves research in a hot area: the transmuting of waste material into clean-burning fuel. 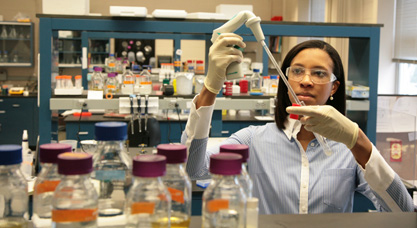 Sugar-dense foods like corn can be easily turned into ethanol, an alternative fuel that is environmentally friendly. The problem is that, in the developed world, making ethanol from food crops makes it more expensive than fossil fuels. And in the developing world, food is scarce and needs to be used to feed people.

Cellulose waste — anything from corn stalks and yard trimmings to orange peels and Christmas trees — is cheap, abundant and infinitely renewable. As such it is a very appealing potential source of ethanol. But so far it has proven difficult to break down the tough fibers of cellulose into a soluble form of sugar so that it can be turned into ethanol.

Enter Murray’s research in the laboratory of James Link, who became an assistant professor of chemical engineering at Princeton in the fall. Link specializes in protein engineering, not only in the area of biofuel but also for use in molecular therapies for cancer and for a new generation of antibiotics for fighting drug-resistant bacteria.

The test tubes that Murray is holding contain a special enzyme that acts as a catalyst, spurring the cells suspended in liquid to work like efficient miniature factories, breaking down cellulose into sugar. “The long-term goal is to create an enzyme that is significantly more powerful than anything existing,” said Link. But even if his lab never reaches that goal, he said, “a lot of interesting science will unfold along the way.”

Murray decided to focus her research in this area because “the applications have really motivated me,” she said. While the world needs new energy sources, she appreciates that the research in Link’s lab may also lead to new innovations in waste management or spawn an industry that would create much-needed jobs in the developing world.

“Rochelle has a lot of insight,” Link said. “She has read a lot of background so she has an in-depth understanding of what the issues are.”

In conducting her laboratory research, Murray has collaborated closely with chemical engineering graduate student Diya Abdeljabbar, who said he admired Murray’s perseverance. “If something doesn’t work she goes back and does research on her own to figure out what happened. She doesn’t sit around waiting for someone to tell her what to do next,” he said.

Murray said she has enjoyed the challenge of independent research. “You look at the results and you can end up with something completely different from what you expect. Is it because something went wrong or because you have discovered something new? It is an adventure in problem solving.”

Abdeljabbar, who did independent research in both his junior and senior years at the New Jersey Institute of Technology, considers it an invaluable experience. So does Link, who as a Princeton undergraduate did junior and senior independent work under Maitland Jones Jr., now the David Jones Professor of Chemistry Emeritus, studying a light-activated molecule that could break apart DNA.

Independent research, said Link, “was one of the things that encouraged me to go on to graduate school and ultimately to become a professor.”

For her part, Murray, who is from Mount Airy, Md., is still not certain what the long-term future holds. After graduation she will work for General Mills Inc. as an operations management associate, an 18-month position. Murray does not know whether after that she will continue to pursue a career in industry or go to graduate school. “Doing this work has pulled me in both directions,” she said.