During the event, professors welcomed the 268 members of the class of 2012 – a group comprised of 40 percent women – to the School of Engineering and Applied Science. Wizened upperclassmen were also on hand to share tips on surviving the first year of university, registering for classes and choosing an area of engineering specialization. 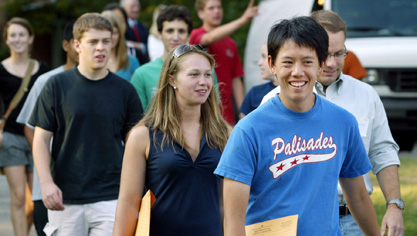 “Princeton is a great place to get an engineering degree and a liberal arts education,” Dean H. Vincent Poor told the students at an afternoon assembly held in Friend Center auditorium. “For the engineering problems you’ll face during your career you’ll need grounding in humanities. Health care, economics, the environment – these are all things that have a social component.”

In the spring, the students will choose an area of focus in their studies; to help them make their choices and to understand the different engineering disciplines, faculty from the school’s departments offered the students an overview of the academic and research strengths of their departments.

Larry Peterson, chair of the Department of Electrical Engineering, said people often underestimate the scope of his specialty. “A lot of people think computer science is all about programming,” he said.

He explained that computer scientists tackle a wide range of problems from large systems, such as the Internet, to genomics research that explores the links between DNA and disease. “Computer scientists work hand in hand with life scientists to solve these problems,” he said. 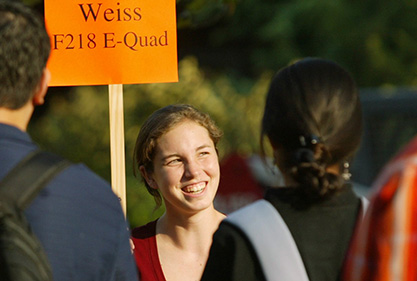 Yueh-Lin “Lynn” Loo, an associate professor in the Department of Chemical Engineering, said graduates from her department have traditionally gone on to work for oil companies such as Exxon Mobile and British Petroleum and chemical manufacturers such as Dow, but the field has broadened considerably to include drug discovery, nanotechnology and alternative energy.

“Chemical engineering takes what chemists and biochemists develop and then scale it up to make lots of useful products,” she said.

In pitching their specialty to the students, the faculty engaged at times in collegial inter-departmental ribbing. 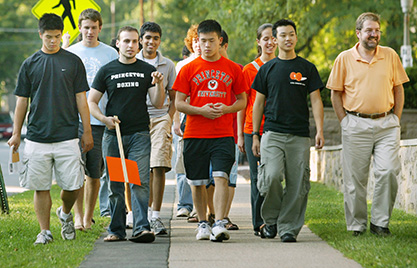 Many of the students sat on the edge of their seats during the assembly, knees needling up and down, their dog-eared freshman orientation guides evidencing their busy beginning-of-year schedules.

“There’s orientation during the day and parties at night,” said Linda Zhang, from Calgary, Canada. “So if you do both, you’ll be pretty tired.”

After the assembly the students met their faculty advisors to discuss class registration and the upcoming year. They also met with “interactors,” older students who volunteered to serve as mentors. 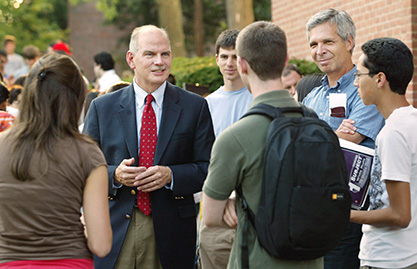 “I hope you all remember who your advisor is,” Peter Bogucki, the associate dean for undergraduate affairs, told the students as they prepared to file out of the auditorium. He surveyed the assembly, but got no response. “Ah,” he said, “nervous laughter.”

At an outdoor barbeque held next to the engineering school after the group advising sessions, one freshman told her interactor it was going to be difficult to choose a specialty. “I’m so interested in so many things,” she said. “I’m really not sure what I want to do.”

Her mentor replied that she’d chosen to pursue a pre-medical track during her freshman year and that it had proven difficult but satisfying.

Another freshman, Poshak Agrawal, from New Deli, India, talked with Martin Valdez, from Texas, a senior in operations research and financial engineering, one of the school’s most popular majors.

Agrawal arrived in Princeton in late August and said he’s beginning to acclimate to a new country and the university. “There’s a lot to do and a lot to explore,” he said. “Different food, different climate, different culture. It’s a little stressful, but it’s exciting.”