A method invented at Princeton for dramatically improving web access in developing nations has been named one of “10 emerging technologies” for 2009 by Technology Review magazine.

The magazine, which annually assesses leading researchers and their work, reported that the innovation by computer scientists Vivek Pai, Anirudh Badam and colleagues is among “10 emerging technologies that will change the way we live and do business.” 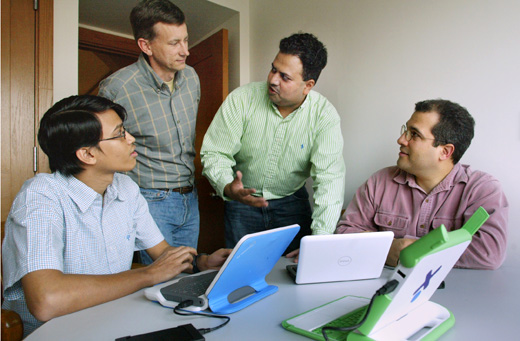 The researchers created what they call HashCache, a method for greatly speeding access to web pages while reducing the need for computer memory and electricity by 90 percent. The HashCache system, like a standard web browser, stores (or caches) information from websites that have already been visited to speed up access the next time. The innovation, however, is to store the information much more efficiently so that even an out-dated PC could retrieve the equivalent of the entire contents of Wikipedia quickly and with little computing power.

“Instead of pulling down information from the Web once per person, you pull it down once per school or once per business,” Pai said. Very large computer storage disks have become very cheap, but the standard technology for sorting through all that information requires significant computing power. With HashCache, “you can drive this system off really cheap machines, any desktop you have lying around or these $200 laptops for kids.”

Pai’s research group includes Badam, a graduate student, who led the development effort, and KyoungSoo Park, who is now a professor at the University of Pittsburgh, as well as research scientitst Marc Fiuczynski and Larry Peterson, chair of Princeton’s computer science department.

Peterson said the innovation could help bring Internet access to another billion people beyond the 1.6 billion who currently have access. “Vivek’s focus on bringing the Internet to the next billion is an important one,” Peterson said. “The industrialized world is well-connected. The last billion have more urgent needs, such as clean water. But the next billion have poor connectivity and little infrastructure and could really benefit from the improved education, health and commerce that Internet access would provide.”

Pai is exploring various options for deploying the technology. One approach would be to offer free licenses to anyone in the third world who wanted to set up a faster network. Another would be to develop an inexpensive commercial product that combines the necessary hardware and software into a simple plug-in device that would require no expertise for a user.

In the meantime, he is continuing to push his research efforts, which have mostly focused on ultra-fast and high-performance networking, toward creating solutions for people with less access to equipment and power. In the fall, he will co-chair a workshop titled “Networks and Systems for Developing Regions.”

“The goal is to help out people in the developing world in whatever way makes the most sense,” Pai said.