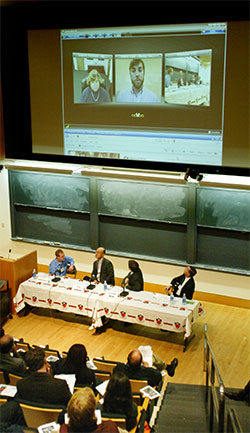 Connor Mulcahey struck gold last spring when he installed a program on his iPhone. His was the billionth iPhone application download from the iTunes store and to celebrate the milestone, Apple lavished the 13-year-old from Connecticut with prizes that included a laptop and a $10,000 iTunes gift card.

Yet David Lieb may have gotten even luckier that day.

Lieb, who graduated from Princeton with a degree in electrical engineering in 2003, is CEO of Bump Technologies, the company that developed the application Mulcahey downloaded. Happening to be the billionth download brought much welcome publicity for the application and now Lieb is hoping that fortune will follow fame.

Lieb was one of five developers of iPhone applications who shared their stories at a panel discussion sponsored by Princeton’s Keller Center for Innovation in Engineering Education, titled “iPhone Apps: the New high-tech Gold Rush.” The event was also sponsored by the Jumpstart New Jersey Angel Network and the law firm Drinker Biddle and Reath.

The entrepreneurs elaborated on the promise and pitfalls of exploring this fast-moving sector of software development and took questions from members of the audience, which included students, members of the local community and angel investors on the prowl for promising new ventures.

“Tonight we’re going to learn from people who are blazing a trail in developing applications,” moderator Ed Zschau ’61, an electrical engineering professor and visiting lecturer in entrepreneurship, told the attendees.

The emergence of smart phones, such as Blackberries, iPhones and Google’s Android phones, with their potential to connect consumers to products through a handheld device, presents tech-savvy entrepreneurs with the prospect of big-rewards and big risks.

Apple has sold over 30 million iPhones since they were introduced in the United States in 2007 and over 100,000 applications are now available for download on iTunes. “The problem is not developing an application, it’s marketing in the sheer amount of chaos and noise in this marketplace,” said panelist Ken Kay, the founder and CEO of ici, an iPhone app that helps arts organizations and artists connect with the public.

Another panelist, Matt Connor ’11, an operations research and financial engineering major at Princeton, has also struggled to get word out about an application he developed with his brother, called Islet, which helps type 1 diabetics manage their disease. “There aren’t very many type 1 diabetics and they are difficult to find,” he said. One strategy they employ is to inform doctors about the application so they can pass the information on to their patients. They have also included the word “diabetic’ in the title of the application online so it is easier to find with a keyword search.

Although Connor didn’t originally create the application as a business enterprise, he and his brother are now building a Web-based extension for the app that could provide users with further subscription-based services such as powerful analysis of their eating, blood sugar and insulin patterns.

Harry Schmidt, a Princeton doctoral candidate in classics who developed Greek and Latin dictionaries for the phones, said his application has almost no chance of becoming a business. “It was built for academics, and, as you all know, we academics don’t have any money,” he joked. In addition to studying ancient Greek tragedy, Schmidt works in the field of computational philology, a new discipline that uses computers to solve ancient literary problems. His dictionary apps, Lexidium and Lexiphanes, were designed to help researchers tackle the classics in their original language.

Leib’s application, on the other hand, had decidedly commercial origins. The idea came to him while he was studying for an MBA at the University of Chicago. He was meeting lots of new people, many of whom also owned iPhones, but they had to manually type in each others’ contact information. “I got frustrated,” Lieb said. “I saw all these people with these really smart phones, but with no easy way to share information. It seemed ridiculous.”

The application he developed, dubbed Bump, capitalizes on the phone’s accelerometer to sense when two phones are bumped together. A remote computer then calculates what two phones at a single location in the world have just knocked together and prompts the users to choose which information they’d like to exchange. No laborious typing of names and numbers.

Since it launched, the application has been downloaded 6 million times by iPhone users and Lieb is planning to release the same technology for the Google Android platform. Bump Technologies recently raised $3 million in venture capital. Lieb said they are currently focusing their efforts on becoming a core technology that serves as the basis for many other uses of smart phones.

“We have plans for monetizing the application,” Lieb said, “but all of these ideas are predicated on the idea that we become a ubiquitous standard.”