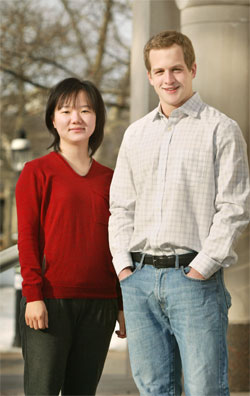 Shin was recognized for her work developing a computer program to help archeologists in Greece reconstruct ancient frescos on the Aegean island of Santorini, the site of a catastrophic volcanic eruption around 1650 B.C.

The eruption eradicated the island’s civilization and the ruins were buried under the detritus of nature and subsequent societies over the centuries.

Shin worked with computer science professors Thomas Funkhouser and Szymon Rusinkiewicz to develop a program to use information from frescoes that archeologists have already pieced together to help guide the reconstruction other frescoes. The loose fragments are scanned with imaging software, then analyzed by Shin’s program, which suggests which characteristics, such as shape, size and color pattern, are important for matching the shards.

“It’s like a big jigsaw puzzle,” Shin said. “We’ve recently produced 40 or 50 matches, which is really exciting when you’re thinking about artifacts that are more than 3,500 year old.”

While Shin’s work paid homage to the past, Wendell’s focused on the future. He worked with computer science professors Jennifer Rexford and Michael Freedman to develop a system for routing online traffic more efficiently over the Internet.

“Websites that serve huge numbers of users from all over the globe, like Google or Facebook, want to give their users data as quickly as possible,” Wendell said. “One good way to do that is delivering that data from a server that is close to the user. If they are in San Francisco, you want to deliver the data from a San Francisco server.”

The problem is that a local server could get overwhelmed by some spike in Internet traffic and need to draw files from some other location. To help groups of servers collectively decide where files should be delivered from, Wendell develop a system called DONAR that computes the most efficient means of delivery.

“It’s a balancing act,” Wendell said. “You want to deliver data from the closest server, but you don’t want to overwhelm that server. You want to find the optimal decision.”

Wendell presented his research at a computer science conference this past summer and the system is now being used by CoralCDN, a large content distribution network and MeasurementLab, a distributed research platform.

Winners of the Outstanding Undergraduate Researcher Awards, typically one male and one female student, receive a $1,000 and financial assistance attending a computing research conference.

Since the awards were first bestowed in 2001, two Princeton computer science students have won: Rachel Sealfon in 2008 and Lester Mackey in 2007. Both were seniors at the time they received the award.