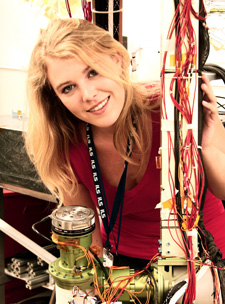 Co-designed a “scanning laser infrared molecular spectrometer” to detect gas
molecules in the open air. Determined the optimal geometry and materials for the device, which has the
potential to be used by NASA’s Jet Propulsion Laboratory on planetary missions or for emissions
detection in urban areas.

With classmate Shelley Chan, presented a proposal for a docking station to facilitate manned
missions to Mars at the Revolutionary Aerospace Systems Concepts Academic Linkage Forum. Received the J.
Rich Steers Award from the School of Engineering.