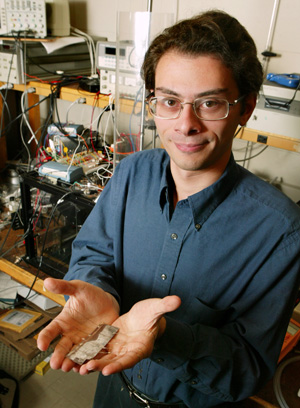 style=”width: 300px; height: 408px;” title=”Noah Jafferis (Photo by Frank Wojciechowski)”
/>Noah Jafferis did not expect, when he started graduate school at Princeton, to invent something that
has been touted in media coverage from around the world as a “magic carpet.”

After what turned into years of dogged work, the result was a 4-inch-wide sheet of conductive
plastic driven by “ripple power,” waves of electrical current that push thin pockets of
air underneath the plastic sheet, from the front to the rear, allowing it to propel itself forward slightly
above a surface.

Sturm told the BBC in a Sept. 30 report that the project seemed “far out” at
times, but that the underlying principles and approach were always fundamentally solid and realistic.

“What was difficult was controlling the precise behavior of the sheet as it deformed at
high frequencies,” Sturm told the organization. “Without the ability to predict the exact
way it would flex, we couldn’t feed in the right electrical currents to get the propulsion to work
properly.”

Now that the basic principle has been proven, he is working to improve the performance of the
device. Jafferis said he sees potential to install onboard power and an array of sensors and use the device
to detect chemicals or other data in remote locations.