In her years in business, Princeton alumna Joy Marcus has moved from success to
success. She headed divisions at major corporations, helped take a company public, and guided an Internet
startup from launch to acquisition. Recently, she joined the venture capital firm DJF Gotham as a venture
partner.

In her career, Marcus said, she has felt “completely unlimited.” So it was bit
jarring when she attended her first firm meeting this year in Half Moon Bay, Calif., and saw she was one of
fewer than 10 women among approximately 150 attendees.

“It was shocking to actually sit in a large room with all of my colleagues, almost all of
whom were men,” she said. In fact, Marcus said, DJF Gotham is very welcoming to women. Yet she
finds the relatively small number of women involved in the startup industry troubling.

“I think for the most part, male investors tend to be even-handed and fair,” she
said. But it can be difficult for female entrepreneurs to build their companies and almost never meet
another woman in the process. “That is the typical experience of the female entrepreneur.”

Marcus, a 1983 Princeton graduate, told her story as part of a panel of Princeton alumni and other
entrepreneurs and business leaders hosted by the University’s http://commons.princeton.edu/kellercenter/index.html”
target=”_self”>Keller Center Dec. 7 at Bowen Hall. The panel, titled “Women
in Entrepreneurship,” focused on opportunities and challenges posed by the underrepresentation of
women in startup companies and venture capital. The panel also included Alexandra Landon, a senior who is
co-president of the http://www.princetoneclub.com/” target=”_self”>Princeton
Entrepreneurship Club. 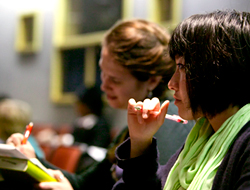 style=”height: 190px; width: 250px;” title=”The audience included undergraduate and graduate
students from across the University (Photos by Brian Wilson)” />Venture capitalist and Princeton
alumna Kef Kasdin opened the discussion by referring to a recent study showing that despite female
leadership in traditional business, women are involved in startups at roughly half the rate of men. The
study, by the Kauffman Foundation, also found that women make up only about 11 percent of venture
capitalists, and that female faculty members sit on science advisory boards of high-tech companies at a far
lower rate than their male counterparts.

“When I graduated from Princeton in 1985, I never imagined we would be having this
conversation in 2011,” said Kasdin, a founding general partner at Battelle Ventures and CEO of
Proterro Inc.

While all the panelists agreed that the numbers were deeply troubling, they had no consensus on why
women are underrepresented in business startups. For the most part, the panelists said they had not been
limited in their own careers. Entrepreneur Natasha Gajewski said she has walked the hard road that any
entrepreneur faces in establishing her Symple Symptom Tracker, an app that allows patients to better manage
their medical care. But Gajewski, who started her effort seven months ago, said the difficulties were common
to all entrepreneurs.

“I just never imagined limitations based on my sex,” she said. “It just
never occurred to me.”

Marcus said that, as a female partner at DJF Gotham, she had found that frequently her perspective
as a woman offered an advantage. Still, she said, most of the business proposals she reviews from women
entrepreneurs tend to be in fields traditionally driven by women, such as fashion.

Marcus found this puzzling because women play a key role in many industries such as advertising and
the media. In a recent article in TechCrunch, venture capitalist Aileen Lee pointed out that female users
and consumers are driving the development of the Internet — with women accounting for most of the
activity on sites including Facebook (62 percent of activity) and Groupon (77 percent of customers.)

“They know the industry better than anyone,” Marcus said. “So why aren’t
they doing that?” 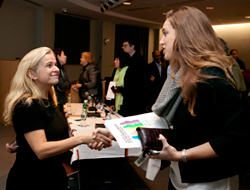 style=”width: 250px; height: 190px;” title=”Alumna Joy Marcus (left) talks with a student
following the panel discussion.” />Landon, the Princeton senior, offered a different generational
perspective on the issue. She said that she felt there were far fewer societal barriers facing women in
business, but she felt that sometimes women needed to overcome personal doubt.

“A lot of what people used to talk about is giving women opportunities,” she
said. “Now, we are talking about structural mechanisms to ensure women take advantage of those
opportunities … or overcome self doubt.”

Landon mentioned one classmate who had been reluctant to fill out a competitive application for
last fall’s http://tigertreks.tumblr.com/” target=”_self”>TigerTrek,
a trip that offered students an opportunity to meet with business leaders in Silicon Valley.

“She said, ‘I just did not think it was something that someone like me would get,'”
Landon recalled. But by the end of the trip, “she was clearly one of the best participants.”

Landon noted that Princeton President Shirley M. Tilghman has made a particular effort to encourage
women to take advantage of those opportunities. Tilghman formed the http://www.princeton.edu/main/news/archive/S30/05/88Q71/index.xml”
target=”_self”>Steering Committee on Women’s Undergraduate Leadership, which
last spring released a set of recommendations aimed at encouraging greater leadership roles for University
women. http://www.princeton.edu/president/speeches/20111113/” target=”_self”>In
a recent speech, Tilghman pointed out that between 2005 and 2010, all 11 Princeton students named
Rhodes Scholars were men. This year, three of Princeton’s http://www.princeton.edu/main/news/archive/S32/18/32A63/index.xml?sectio…
target=”_self”>Rhodes Scholarship winners were women, due to efforts to encourage
more female applicants.

“I have never felt my gender was an issue,” Landon said. She said earlier
generations had made tremendous progress in taking down gender barriers, and that new approaches were needed
to build on their success.

As a charge to those who will encourage the next generation of leaders, she said, “What
are the barriers that are less apparent?”