Computer science is among the most forward-looking of disciplines, and in an address at Princeton University on Thursday evening, May 10, Eric Schmidt paid tribute to Alan Turing, one of the giants of the field, by looking ahead to an almost unimaginable future.

“There is a quote from Turing that I like, ‘Machines take me by surprise with great frequency,'” said Schmidt, the former CEO and current executive chairman of Google and a Princeton Engineering alumnus. “That’s my life every day. And I think it is true of most people in the world today.”

Speaking to a packed audience in McCosh Hall, Schmidt returned to campus this week to participate in the Turing Centennial Celebration, a three-day conference honoring the work of one of the founders of computer science, who received his doctorate from Princeton in 1938.

Schmidt, a leading proponent of an increasingly connected world, sketched a future in which virtual reality, self-driving cars and artificial intelligence will help guide economics, medicine and teaching. It is all part “the big data revolution,” he said, a transformation of society driven by an exponential increase in computing power and the expanding ability to process information about the world. In the near future, he asserted, computers will allow us to predict traffic jams before they happen, alert governments to impending economic collapse and allow doctors to respond to disease outbreaks before they actually occur. 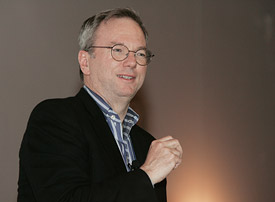 “At the core level, technology in this model disappears,” he said. “The Web will be everything, and it will also be nothing. It literally becomes a part of the fabric of our lives. When? In the next five to 10 years.”

One of the leading figures in the business world, Schmidt graduated from Princeton in 1976, and he went on to lead several corporations fundamental to building today’s wired society. He was CEO of Novell and chief technology officer at Sun Microsystems before joining the small group that transformed Google from a tiny startup into an Internet colossus.

Introducing Schmidt, Robert Sedgewick, the William O. Baker ’39 Professor in Computer Science, pointed out that Schmidt and his colleagues represented a midpoint between Turing and the students of today. 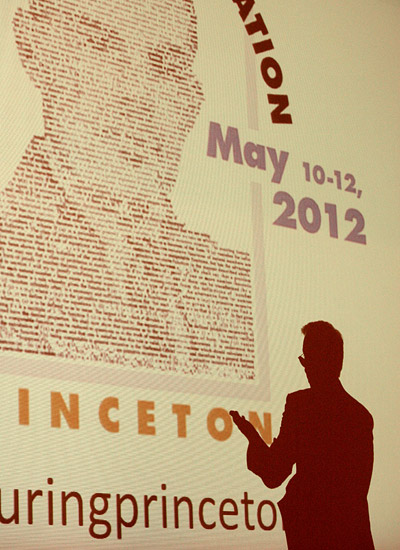 Schmidt was the keynote speaker for the celebration, which brought together computer scientists, engineers, mathematicians and others for a series of presentations and events involving Turing’s legacy, and participants included eight recipients of the Turing Award, often considered the computer science equivalent of the Nobel Prize. Turing, who studied at Princeton in the late 1930s, is considered the key figure in the emergence of computer science as a field distinct from mathematics. The conference highlights Princeton’s continuing contribution to the field of computer science and explores the critical role that the University’s investment in basic research played in the computing revolution.

In a 90-minute presentation by turns impassioned and funny, Schmidt presented his view of the networked world. He paid tribute to faculty members “who were icons to me as a young computer scientist,” and said that students today are entering a world in which “it is just extraordinary to think of what is possible.”

For a few ultra-connected individuals, “the future offers as a limit only what science can deliver and what is legal and permissible,” he said. And for other people, those Schmidt called the “digital middle class,” the networked globe offers an opportunity to participate in the world in an entirely new way.

“I like to think of it evolving into a collective intelligence, a global consciousness,” he said. Entering into the digital cloud, he said, “allows you to be a unique individual while also participating in this collective consciousness.”

But this brave new future only involves a privileged minority. “For the majority of humans on the planet, the digital revolution has not arrived yet,” Schmidt said.

The majority of the world’s population, “the most important group,” is still not able to participate in the networked world, he said, because of war, corrupt governance or lack of infrastructure. For every one person who is online, two are left out.

“The reality is that for the next decade those people are not going to be connected,” Schmidt said. “How do we fix that?”

Schmidt said the answer is technological innovation and “interesting cobbled-together networks” that allow people across the world to participate to some degree in the digital future. Even in the poorest regions, people will be able to get access to relatively simple devices that contain a remarkable amount of information – enough to offer the equivalent of a high school education or help people start their own business, he said.

“Think of what happens when a device like this shows up in a place that has never had a textbook,” Schmidt said. “It is life changing.”

For all the incredible advances that computing has offered so far, Schmidt said the true advances will come when all of the world’s citizens are online.

“What happens when all those people all get connected,” he said. “That is when things really start to roll.”