In the course of studying water and its impact on communities, Peter Jaffe and his students have waded through the marshes of New Jersey’s Meadowlands and worked with villagers in India to remove toxins from their drinking water.

Their travels represent the wide range of interests that Jaffe, a professor of civil and environmental engineering, has pursued in water-related research.

In India, fluoride contamination in well water is common in parts of the country. In small amounts, fluoride helps prevent tooth decay, but too much fluoride can deform teeth and bones. Jaffe’s group found a way to use apatite, a phosphate compound, to filter out the fluoride and leave the well water safe for residents. And, because phosphorous is good for plants, the old filtering material can be re-used as fertilizer. 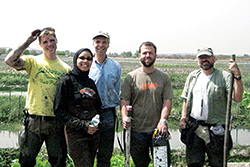 Closer to home, Jaffe and a team of researchers from Rutgers and the Meadowlands Environmental Research Institute have embarked on a project to measure how environmental conditions, including plant growth, affect the amount of greenhouse gas emitted by the wetland. The researchers hope their work will allow for better control of marsh gases such as methane, a powerful greenhouse gas. Plants are thought to help balance these emissions and, among other things, the research will examine the impact of two of the most common plants in the Meadowlands: cordgrass (spartina) and the invasive common reed (phragmites).

The Meadowlands work is similar to other projects that Jaffe has undertaken. In recent years, his research teams have looked at how wetlands recover from long-term pollution, and have examined methods to reduce concentrations of toxic metals in the environment. 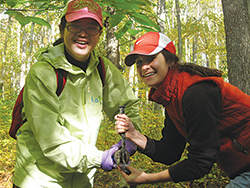 Jaffe and his students also are working on a project, funded by a Princeton Project X grant, that could offer a promising method to counter widespread environmental damage caused by nitrogen compounds in water. These compounds enter waterways in fertilizer from agricultural runoff and have created massive dead zones in fresh water and coastal regions in which plants and fish cannot survive.

Jaffe and his students analyzed wetland sediment samples from the Assunpink Wildlife Management Area in New Jersey and uncovered indications of a novel mechanism by which iron-reducing microorganisms convert ammonium in runoff to harmless nitrogen gas, which returns to the atmosphere. Currently, the team is attempting to understand the process better with the hope of using the organisms or a similar chemical mechanism to clean up threatened waterways.