Pablo Debenedetti studies water at the smallest possible scales – zooming in on molecule-to-molecule interactions – but the implications for large industrial processes and many scientific fields could hardly be greater.

Take water quality. Debenedetti and Sankaran Sundaresan, both Princeton engineers, are attempting to find a clean, new way to desalinate water by using hydrates, or crystalline solids in which hydrocarbon molecules are trapped in water cages. When hydrates form in seawater, these water cages are salt-free, so the researchers are trying to use them to draw pure water from the ocean. The work, supported by a Princeton University Grand Challenge and Project X grants, could lead to a relatively low-cost and low-energy method of providing needed drinking water.

“There is a sense of urgency about water that has accelerated in recent years,” said Sundaresan, a professor of chemical and biological engineering. “It has led us to take a look at new options.” 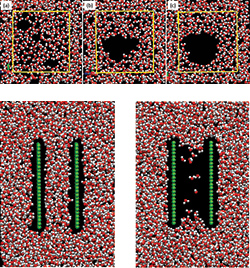 Princeton engineers also are examining how water behaves when squeezed between waterproof surfaces at the molecular level. Understanding the process would provide key insights for the design of self-cleaning materials and the preservation and storage of certain pharmaceutical compounds. The expulsion of water at the molecular level also is thought to play a key role in the folding of proteins – the process by which proteins assume their shape and function in the cells of all living things.

In a recent paper in the Proceedings of the National Academy of Sciences, Debenedetti and postdoctoral researcher Sumit Sharma found that the most important factor in determining the speed at which this squeezing process can occur is the distance between the surfaces. The researchers found that a small cavity spanning the space between the surfaces had to form before the water would evaporate, and the ease with which this cavity could form depended sensitively on the space between the surfaces. Debenedetti said that the difference of as little as a single angstrom (one ten-billionth of a meter) could change the chance of drying one hundredfold.

It is possible that water expulsion could be a controlling factor in how fast certain proteins, called globular proteins, adopt their biologically active shape, but further research will be required to explore that question.

“This type of research is very fundamental,” Debenedetti said. “The general problem is to predict the substance’s observable properties starting from the molecular level.”