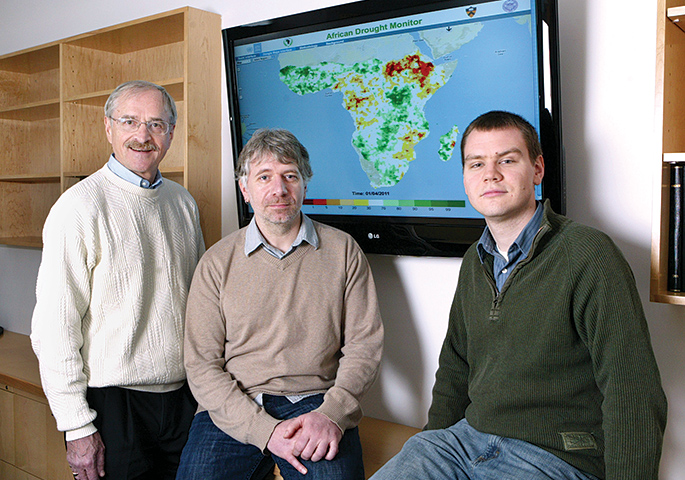 Drought is often the precursor to disaster, but getting leads on its stealthy approach through remote or war-torn areas can be so difficult that relief agencies sometimes have little time to react before a bad situation becomes a calamity.

The problem is that there is often no easy way to get data about water supplies in these areas – water monitoring stations don’t exist, or they don’t work, or their locations are simply too dangerous. Groups such as AGRHYMET, an intergovernmental hydrology, agricultural and food-security agency based in Niger, often have to rely on far-flung observers, often volunteers, to obtain the information manually.

“AGRHYMET conducts the drought monitoring for the whole of West Africa from Cape Verde and Mauritania to Chad and Nigeria,” said Abdou Ali, a senior scientist with the organization. “Many areas of this region are drought prone. The ground-based data is not enough and even when the data exists, the transmission system is very weak.”

But researchers at Princeton University have come up with an approach to help overcome those problems using satellite data and historical records to track drought conditions as they emerge. Experts believe their monitoring project, installed in February at AGRHYMET’s research center in Niamey, Niger, may go a long way in addressing problems related to drought that have long plagued Africa.

“Water scarcity is a critical issue,” said Eric Wood, the head of the Princeton team and director of Princeton’s Program in Environmental Engineering and Water Resources. “What are the signatures in weather and climate that precede a drought? What takes you out of drought? If you don’t have the objective monitoring, you can’t do the predictions.” Because data is not available for many areas of the continent, the researchers use a mathematical model to simulate the water cycle and, from this simulation, determine when specific regions enter into drought. They combine patterns simulated from decades of climate records with current temperature measurements and with precipitation data from satellites. Essentially, the model maps the landscape and provides a likely estimate of hydrological conditions based on current inputs and historical patterns.

“The most important thing it gives you is spatial patterns,” said Justin Sheffield, a research scholar in civil and environmental engineering. “You can say this region is in drought and it has been in drought for the past several months.” 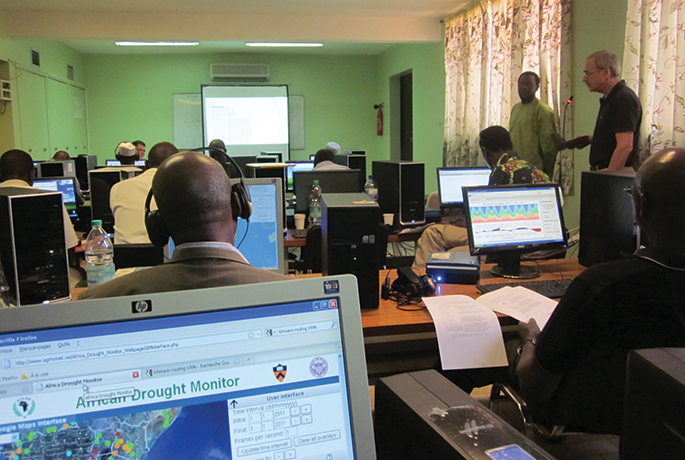 Putting those patterns together can be critical for agencies preparing to respond to famines or other crises spawned by drought. They may get very accurate reports from some regions, but a lack of information can make it difficult to respond to other areas.

“The difficulty often is connecting all the dots,” said Frank Catania, deputy director of humanitarian response for the aid organization Oxfam America. “You are seeing things in one area, but other groups are seeing other things in other areas. Who puts all that data together?”

Drought and floods account for 80 percent of deaths and 70 percent of economic damage caused by natural disasters in Africa, according to a 2007 report by the United Nations.

More recently, drought has led to widespread famine in East Africa, and there is concern about drought-related hunger in the Sahel region, the band of savanna that runs along the southern edge of the Sahara desert.

Support from the United Nations and NASA

A conversation at a 2006 international conference on the hydrological impacts of climate change led to a working arrangement between the Princeton team and the United Nations Education, Scientific and Cultural Organization (UNESCO).

“Africa is a priority for UNESCO, so it fits very well into the strategy to make sure that we have a system in place to have an early warning on drought,” said Siegfried Demuth, chief of hydrological systems for UNESCO’s Division of Water Sciences. “We are looking to provide the knowledge base, the tools, with which countries can be better prepared.”

Demuth said the drought monitor will also help countries plan for long-term water management, whether that involves water-supply projects or irrigation for agriculture. The ability to track water supplies over the long run – decades rather than years – can be critical to building reservoirs, planning for growth or for selecting crops.

Demuth said a priority for UNESCO was developing a tool that African researchers could refine and expand. To that end, the Princeton researchers have designed the system so that people using it can fine-tune its accuracy by comparing the model’s results with data taken from ground stations in their region, and can use the data for related research such as crop monitoring or climate change assessments.

“The hope is that we are going to build and expand on the idea through our African collaborative research network, which is supported through the University’s Council for International Teaching and Research,” said Wood, the Susan Dod Brown Professor of Civil and Environmental Engineering.

Wood said it was important for the project’s future that African researchers develop ways that the model can best suit local needs. He said the workers in the field also will be able to suggest ways to improve the model and to provide data that will lead to further refinement of its accuracy.

“We want the feedback,” he said. “We have the technology, the knowledge, to do this but what we need to know is how useful this is for people on the ground.”

The goal is to distribute information widely that can help people deal with water shortages before they become disasters.

“There may be another jump between what we are producing and what is really useful for people on the ground, but that is what we are relying on our collaborators for,” Sheffield said. “That is the kind of thing that interests me – turning this into a practical tool that can help save lives and prevent people from going hungry.”