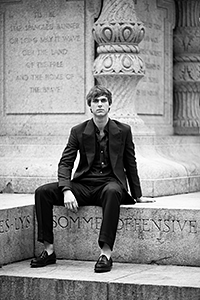 Carter Cleveland ’09, founder of Art.sy, says that as an undergraduate he was always interested in subjects such as dance and art history.

“I took many of those courses and at one point I was tempted to switch into art history to escape the huge engineering workload,” he said.

Instead, Cleveland figured out a way to combine his passion for computer science (his major) with his passion for the arts, coming up with the idea for Art.sy while sitting in his dorm room senior year.

Art.sy is a website that features all manner of art, ranging from Arabic calligraphy and African masks to Andy Warhol and Michaelangelo. The site is powered by what Cleveland calls “The Art Genome Project,” an algorithm that allows users to find new artists based on artwork they already know and like.

The concept is a close cousin to Pandora Internet radio’s “Music Genome Project.” Indeed one of Cleveland’s earliest advisers was Joe Kennedy ’81, the CEO of Pandora. Kennedy gave the keynote address at the 2009 Princeton Entrepreneurs’ Network conference and Carter approached him following his speech. A generation apart, the main difference between Cleveland and Kennedy seems to be that as an undergraduate majoring in electrical engineering and computer science Kennedy was dabbling not in art history but rather music theory – learning, for example, to compose his own Gregorian chants.

Cleveland’s Art.sy became hot almost the moment it hatched. In 2009, the concept (then called “Exhibytes”) took second place as well as the Audience Favorite award at TigerLaunch. It won the Rookie Award at the 2010 TechCrunch Disrupt event. And it has several million dollars in funding from top-drawer angel investors – among them Google’s Eric Schmidt ’76 and Jack Dorsey, the founder of Twitter and Square.

“People feel intimidated by the art scene,” says Cleveland. “This is unfortunate, because art is universal. It’s something that everyone should be able to enjoy, and we think that with the right technology, that’s possible.”