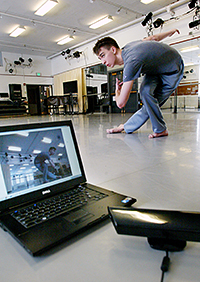 As Adam Stasiw moves through a dance, he creates a pattern of movement, timing and form.

An audience can sense the meaning intuitively, but Stasiw, a computer science major, wanted to view the message of the dance through a mathematical filter. So, for his junior-year independent research, he created a computer to analyze dance (shown in photo at right).

“I took the Microsoft Kinect and used its capability for skeletal tracking and used a machine learning algorithm to watch dancers,” said Stasiw, a senior who also is pursuing a certificate in theater. “By taking information about their positions and the velocity acceleration of their joints, I could come up with a way to model the dance expressively.”

Stasiw used a system called Laban movement analysis as part of the computer’s programming. Laban analysis, created in the early 20th century by choreographer Rudolf Laban, breaks a dance down into components of expression such as space, weight and time. Stasiw used those elements to mathematically describe the dance’s range.

“The type of dance does not really matter,” he said. “My training is in modern dance, so that is what I have used it for, but it would be really interesting to try it with tap or ballet.”

Stasiw used Wekinator, a machine learning language created by his project advisor, assistant professor of computer science Rebecca Fiebrink, Ph.D. ’11, to create his analysis program. Right now, he is using the program to analyze dance moves, but he said it could also be used to coordinate movements and effects in a live performance.

“I may end up using it in a dance thesis, but that is up in the air right now,” he said. “It is definitely interesting, this method of using computer science and art.”