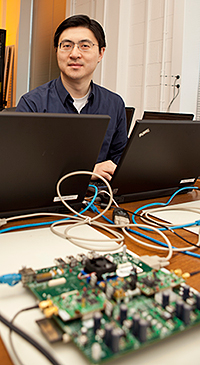 Chiang, a professor of electrical engineering, said he was “deeply humbled by this prestigious honor.” The award cites Chiang’s “fundamental contributions to the analysis, design and performance optimization of wireless networks.”

The Waterman Award is granted annually to an outstanding young researcher in science or engineering fields supported by the foundation. The award, open to researchers aged 35 and younger, provides a $1 million grant to support further research.

The founder of Princeton’s EDGE Laboratory, which works to bridge the gap between network theory and real world applications, Chiang has developed methods for analyzing the often complex interaction between different layers of wireless networks. In a field often characterized by ad hoc designs, his work reveals key principles in seemingly chaotic interactions and allows for systematic solutions to previously intractable problems. Chiang’s research has been applied to wireless network radio resource optimization, Internet congestion control and traffic routing, and fair distribution of resources in cloud computing.

“The Waterman is a great honor, and one that Mung richly deserves,” said Princeton President Shirley M. Tilghman. “He is both an outstanding researcher and a dedicated teacher whose students and colleagues have, in the course of his still young career, benefited greatly from his ability to bridge the gap between complex network theory and practical applications.”

Chiang is the fifth Princeton faculty member to receive the Waterman Award since it was first granted in 1976. Three of the others, mathematicians Charles Fefferman and William Thurston and physicist Edward Witten, were also winners of the Fields Medal, considered the top prize in mathematics. Gang Tian, the Eugene Higgins Professor of Mathematics, also has received the Waterman Award.

“It is a great pleasure to honor Mung Chiang with NSF’s most prestigious award designed to recognize outstanding young researchers,” said NSF Director Subra Suresh. “Dr. Chiang’s work links the worlds of theory and practice, and begins to close the gap between what is known today and what might be possible in next generation wireless networks. His scientific contributions are certain to continue to impact our lives.”

Chiang said he would use the grant to support what he terms his lab’s “feedback loop in networking research.” The loop starts with modeling and then analysis of networks and proceeds to the design and prototyping. That work is followed by data collection from the prototypes, which, in turn, informs new models and analysis. “We’ll use this funding support to build networks designed by the theories we develop, and prove theorems about the deployed networks,” Chiang said. “To address the tremendous challenges wireless networks face to meet the ever-rising needs of their users, we must keep generating sharp, new ideas.”

Chiang also praised the work of his co-researchers at the EDGE Lab. Among the group’s recent projects have been mathematical algorithms and applications that allow users to more efficiently manage interference among mobile devices and ongoing large-scale trials to deploy smart data-pricing to decrease congestion in wireless networks.

H. Vincent Poor, dean of the School of Engineering and Applied Science at Princeton, said that Chiang is also an outstanding teacher. “Mung is a tremendous asset to Princeton engineering and to Princeton more broadly,” said Poor. “Through his close and extensive interactions with industry, he has had a deep impact on the development of new generations of communications networks. At a relatively young age, he has already what most of us can hope to achieve in an entire career.”

Chiang’s undergraduate course is informally known as the “20 questions” class for the way he poses and helps students answer underlying questions about networks of various kinds. An online version of the course, “Networks: Friends, Money and Bytes,” has drawn more than 65,000 students since fall 2012. Chiang’s textbook for the course recently turned adaptive to individual readers’ needs and received the 2012 PROSE Award in Engineering and Technology from the Association of American Publishers. The book, called “Networked Life: 20 Questions and Answers,” now has an online, interactive component tailored to different levels of expertise among students.

A Fellow of the Institute of Electrical and Electronics Engineers, Chiang received the institute’s Kiyo Tomiyasu Award in 2012. He is also the recipient of a Presidential Early Career Award for Scientists and Engineers, the NSF and Office of Naval Research award for young investigators, and a Technology Review TR35 young innovator award. He joined the Princeton faculty after receiving his doctorate in electrical engineering from Stanford University in 2003.

The Waterman Award is scheduled to be presented on May 9 at the State Department in Washington, D.C.