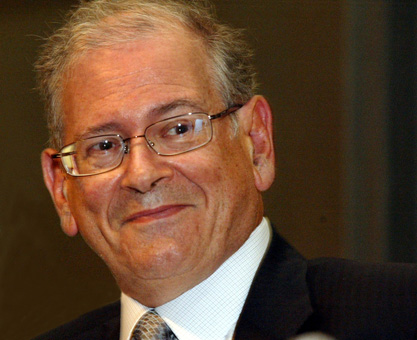 Alumnus Robert Kahn, widely cred¬≠ited with being one of the fathers of the Inter¬≠net, is one of the win¬≠ners of the first-ever Queen Eliz¬≠a¬≠beth Prize for Engi¬≠neer¬≠ing.

Organizers of the newly established prize cited Kahn, along with Louis Pouzin, Tim Berners-Lee, Marc Andreessen, and Vinton Cerf, for “major contributions to the development of the Internet and the World Wide Web.” Kahn and Cerf invented the Trans¬≠mis¬≠sion Con¬≠trol Pro¬≠to¬≠col (TCP) and the Inter¬≠net Pro¬≠to¬≠col (IP), the fun¬≠da¬≠men¬≠tal com¬≠mu¬≠ni¬≠ca¬≠tion pro¬≠to¬≠cols at the heart of the Internet.

“The Internet and www led to a communications revolution of unprecedented power and impact,” the prize foundation said. The prize, which was established by members of the U.K. Parliament and is administered by the Queen Elizabeth Prize for Engineering Foundation, includes a prize of 1 million pounds (currently $1.52 million).

Kahn founded and serves as chairman, CEO and president of the Corporation for National Research Initiatives, a non-profit for research and development related to the nation’s information infrastructure.

An endowed professorship in Kahn’s name was established at Princeton in 2007. Larry Peterson is currently the Robert E. Kahn Professor in Computer Science.