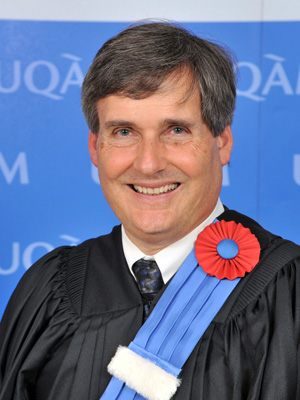 The University of Quebec at Montreal awarded an honorary doctorate to Princeton engineer Warren Powell for his development of quantitative approaches to complex operational problems, and particularly his transformative contributions to the field of transportation logistics.

Powell, a professor in Princeton’s Department of Operations Research and Financial Engineering, received the honor at the university’s graduation ceremony Nov. 16 in Montreal.

Another system developed by Powell’s research group performs real-time assignments of truck drivers and currently is used to dispatch 65,000 drivers every day for 20 of the largest truckload carriers in the United States.

Powell, who in recent years has focused his research on problems of uncertainty and decision making in the field of renewable energy, urged UQAM graduates to pursue emerging challenges facing society. “Modern logistics means that we are always competing against the entire world,” Powell said. “Many in developing countries face chronic shortages of food, water and electricity, while developed countries struggle with obesity. Global warming requires that we rethink our entire energy system. And the inequality of wealth is creating tensions that strain national identities. These are problems that need your talents.”

Powell graduated from Princeton in 1977 with an undergraduate degree and highest honors in engineering and earned his Ph.D. at the Massachusetts Institute of Technology. He joined the Princeton faculty in 1981. He wrote two textbooks and served as editor of another, and has published more than 190 refereed papers.