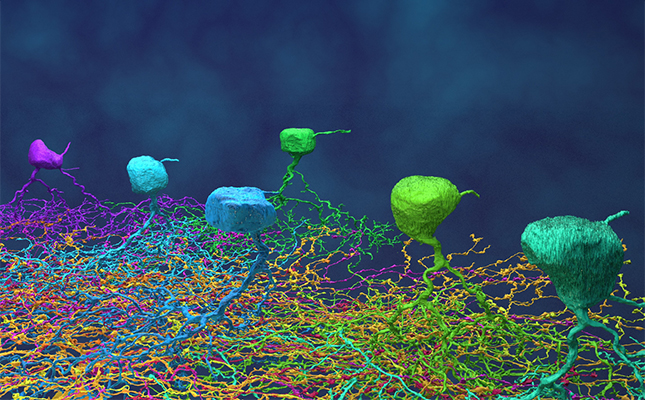 In a much-cited talk at a 2010 TED conference, Sebastian Seung introduced the proposition, “I am my connectome.”

Seung, a computational neuroscientist then at MIT, suggested that what makes a person unique is more than their collection of genes, or genome. Rather it is their connectome, the connections between all their neurons, that arises from genetics but is shaped by experience.

“The connectome is where nature meets nurture,” Seung said.

Seung joined the Princeton faculty in January, jointly appointed in the Department of Computer Science and the Princeton Neuroscience Institute. With him, he brings his ambitious plan to map the human connectome, which includes a popular online game he created to enlist people from around the world in tracing the interwoven tangle of neurons in the retina of the eye.

Called Eyewire, the game has engaged 120,000 people from 140 countries. Their online “play” already has contributed to a paper published in May in the journal Nature suggesting how the perception of motion arises from the structure of neuronal connections in the retina.

At Princeton, Seung plans to collaborate with neuroscientists who have developed sophisticated methods of recording neural activity associated with behavior and decisionmaking in animals. “The retina is a great way to understand perception,” Seung said. “We want to move beyond perception to cognition and learning and memory.” –Steve Schultz