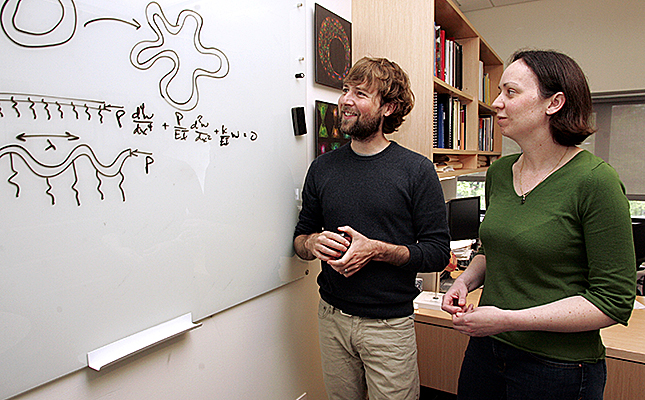 Like a tree sprouting from an acorn, a lung grows from a small tube of cells into an array of branches and stems. But unlike trees, which assume a dizzying variety of shapes and sizes, the branched network of airways in the lung takes a single, predictable form in each species.

Until recently, biologists believed this complex, yet exacting shape was formed by localized regions of rapidly dividing cells, which bud collectively outward to produce new branches. But research led by Celeste Nelson, an associate professor of chemical and biological engineering at Princeton, indicates that in some types of lungs, branching is driven by cells changing shape rather than dividing.

In one experiment, for example, Nelson’s team examined the development of the embryonic chicken lung. The lung begins as a tube of tissue, which sprouts buds that grow into the branches that conduct air. The researchers used a combination of mathematical modeling and experimental analysis to determine the physical and cellular mechanisms that initiate new airway branches.

Their results challenged the generally accepted view that localized patterns of cell division drive branching; instead, the researchers determined that changes in the shape of cells in the airway initiates new branches.

“Before branches form, the cells in the tube are roughly cube-shaped,” said Victor Varner, a postdoctoral researcher in Nelson’s lab. “These cells then become wedge-shaped at new branch points.”

The conclusions in the experiment are specific to avian lungs, but the lab is pursuing similar work in mammals, Varner said.

“Understanding how these complex tissues form will help us recreate their structure and treat problems related to their development,” Nelson said. “These blueprints might allow us to build replacement organs and treat congenital diseases as well as certain cancers.”

Nelson’s approach to investigating the development of tissues integrates several branches of engineering and biology.

Varner, whose undergraduate degree is in mechanical engineering and who worked at the NASA Johnson Space Center before coming to Princeton, said an important tool for the lab is mathematical modeling – writing sets of equations that describe the behavior of biological systems. Often, the complexity of embryonic tissues prevents a simple, intuitive understanding of their behavior, and math’s broader gaze is needed to quantitatively investigate them.

“From a mechanical perspective, developing tissues are soft materials that undergo large deformations -materials that are constantly growing in response to different biochemical and physical cues,” said Varner. “Mathematical models help us decompose these deformations into the part that’s due to biological growth and the part that’s due to the inherent elasticity of the tissue – how it responds to applied mechanical loads.”

The team also takes advantage of a novel approach in experimentation. Using a technique that Nelson originally developed as a postdoctoral fellow at the Lawrence Berkeley National Laboratory, the researchers etch patterns of tiny wells into collagen, which are then filled with epithelial cells. The cells grow into three-dimensional tissues that researchers control by the shape of the collagen molds. The researchers are able to use the shapes to study how mechanical stress affects the pattern of branching of the tissue.

“This platform creates a way to control the tissue microenvironment in culture in a way that you cannot in an embryo,” Varner said.

The researchers are extending their technique to examine other tissues that have implications for cancer research. The mammary gland, for example, also has branches, and the researchers are investigating how the gland’s branched structure is formed during development.

The researchers believe that understanding the cues that drive these invasive growth patterns, whether in mammary gland tissue or in cancer, could hold the keys toward developing more effective therapies for cancer patients.

“This field is particularly exciting because there is so much to learn, and anything we uncover may lead to promising new strategies to improve human health,” Nelson said.