John Danner moved across the auditorium at Princeton University, tossing questions at students about a possible business startup. Like an insistent collaborator, he probed for unknown hazards. What else, he prompted, what next? What was the thing they were not thinking of? What was lurking to trip them up?

“It has to scale,” said junior Rachel Leizman.

“Does it have to scale?” Danner asked, raising his hand to punctuate his question. “What about a small flower shop, what about a bodega?”

“Well, that’s a scale,” Leizman shot back, drawing a laugh from her classmates.

Danner, a veteran entrepreneur with a booming voice and an easy presence, used fast-paced dialogue and friendly banter throughout a recent session of “Introduction to Entrepreneurship” – a class taught for the first time this semester – to jolt his students into thinking in new ways about what it takes to start a venture. Proposals became epic stories; business plans were charts to guide an enterprise through hidden shoals waiting to sink an unwary new company.

“We want the students to develop their thinking and sophistication about how entrepreneurship plays out,” Danner, an entrepreneurship specialist at the Keller Center, said after class. “We want them to see this as an option, whether their motivation is to launch a new technology or a new industry or to change the world.”

The subject of the class is “entrepreneurship writ large,” said Derek Lidow, another instructor.

The course is open to students from all disciplines and allows undergraduates to work with a team of successful entrepreneurs: Danner, a business executive and senior fellow at the University of California-Berkeley; Lidow, the founder of iSuppli; Christopher Kuenne, the founder of Rosetta; and Ed Zschau, a founder and executive of numerous startups including System Industries in the 1970s and Polyera Corporation in the last decade.

The four instructors trade off lectures focusing on various topics. Danner, for example, taught one session about business models; Lidow lectured on critical points for developing a startup enterprise into an ongoing business.

“We are trying to get at the core issues that inform students about success or failure,” Lidow said. “If they only have time to take one course about entrepreneurship, then they can take this course and get a good understanding.” 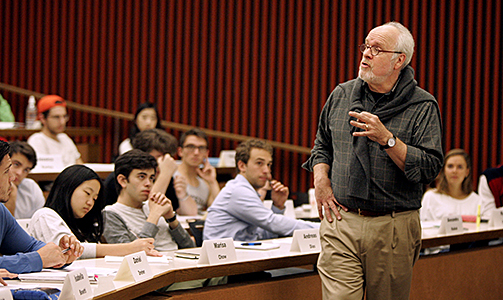 The idea for the course grew from a dinner among the instructors last year. Most entrepreneurship classes taught at Princeton target seniors, and they wondered whether it would be possible to involve students earlier. “Its objective as a survey course is to expose Princeton students, particularly sophomores, to the range of flavors and concepts of entrepreneurship early in their college careers,” said Zschau, who has taught entrepreneurship at Princeton for more than 15 years.

“We all had the experience of seniors saying ‘Gosh, I wish I had taken this earlier,'” Danner said. “We wanted to see if we could reach people earlier in their undergraduate careers; if they liked it, they would be able to pursue it.”

Eighty-six students signed up for the course this fall. The course number has an engineering prefix, EGR, but 66 of the students are pursuing Bachelor-of-Arts degrees. Because of its large enrollment, the course is taught in an auditorium in Jadwin Hall. In addition to standard classwork, the students keep an entrepreneurship journal to track their growing understanding of the material and possible applications to the world. Toward the end of class, the students split into groups to complete a project in which they flesh out an idea for a new venture.

“We don’t require a formal business plan at this level; it’s not about judging the idea the way an investor would,” Danner said. “We want to see evidence that the students have developed their thinking and sophistication about how entrepreneurship plays out.” 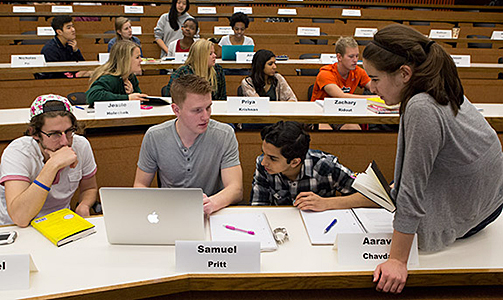 Students come to the class with a wide variety of backgrounds and interests. Some have a long interest in business and have already started ventures of their own. Others never thought of starting their own enterprise, but selected the course to see what it involved.

“I am considering entrepreneurship at some point in the future,” said Allie Burton, a sophomore majoring in computer science. “I have learned a lot more about the challenges that an entrepreneur faces; dealing with the lack of money, the stress, the challenge of organizing everything.”

Jessica Kariisa, a junior, said she never thought starting a business was “for me.”

“I thought I might be interesting to try it out and see if it changed the way I looked at things,” said Kariisa, a politics major. “It has.”

Kariisa, who is president of the University’s Black Arts Company: Dance, said taking the class has given her ideas about how she might pursue her interests in performance art and education after graduation.

“I have gained a lot of self-confidence,” she said. “I will definitely be more interested in the possibilities offered by entrepreneurship.” 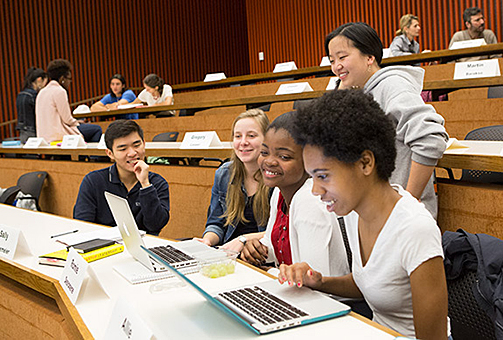 Leizman, an economics major, said she enrolled because the class will allow her to gain a broad understanding of the subject before choosing one of the more specialized, high-level entrepreneurship classes such as “High-Tech Entrepreneurship.” She said she intends to start her own business in the future and she “thought taking a survey course taught by the four professors would allow me to explore the different areas of entrepreneurship to see what I liked best.”

“One of the main things I’ve learned is that a great idea doesn’t automatically turn into a successful enterprise,” she said. “There are so many different factors – from funding to operations to the leadership – that make or break a good idea.”

The following courses are offered through the Keller Center in 2014-15.