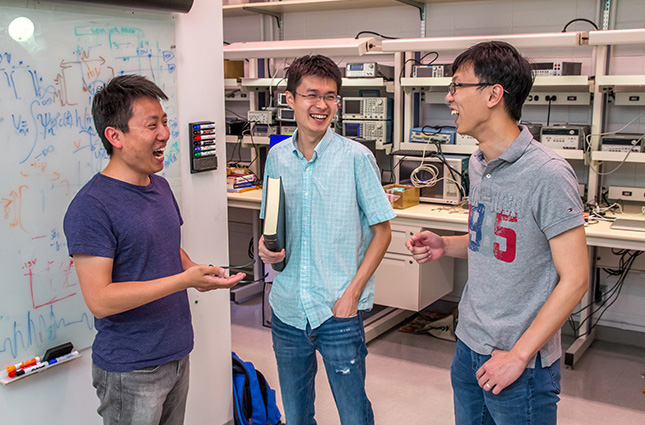 Operating rooms can be messy places – and the digital age doesn’t necessarily help. Hospital workers carefully sterilize all equipment between procedures but high-tech displays now frequently used during surgeries can be particularly difficult to clean. That is where a research team advised by Naveen Verma, James Sturm and Sigurd Wagner is working on a solution.

“A surgeon might have multiple images from a patient, and they might want to flip through them during a procedure – but they don’t want to touch anything that could possibly spread an infection,” said Verma, an associate professor of electrical engineering. “So we have been working on integrating 3-D gesture sensing into medical displays.”

Verma said that camera sensors often are unsuited to operating rooms both because of the lighting conditions and because cameras can have trouble focusing over the short distances between the surgeons and the displays. The team – graduate students Yingzhe Hu, Liechao Huang and Aoxiang Tang – uses the electric field from electronic components to sense changes in capacitance caused by a hand gesture. Those components are not affected by the lighting or the short distance.

When the team first developed the technology, they were thinking it would first find use as a way to control mobile devices or to play games. Verma said a grant from Princeton’s Helen Shipley Hunt Fund is allowing the team to stretch in a new direction and adapt the technology for medical use as well.

“In a way, it is a simple problem – you touch something and you get it dirty. They want to avoid that,” he said. “We believe our technology could offer a solution.”