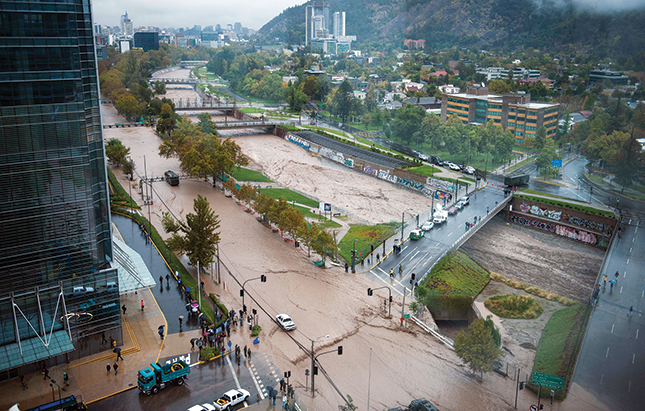 In the summer of 2015, a freak cold front swept across the Andes and poured rain that triggered flash floods across parts of Peru and northern Chile. The floodwaters overflowed streambeds and sent mudslides roaring through rural communities. In the aftermath, the Chilean government estimated that more than 27,000 people were displaced.

The following spring, a team of Princeton researchers traveled to Chile to meet with scientists there and begin constructing a new flood warning system for the country. Led by Eric Wood, the Susan Dod Brown Professor of Civil and Environmental Engineering, and Research Scholar Justin Sheffield, the team hopes to help Chile plan for and respond to similar disasters in the future.

“The goal is to take our existing continental-scale model for Latin America and to increase spatial resolution to focus on Chile and provide the foundation for an operational system,” said Wood, whose team previously developed hydrological monitoring systems for Africa, Latin America and the Caribbean, and the continental United States. “It will cover the entire country at a high spatial resolution, and our hope is that regular people can get direct access to the information.”

Sheffield said the team plans to assemble an online system, including maps, that will predict flooding seven to 14 days in advance. “It will be an operational forecasting system,” he said.

The project is an outgrowth of work that Wood and Sheffield have done in recent years predicting drought in Africa. The researchers have developed sophisticated models that combine historic climate-station data, satellite information, and field reports to forecast droughts and estimate their severity.

“One of the challenges, and one of the most exciting things, is bringing together these very diverse sources of data,” Sheffield said.

In Chile’s case, the government has a sophisticated weather forecasting system as well as river and rain gauges that the Princeton team will work to integrate with satellite data. The team also will help develop a system to interpret data and pass them along to users. Wood and Sheffield said that it is critical for the system to present information reliably and understandably. For the system to be of value, citizens and community leaders must have access to information they need to cope with floods or droughts.

“We are doing the science, but we also have to bring the information to the people on the ground who are making the decisions,” Sheffield said.