Most strategies to combat climate change concentrate on reducing greenhouse gas emissions by substituting non-carbon energy sources for fossil fuels, but a task force commissioned in June 2016 by former U.S. Secretary of Energy Ernest Moniz proposed a framework in December 2016 for evaluating research and development on two additional strategies: recycling carbon dioxide and removing large amounts of carbon dioxide from the atmosphere. These strategies were developed under a single framework with the goal to produce an overall emissions reduction for the Earth of at least one billion tons of carbon dioxide per year.

Task force members, including two Princeton Engineering faculty members, said that these approaches would complement carbon-free approaches based on electrification, including wind and solar energy, by fostering low-carbon strategies that retain liquid and gaseous fuels for distributive uses of energy in transport, buildings, and industry. These strategies could also enable overall net carbon removal from the atmosphere, if at some future time the world desires to reduce the global concentration of carbon dioxide. The task force considered only technologies that have the potential to achieve reductions on the scale of one billion metric tons of CO2 per year, which represents about 2.5 percent of annual global emissions (about 40 billion metric tons today).

Arun Majumdar, a Stanford University professor who chaired the Task Force of the Secretary of Energy Advisory Board, said that research avenues at such a large scale could potentially include utilizing agricultural crops to store more carbon in the soil, re-using carbon dioxide to form plastics and fuels, and storing carbon dioxide in massive underground reservoirs while producing some fuels.

“We are excited to have been able to provide the first steps toward a coherent strategy of research opportunities,” Majumdar said. “The range of options that are ripe for research is truly impressive.”

Sally Benson, a Stanford professor and a task force member, said a great deal of research is still needed on this process and others included in the report. “Each of the strategies we reviewed has its own research frontier,” she said.

Because these strategies rely on industry-level solutions such as removing carbon dioxide at the smokestack or changing farming methods to retain carbon in the soil, they require development of new technology and new industrial processes.

“The need is urgent, and we must develop and use multiple strategies to combat climate change,” said task force member Emily A. Carter, dean of the School of Engineering and Applied Science and founding director of the Andlinger Center for Energy and the Environment at Princeton University. “But pursuing these research avenues will benefit not just climate change. As we have seen for more than a century, investment in science and engineering research pays off in new technologies, new industries, jobs, and societal benefits far beyond the initial expense and in ways we cannot predict.”

The task force recommendations were delivered in a report to Energy Secretary Ernest J. Moniz on Dec. 13, 2016. John Deutch, an emeritus professor and former provost at the Massachusetts Institute of Technology and the chair of the Secretary of Energy Advisory Board, said in a letter to Moniz that the report “has painted a scientifically interesting agenda for decarbonization that should be of interest to the scientific community writ large.”

The task force – made up of experts from Duke, Harvard, Georgia Tech, MIT, Princeton, Stanford, University of Illinois and Washington University, as well as a former official from ExxonMobil – cautioned that the development of systems to reduce CO2 emissions at such a scale would be difficult and complex. The members also said some of the techniques could have unexpected outcomes and urged the government to invest in research to evaluate the impacts of the technologies, both intended and unintended, beyond their ability to reduce atmospheric CO2.

Taking steps to reduce atmospheric CO2 would require broad cooperation between academic researchers, government and policy leaders, and industry, the report concluded. An appendix to the report analyzes the flow of technology from labs to society and found all of these groups play a critical role in the development of new technology.

The task force made five recommendations about research and development:

– Improve and expand systems modeling. Members found that because of the complexity of large-scale CO2 reduction, improved models based on a systems approach are needed to evaluate impacts on the atmosphere, ecological systems, and the economy.

– Harness the natural biological cycle in which plants absorb and store atmospheric CO2. There is a need to evaluate how to optimize crops to absorb greater amounts of carbon dioxide and store more carbon in the soil for long periods of time, without a major increase in needed resources such as water and fertilizer; how to promote agricultural techniques that extend the time that carbon remains in the soil; and how to use various biological resources, such as giant kelp, as a stock for biofuels.

– Explore synthetic transformation of CO2 into useful fuels and products. Carbon dioxide can be converted to valuable chemicals and fuels but it requires energy to do so. A critical part of this system would be inexpensive carbon-free energy to drive this conversion. The task force recommended that the scientific community pursue research to explore better materials and systems that allow for reactions that would make CO2 conversion cheaper and more efficient.

– Evaluate the storage of CO2 in geologic formations. Past work on enhanced oil recovery (EOR) focused on minimizing the storage of CO2 to extract hydrocarbons. The task force recommended developing advanced EOR where one would co-optimize CO2 storage and hydrocarbon extraction in such a way that substantially more carbon would be stored than is extracted in fossil fuels.

“Our report should help people appreciate the immense effort that will be required to reconfigure our energy system to make it sustainable in the face of climate change, geopolitical stability, and responsible use of land,” said Robert Socolow, a professor emeritus of mechanical and aerospace engineering and co-director of the Carbon Mitigation Initiative at the Princeton Environmental Institute. “Our report provides a useful structure for addressing the pluses and minuses of several less familiar approaches.” 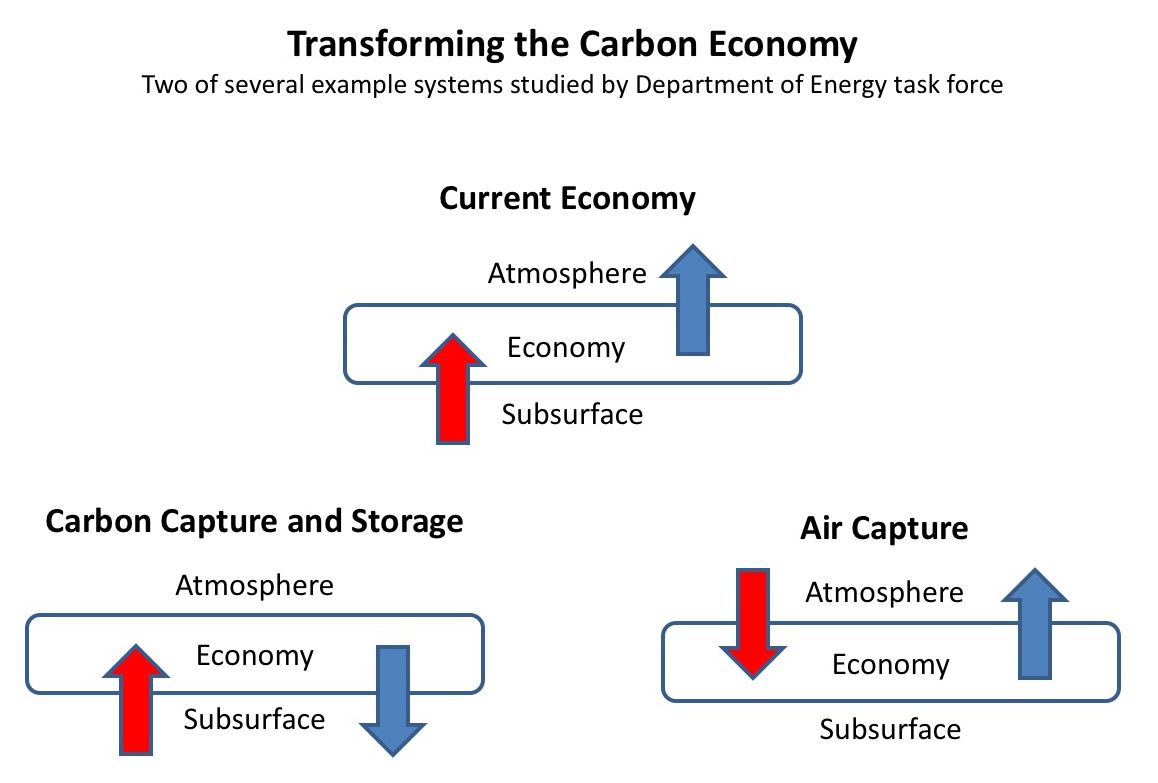