Members of the Class of 2017 marked a long list of achievements over their four years at Princeton from developing new ways to deliver anti-malarial drugs, to creating software that measures the stability of masonry arches, to building an app that uses a smartphone to measure the speed of a fastball.

“I want you to know how impressed our faculty are with you,” Dean Emily Carter told the graduates, their families and friends who gathered June 5 in the Friend Center courtyard for the annual Class Day ceremony. “We know you have already achieved so much, and we know you are ready for what lies ahead.”

Carter said members of the class had excelled in athletics, dance and music, and had served the Princeton community and the world. Many graduates will seek advanced degrees at top schools including MIT, Stanford and Caltech. Others will join employers such as Merck, Google and Lockheed Martin, will play professional sports or enter military service. Members of the class have been honored with National Science Foundation fellowships, Fullbright Fellowships and Gates Cambridge scholarships.

The Class of 2017 includes 308 Bachelor of Science in Engineering recipients.

“I want you to think of us as part of your lifelong community and extended family,” Carter told the graduates. “You will always be welcome here.”

The winners of major awards at the 2017 Princeton Engineering Class Day, as presented by Associate Dean for Undergraduate Affairs Peter Bogucki, were: 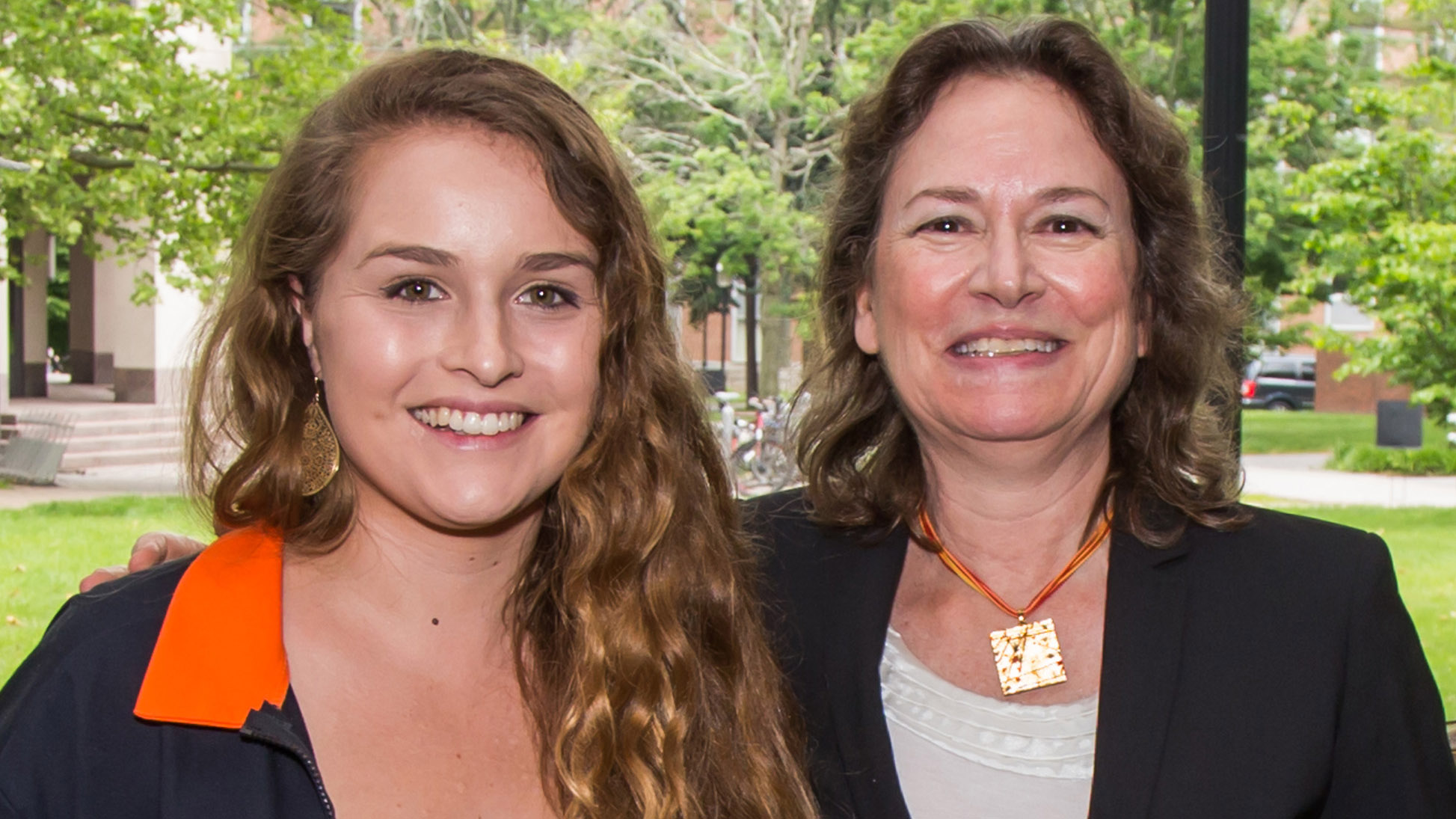 A mechanical and aerospace engineering major, Herrera conducted her independent work along with Isaac Ilivicky, Austin Pruitt, and Ben Sorkin on developing a modular battery pack for marine craft and for stationary energy storage. Assistant Professor Dan Steingart, the team’s adviser, said she assessed how the pack could be used for grid storage, with insights to increase flexibility. Herrera, of Westlake Village, California, will spend next year in Mexico on a Fulbright English Teaching Assistantship, after which she will join Deloitte.

A civil and environmental engineering major, Kavanaugh’s senior thesis presented a system to evaluate bridges’ conditions, and she applied the analysis to a bridge in Wayne, New Jersey. Her adviser, Associate Professor Branko Glisiƒá, said her work “paved the way to tighter collaboration with the New Jersey Department of Transportation.” Kavanaugh, of Northport, New York, will work as a project manager for the Defense Department at Minot Air Force Base in South Dakota.

A computer science major with a certificate in statistics and machine learning, Zaslavsky was part of a team that developed ReCal, a course-scheduling program now used by a majority of students. He also created a new structure, USG Labs, to develop and maintain student-developed software such as ReCal beyond their creators’ graduation. Professor Brian Kernighan praised Zaslavsky’s technical understanding and leadership skills. Zaslavsky, of San Diego, California, will pursue a doctorate in computer science at Stanford with a National Science Foundation Graduate Research Fellowship.

An operations research and financial engineering major with certificates in applications of computing, and engineering and management systems, Hoffman was vice president of Tau Beta Pi, the engineering honor society, and organized tours for prospective engineering students. He restructured the recruitment and assignment of guides and streamlined the operation. Bogucki said “Tyler has been an immense help to us in the Undergraduate Affairs Office.” A four-year member of the varsity lightweight crew team, Hoffman was a residential college adviser. Hoffman, of Farmington, Connecticut, will work at Alpine Investors.

An operations research and financial engineering major with a certificate in applications of computing, Miller was a leader trainer for Princeton University’s Outdoor Action program. Rick Curtis, director of Outdoor Action, said he epitomized the program’s motto of “leadership in service to others.” For his senior thesis, Miller developed algorithms to assign students to Outdoor Action trips, a non-trivial optimization problem. His software tool works substantially better than manual selection and will be used by Outdoor Action. As a project leader in the ESL-El Centro program, he trained student volunteers to teach English classes to adult students in Trenton. Miller, of Los Alamitos, California, will assume a Princeton-in-Asia internship in Thailand, after which he will work for McKinsey.

A civil and environmental engineering major with a certificate in sustainable energy, Turkmani worked to reconcile the tension between environmental sustainability and economic development, particularly in the developing world. For her senior thesis, she combined technical and socioeconomic perspectives in the analysis of synthetic fuels based on coal and biomass along with carbon capture and storage. Her adviser, Professor Catherine Peters, said Turkmani was able to “show that the cost of biomass feedstock rather than the cost of coal or electricity determines the ultimate value of this process.” She was also a participant in the Petey Greene Program, in which she tutored in math and reading at a youth correctional facility in Trenton, and was a four-year participant in Engineers Without Borders. Turkmani, of Washington, D.C., will study at Churchill College, Cambridge, as the holder of a Gates-Cambridge Scholarship.

A chemical and biological engineering major with certificates in engineering biology and ancient Roman language and culture, Dobrijeviƒá was a four-year member of Princeton’s varsity field hockey team. This year’s team made it to the NCAA final four, and Dobrijeviƒá was named to the NCAA Elite 90, composed of students playing in the championship round with the highest GPA in each NCAA sport. Her senior thesis explored a method of improving orally delivered anti-malarial drugs using nanoparticle formulation. Her adviser, Professor Robert Prud’homme, praised her insight and skill as a researcher and called her work “a potentially game-changing drug.” Dobrijeviƒá, of Sydney, Australia, will apply to medical school.

A mechanical and aerospace engineering major, Powers was the 2016 Ivy League pitcher of the year and a unanimous first-team All-Ivy player. This spring, he struck out six Cornell batters in his final collegiate start after striking out seven the week before at Columbia. The president of the Tau Beta Pi engineering honor society, Powers did two senior projects. The first, with classmates Brannon Jones and Caleb Peckham, concerned high-speed object control and tracking involving a robotic air hockey player. In the second, along with Chris Giglio, Powers designed an iPhone app to measure pitching velocity without a radar gun. Powers, of La Ca≈àada, California, will work as a management consultant at McKinsey. 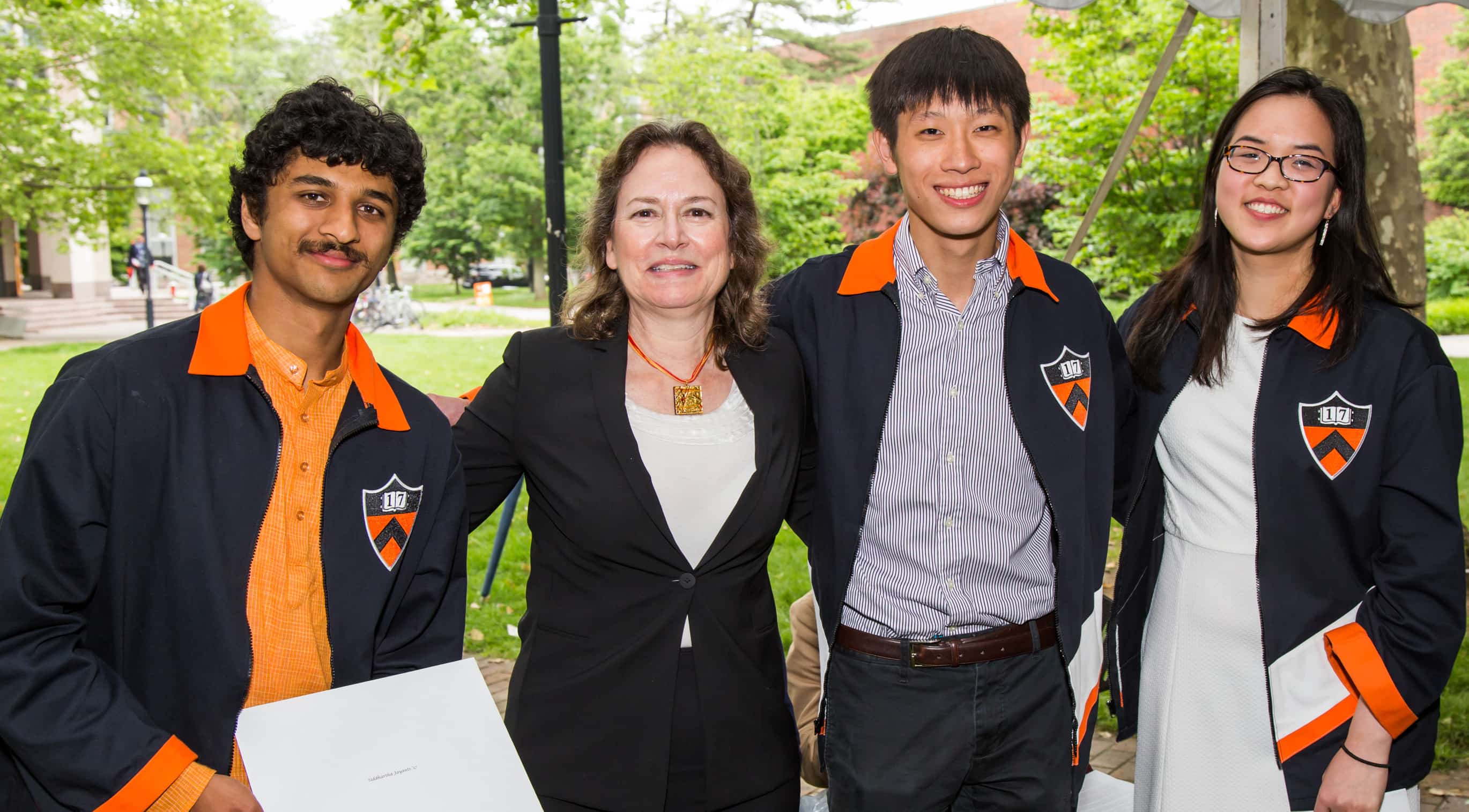 An operations research and financial engineering major with certificates in applications of computing, engineering and management systems, and statistics and machine learning, Hung’s thesis devised an investment system to help people escape poverty and create wealth in the developing world. He analyzed data from hundreds of thousands of loans to determine factors that affected repayment as well as showing the benefit of combining the loans into portfolios. His adviser, Professor John Mulvey, said the results can be immediately put to use. Hung also served as president of Engineers Without Borders. Hung, of Hong Kong, will work as an analyst at JP Morgan Chase.

A computer science major with a certificate in applied and computational mathematics, Jayanti’s senior thesis approached a classic problem in algorithm design called a disjoint set union. Most programs using disjoint set union employ sequential single-processor algorithms but Jayanti developed novel algorithms that execute the operations concurrently. His adviser, Professor Robert Tarjan, said it was thrilling to work with Jayanthi and that if he were a graduate student the research would justify the award of a Ph.D. He is a recipient of a Goldwater Scholarship. Jayanti, of Hanover, New Hampshire, will pursue a doctorate in computer science at MIT as the holder of a National Science Foundation Graduate Research Fellowship.

A civil and environmental engineering major with a certificate in musical performance, Fang’s senior thesis involved the development of a tool to assess the stability of masonry arches and vaults. Experts at Cambridge and MIT were surprised to learn that her work confirmed Milankovitch’s minimum circular arch thickness-to-radius ratio. She was advised by professors Sigrid Adriaenssens and Axel Kilian. Kilian said that Fang’s work “points toward great potential for investigation into traditional building techniques [using] contemporary analysis methods.” A violinist, she spent a semester at the Royal College of Music in London. Fang, of Dayton, Ohio, will attend MIT studying for a master of science in building technology.

An electrical engineering major with a certificate in applications of computing, Wang has a lengthy research biography. He worked on integrated circuits at the Applied Science and Technology Research Institute in Hong Kong, and for his junior independent work, he built a program that trains itself to recognize faces from just one image per subject with 97 percent accuracy. For his senior thesis, Wang designed an automated system to process dashcam videos to extract information on vehicle recognition, lane changes and speed. His adviser, Professor Paul Cuff, said the system will help understand driving behavior to validate innovations in vehicle technology. He served as a teaching assistant in computer science courses and in electrical engineering’s “Car Lab” class. Professor Andrew Houck, a car lab instructor, called him a “natural tinkerer.” Wang, of San Diego, California, will work as a software engineer at Google.

A civil and environmental engineering major in the architecture and engineering program, Douglas conducted independent work as a junior studying London’s Crystal Palace. A journal paper based on her research is forthcoming. For her senior thesis, Douglas studied Cuba’s National School of Ballet and found that its dome was constructed with a reinforced concrete grid and not tiled Catalan vaulting. She was advised by Professors Maria Garlock and Branko Glisiƒá. Garlock said Douglas’s work is “meticulous, rigorous, broad, deep and novel.” She was a member of Engineers Without Borders and a tour guide at the Art Museum. Douglas, of Bloomington, Indiana, will attend Stanford University to work on a master’s degree in civil engineering. 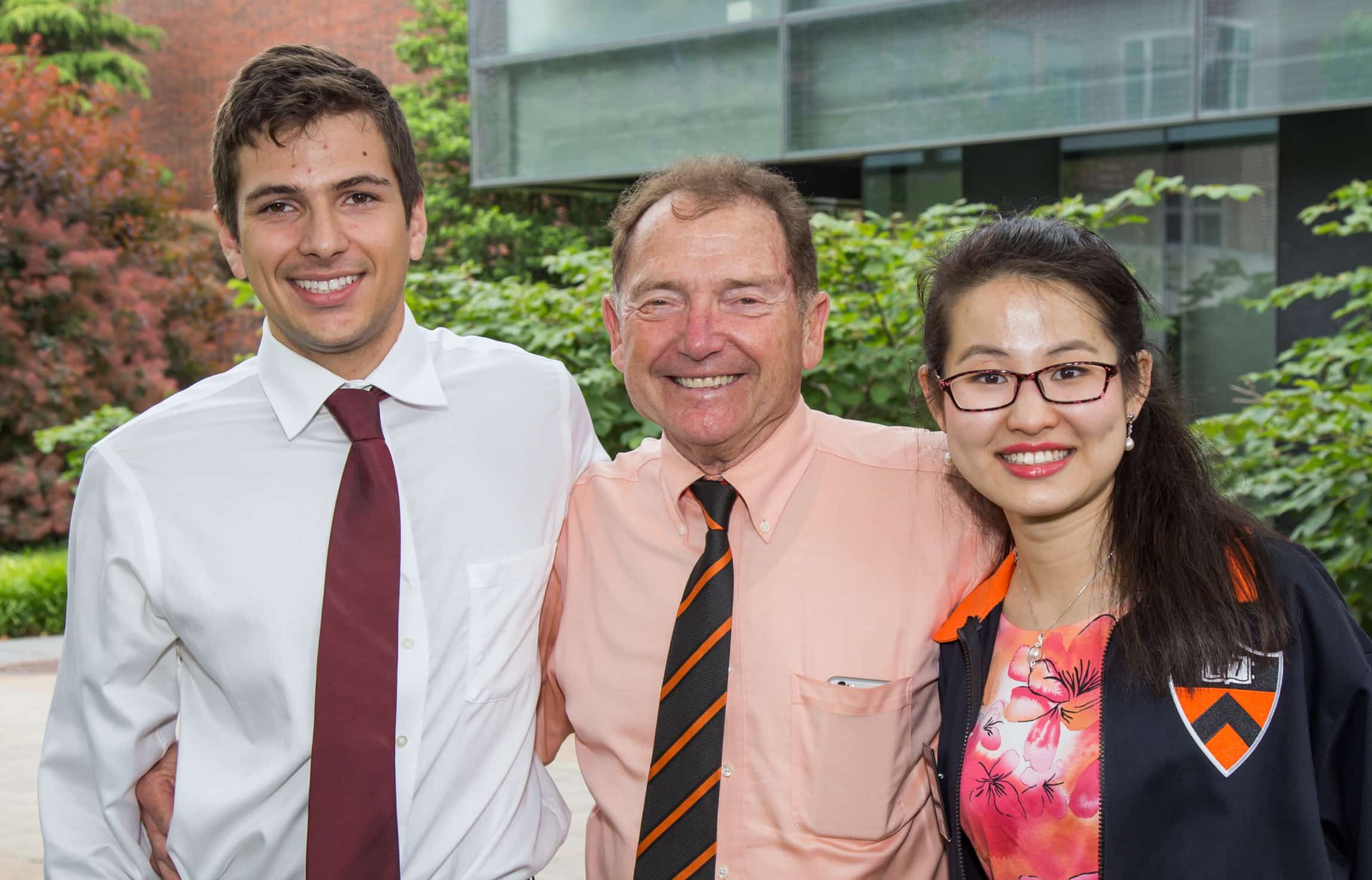 A computer science major with a certificate in statistics and machine learning, Feinberg has taken courses in 11 different programs and departments. He is a recipient of the Shapiro Prize for Academic Excellence, the George B. Wood Legacy Sophomore Prize and the Phi Beta Kappa Prize. He is a member of Phi Beta Kappa and Tau Beta Pi. His senior thesis, advised by Professors Kai Li and Barbara Engelhardt, was entitled “Large Linear Multi-Output Gaussian Process Learning.” When applied to foreign exchange rates and weather prediction, the work reduced computation time of problems from days to seconds. Li said he “has great potential to be a superstar in academia or industry.” He served as treasurer and an interactor of Tau Beta Pi. Feinberg, of Saratoga, California, will pursue a doctorate in computer science at the University of California Berkeley.

An operations research and financial engineering major with certificates in applications of computing, applied and computational mathematics, and statistics and machine learning, Liu completed courses in 14 departments and programs. She is the winner of the Shapiro Prize for Academic Excellence, the Freshman First Honor Prize, the George B. Wood Legacy Sophomore Prize, the Class of 1939 Princeton Scholar Award and the Bain-Swiggett Poetry Prize. She is a member of Phi Beta Kappa and Tau Beta Pi. Liu’s senior thesis, inspired by a talk she heard while an intern at Microsoft Research, uses modern statistical tools for generative modeling using deep neural networks to examine maximum mean discrepancy, a statistical measure of distance between distributions. Her adviser, Assistant Professor Han Liu, said the work demonstrated the depth and breadth of her knowledge of both statistics and machine learning. She served as a teaching assistant and grader in computer science courses and was the mentorship chair of Princeton Women in Computer Science. Liu, of Singapore, will study for a doctorate in computer science at the University of California Berkeley.