Rising temperatures will lead to extreme droughts in the Mediterranean regions of Europe by the end of the century, according to a recent multinational study led by Princeton researchers.

“The change in drought occurrence across Europe is staggering,” said Eric Wood, the Susan Dod Brown Professor of Civil and Environmental Engineering at Princeton. “In southern Spain especially, it’s been pretty dramatic.” The results of the study appeared in an April 23 article in the journal Nature Climate Change.

Seeking an unprecedented look at the future of water resources, the researchers worked with data at a resolution of five square kilometers across the entire continent of Europe. They ran the information through a cascade of computer simulations, using five climate and four land-surface models over three future climate-change scenarios, or Representative Concentration Pathways, as defined by the Intergovernmental Panel on Climate Change (IPCC). The results show how temperature and rainfall will affect drought through the year 2100.

No other study has applied such high-resolution data over such a large scale. And no previous study of soil moisture has used such a complex a series of models.

“Estimating temperature sensitivity on drought statistics was not possible before,” said Luis Samaniego, an author on the paper and a senior researcher at the Hemholtz Centre for Environmental Research in Leipzig, Germany.

Climate models alone provide only a coarse look at the available water resources in a given region. Due to recent advances in computation, the researchers were able to integrate the projections from the climate models with hydrologic models, which better represent the land surface. 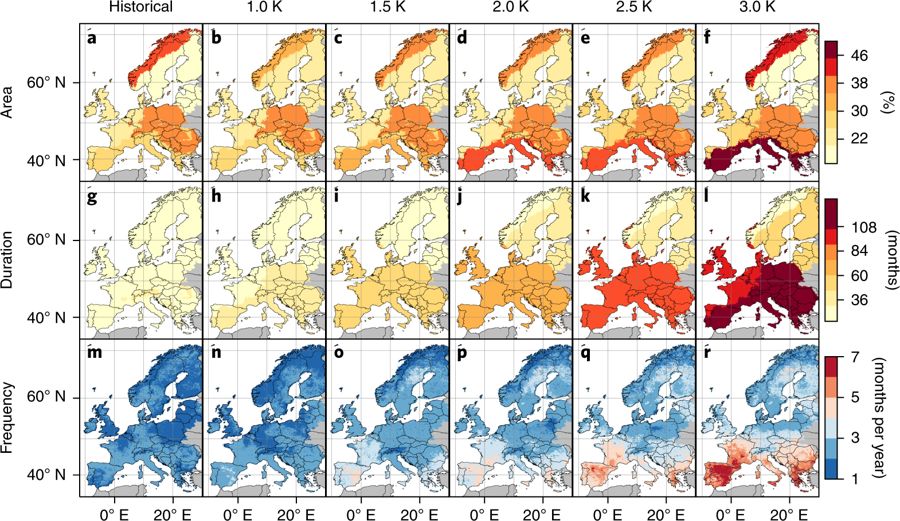 “Trying to understand how much water will flow down the river requires extra physics,” Wood said. “You need land-surface models to do that.”

The results showed that small increases in temperature will cause outsized increases in the severity and duration of European droughts. In one scenario, conditions similar to the deadly heatwave and subsequent drought of 2003 would become twice as frequent. In the worst-case, vulnerable areas could dry out permanently.

The researchers said Spain would be particularly hard hit. Not only is the land mass larger and situated farther south than its neighbors, Spain also relies heavily on agriculture and energy as major drivers of its economy. Those sectors rely on large amounts of available water to irrigate crops and cool power plants. Italy, although 40 percent smaller than Spain and situated farther north, could see proportionally similar effects.

Conversely, some far northern European countries are likely to experience an increase in rainfall over the same period. That may sound like good news for the Swedish farmer, bringing fewer frosts and cheaper irrigation. But the droughts are likely to intensify northward as global temperatures continue to rise.

Looking at the results, Samaniego is not optimistic. An outcome aligned with the goals of the Paris Agreement, Samaniego said, represents an uncomfortable but manageable scenario for societies to adapt and respond. But based on current trends, the planet will face conditions much hotter and drier than the Paris ideal. Samaniego called those more realistic conditions catastrophic. “No one would like to live in this kind of future world,” he said. “But this will be the world of our grandchildren.”

Wood hopes that future research will apply similar high-resolution and multi-model methods to other continents and regions. While the computations are time-consuming and expensive, the projections are crucial for resource management.

Hans-Otto P√∂rtner, co-chair of the IPCC Working Group II, which was not part of this study, agreed that “any heat wave lasting long enough, such as the one in 2003, will come with exacerbated impacts.” Like Wood, P√∂rtner stressed that more work needs to be carried out globally at a scale and resolution similar to the research in this paper.

The study combined work from six organizations in five countries. Their research was funded by the European Commission’s Copernicus Project.