Dean Emily A. Carter welcomed engineering alumnae at the 'She Roars' conference by noting that two Nobel Prizes awarded earlier in the week went to women associated with the School of Engineering and Applied Science.

The following is adapted from Princeton University’s news coverage of the She Roars alumnae conference. For full highlights, visit coverage of days one, two and three of the conference.

“Let us start by recognizing that the engineering school had a really good week,” Carter told alumnae gathered in the Friend Center convocation room. 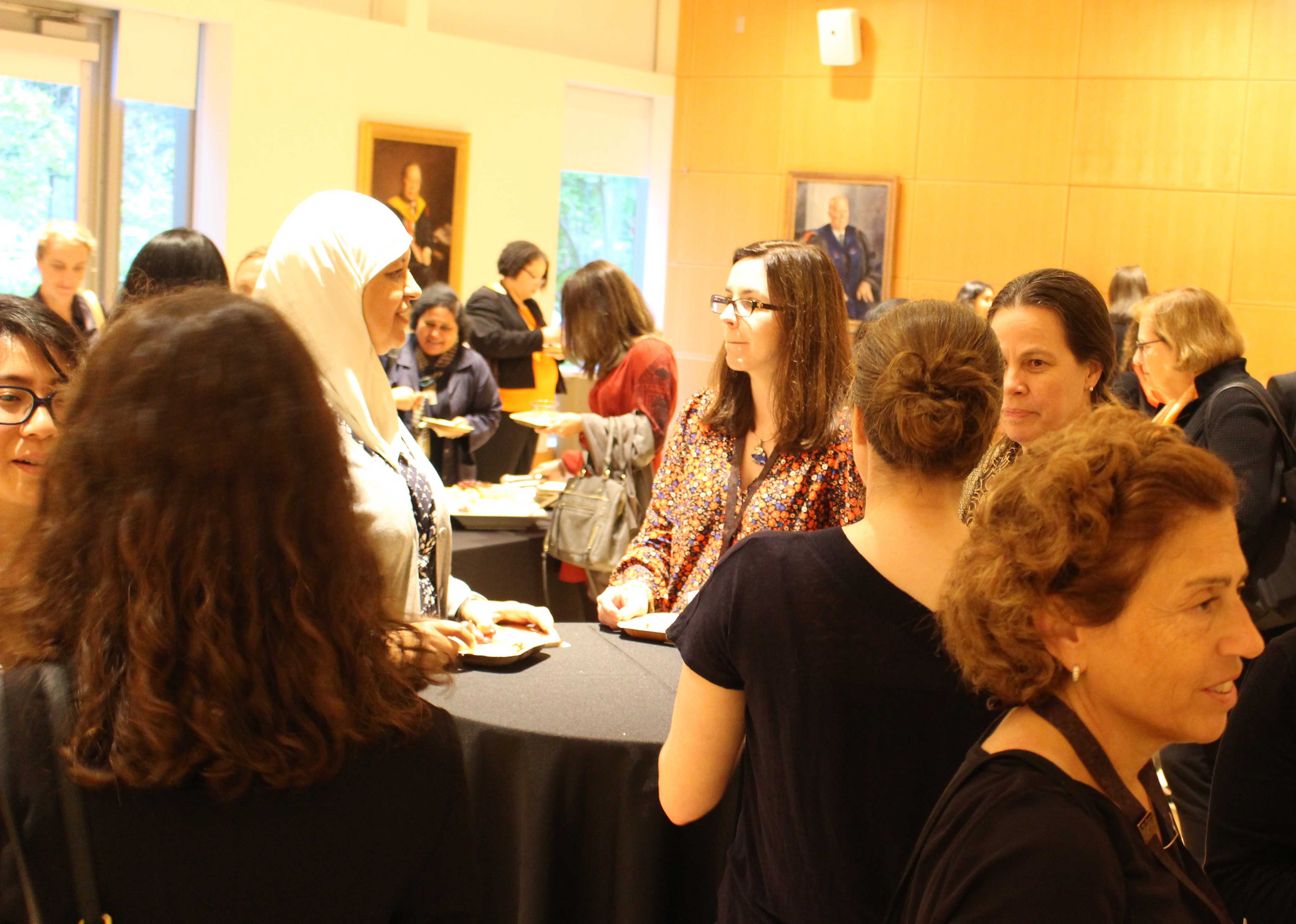 Carter contrasted the start of coeducation at Princeton, when there was one female engineering student in the first class of women who graduated in 1973, and today, when the last two years have set records for the percentage of women in the first-year class at 43 and 44 percent, respectively. Overall, she said about 38 percent of all undergraduates in engineering are women, 28 percent of the graduate students and 17 percent of the faculty. “So you see there is a drop-off,” she said, emphasizing that she wants to boost the numbers to 50 percent at all levels.

“So women are here, making a huge difference in the life and the direction of the school, but we have much more to do,” she said.

Carter outlined numerous initiatives at all levels to better attract, retain, inspire and propel women and underrepresented groups at all levels in the school.

“All of these efforts have made our community a more welcoming one,” she said. The future for women in engineering is bright, Carter concluded. “I firmly believe our mission resonates with young women: Create, Educate and Serve. Engineering involves creativity and teamwork. ‚Ä¶ Engineering, as I think of it, is science in the service of society. Women care about making the world a better place.

“I truly believe that the school of engineering at Princeton can help them – the women who want to make the world a better place – achieve their dreams, and my dream is to make that happen for them.” – Steven Schultz 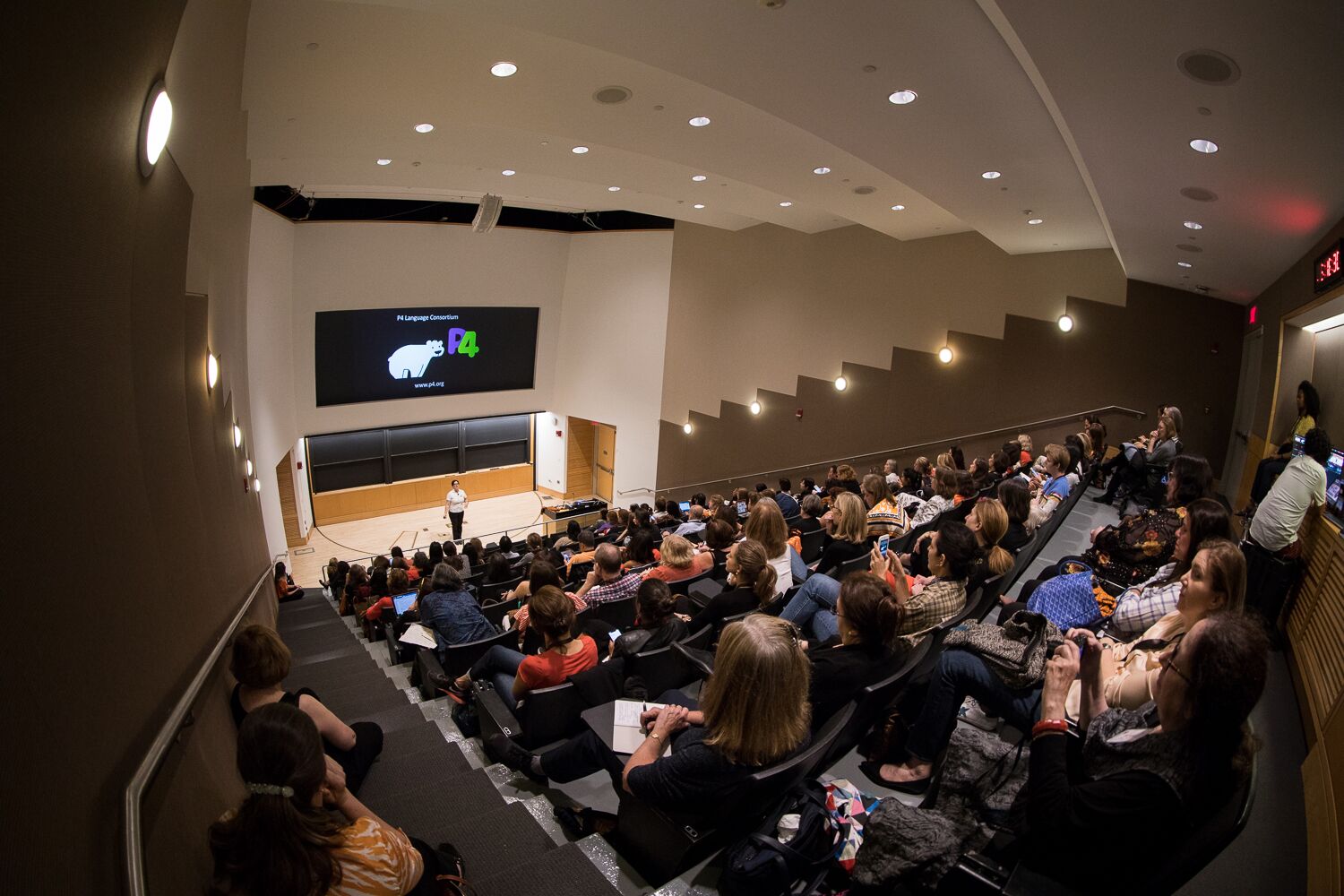 In her lecture “Reinventing the Internet” at McDonnell Hall, Jennifer Rexford, Class of 1991, said there’s a lot of room for innovation in the internet, but it’s going to be a long journey to see it realized.

The network of networks is designed to be programmable, but only at its margins, she said. At its core, it takes years for the internet to change. That’s even as there many opportunities to improve efficiency, performance and striking a balance between user privacy and transparency.

“Ironically, the internet itself doesn’t operate on internet time,” said Rexford, the Gordon Y.S. Wu Professor in Engineering, professor of computer science and the department chair.

She said she wants to keep pushing the limits, including more sophisticated algorithms, to create a better user experience. “These kinds of improvements are possible within our lifetime,” said Rexford, who is known for her research that looks at the most efficient and stable way to transfer information through the networks. She has worked on the Border Gateway Protocol, which helped establish ways to guide traffic among the many independent networks within the internet. – Aaron Nathans 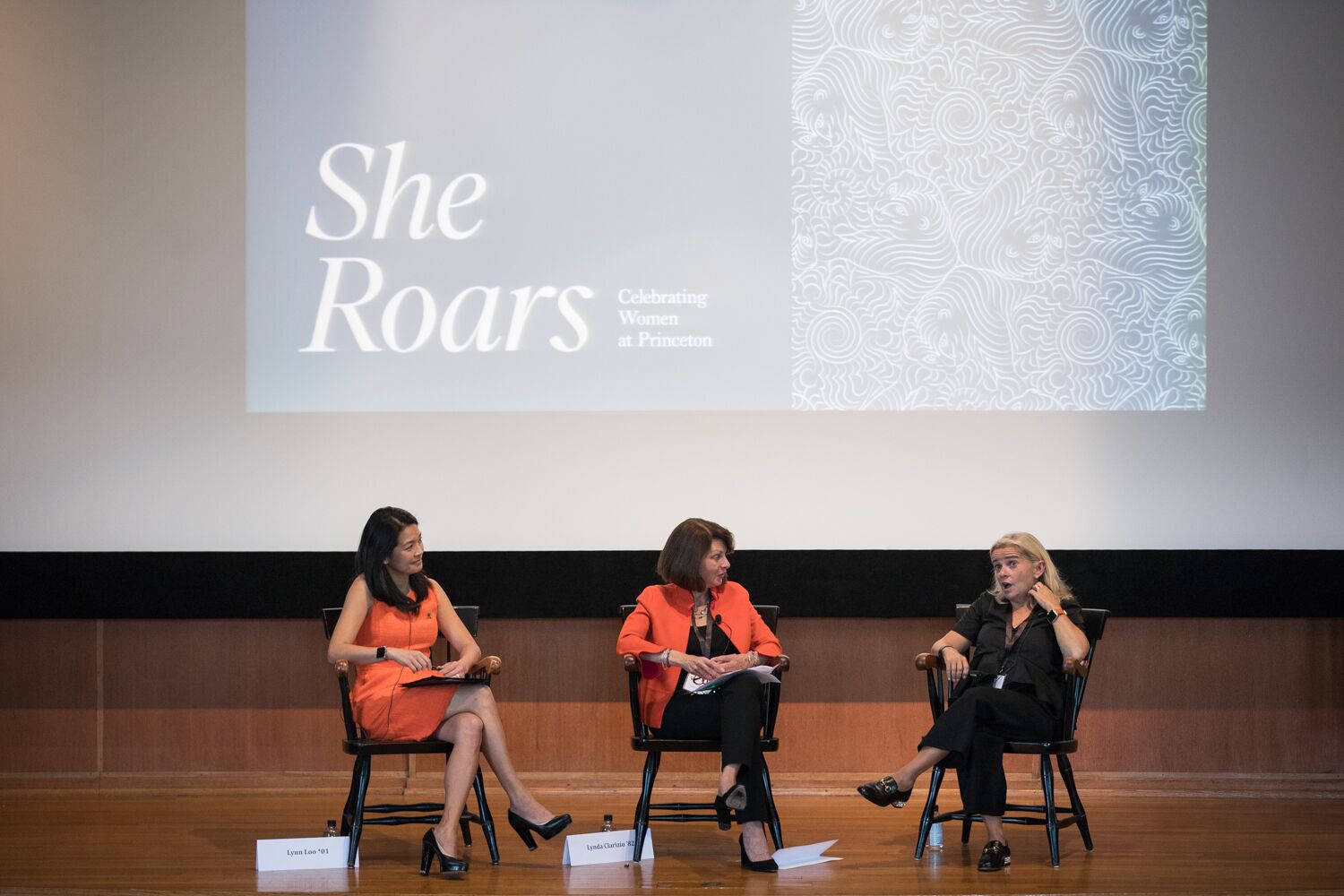 Lynn Loo, a 2001 graduate alumna and the Theodora D. ’78 and William H. Walton III ’74 Professor in Engineering, said, “We will also leverage our strengths in the liberal arts and engineering over the next 10 years to set ourselves apart from schools experienced in entrepreneurship like Stanford and MIT.”

Loo explained why she started a company around self-powering smart window technology: “With understanding the gravity and urgency of climate challenges, I felt it was important to do. It was a long time in the works. It was my grad student Nick Davy that really pushed to get the company established.” – Wright Seneres

In her talk “Fuels from Sunlight,” Emily A. Carter, dean of the School of Engineering and Applied Science, described how the 2007 report of the Intergovernmental Panel on Climate Change led her to an “epiphany” that inspired her to change the direction of her research, as she realized the evidence was overwhelming that carbon dioxide emitted from fossil fuel burning was causing global warming. Minimizing carbon dioxide emissions became the focus of her research. For the past decade, she has applied her expertise in quantum chemistry to investigate materials and processes for sustainable electricity and fuels. 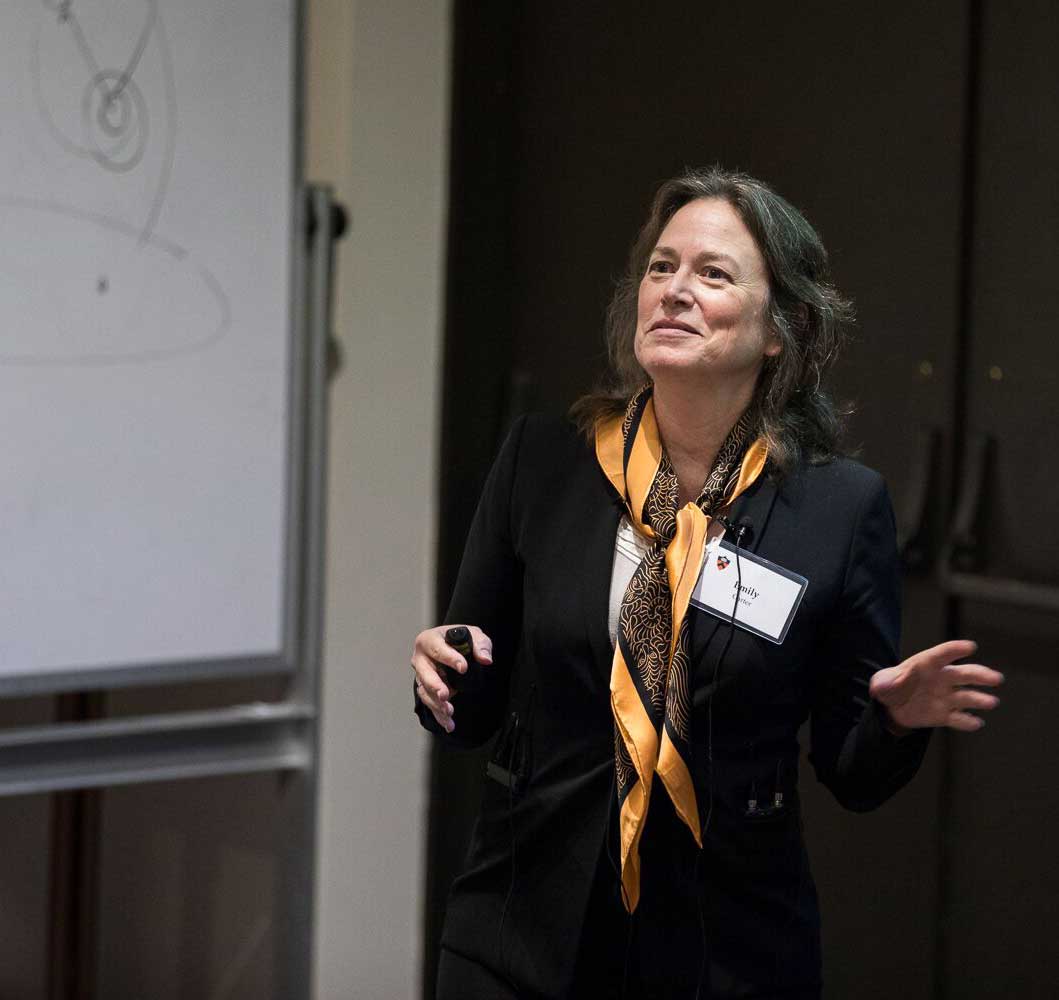 Carter advocated electrification to power the world, exploiting zero-carbon-emission energy technologies such as wind, solar, hydro and nuclear. However, she pointed out it is highly unlikely that large aircraft and other heavy-duty forms of transportation will be electrified and that energy-dense, liquid fuels will be needed to power them. Carter offered an overview of potential pathways to using renewable energy sources for artificial photosynthesis to create liquid fuels to replace fossil fuels. Part of Carter’s research involves the development of “photo-electro-catalysts” designed to enable efficient artificial photosynthesis of fuels and chemicals. However, she emphasized this only solves part of the problem.

“Ultimately, what we have to be able to do is to capture the carbon dioxide that’s already in the atmosphere, and essentially achieve negative emissions,” said Carter, the Gerhard R. Andlinger Professor in Energy and the Environment.

Following Carter’s lecture was a wide-ranging discussion on the future of energy and climate, including social and political issues. When asked about whether she has hope for moving toward more sustainable energy, Carter emphasized the need for the U.S. government to extend investments in basic and applied research, with environmental and economic security as major reasons for doing so. “I am a big believer in innovation to solve our most challenging problems,” she said. – Molly Sharlach

Barely a seat was left in the 250-seat auditorium of the Friend Center at 9 a.m. on Oct. 6 for a panel discussion entitled “Data Science: A View to the Future.”

“Data science is transforming every human endeavor and every academic discipline,” Jennifer Rexford, Class of 1991 and chair of the Department of Computer Science, said as she introduced a panel of three leaders in scientific, national security and business uses of data science. 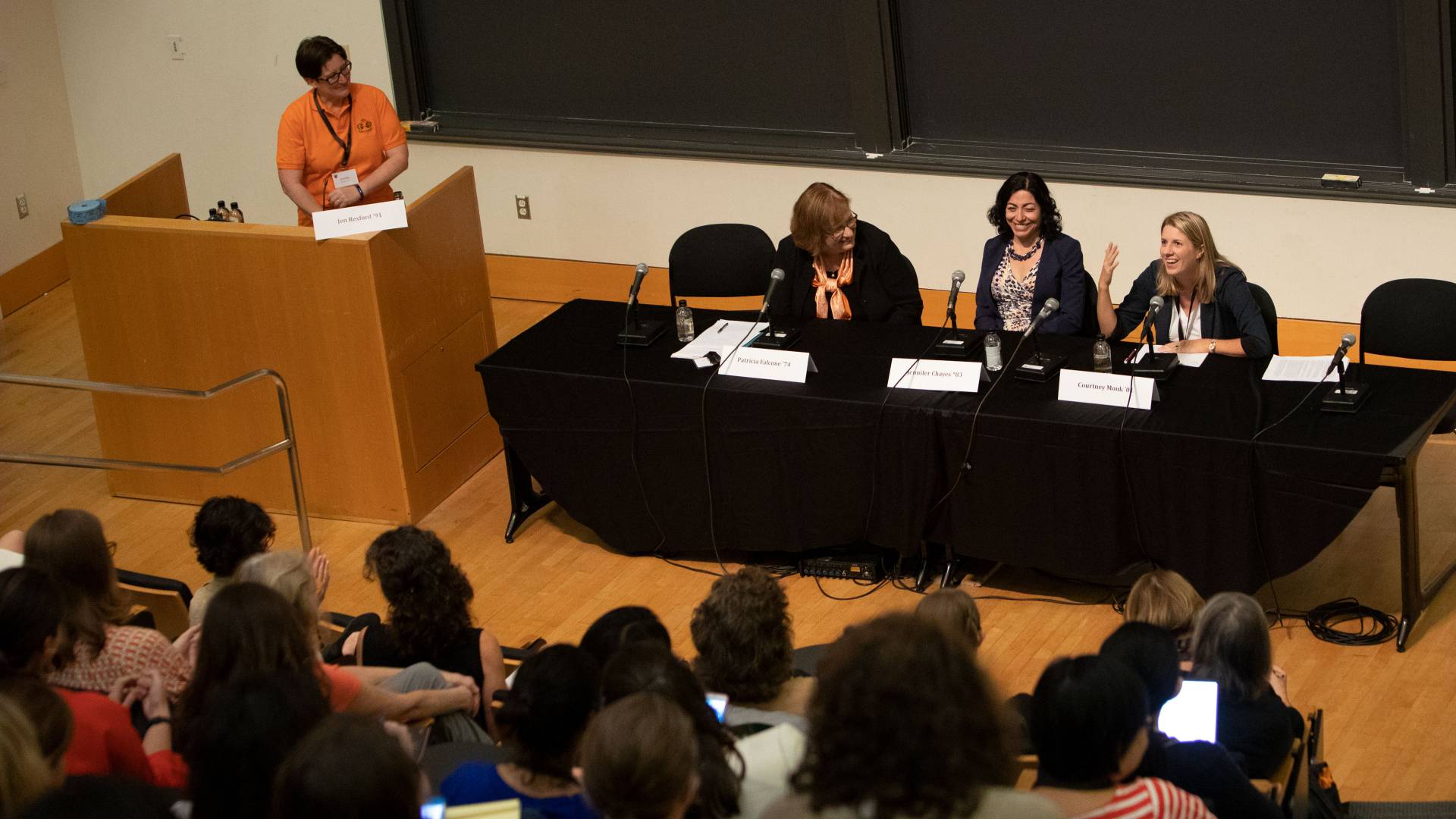 Rexford said this explosion of influence is happening because of the confluence of three factors: massive and diverse sets of data that are available from text, images, video, sensors and scientific instruments; computing and storage machinery that can analyze these data at very large scales; and the development of artificial and machine learning techniques “that have made it possible to convert that raw data into insight and knowledge and better decisions.”

The conversation and a vigorous question-and-answer session ranged from exciting emerging areas in the field to questions of privacy and security and how to bring a more diverse group of people into data science.

“Data science is critical for just about everything we do,” said Patricia Falcone, Class of 1974, deputy director for science and technology at the Lawrence Livermore National Laboratory. She said the lab analyzes data from around the world, from scientific measurements to social media data, to look for nuclear proliferation and other threats to national security.

Jennifer Chayes, who earned her Ph.D. in physics from Princeton in 1983, described her career going from academic research as a professor of mathematics to Microsoft where she founded a theoretical research group and now directs Microsoft Research labs in New England, New York City and Montreal. She said the Microsoft Research work spans from economics to social media to biomedicine, including harnessing the immune system to fight cancer.

“If any of you are young enough or have kids who are young enough to be thinking about what they might want to do in this world, doing data science in biomedicine is going to be one of the most exciting fields of the next few decades,” Chayes said.

Courtney Monk, Class of 2001, did research and analysis for the nonprofit Teach for America for nearly six years before joining the education technology company Chegg, where she is a data scientist doing business analysis. She said her Ph.D. in economics afforded her a surprisingly good foundation for data science because of its heavy use of statistics. “My pro tip for any of you who say ‚ÄòI can’t do data science because I don’t know anything about machine learning’ – two things: it’s not all machine learning; it’s all just statistics.”

The panelists agreed on the importance of all students, especially young women and underrepresented minorities, to learn math and statistics and to become familiar with computer science. “Numeracy matters,” said Chayes. “Computer science matters. You would never say ‚ÄòI was never very good at reading so I didn’t do it.'”