The ORFE “Fat Tails” placed 12th at an international trading competition in Montreal Feb, 4, beating out the two other American teams in the competition.

Members of the Fat Tails were Neel Gehani, Adam Epstein, Alex Thorn, Ed Tostanoski, and Raj Hathiramani, all juniors majoring in operations research and financial engineering (ORFE). The team drove to McGill University to participate in the trading simulation, the team’s first entry into such an event.

“Almost all of the teams who placed above us had participated in numerous other trading simulations so we faired quite well,” said Hathiramani. “We really learned a lot and hope to be able to participate again in similar competitions in the future.”

The Fat Tails borrowed their name from a statistical term that describes situations in which extreme events, such as a market windfall or a stock crash, become more likely than less extreme fluctuations.

Each team in the trading simulation was given control of a $200,000 portfolio at the start of the competition. The teams then traded stocks and call and put options based upon market “news” that was released every few minutes. 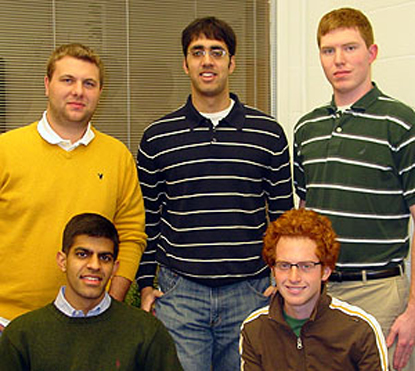 “There were four quarters and it took the first quarter to adapt,” said Hathiramani. “But in the last three quarters we really stepped up our game. It was interesting implementing a few team and individual option strategies we had discussed beforehand, thanks to our ORFE background!”

The McGill Trading Simulation, sponsored by the McGill Investment Club, drew 46 teams, mostly from Canada. The other American teams were from Michigan (ranked 26) and MIT (ranked 29). The winning team was from Université du Québec √† Trois-Rivi√®res.