Szymon Suckewer needs eye surgery, but he’s not going under the knife just yet-he’d rather wait until no knife is necessary. Having recently developed an incision-free eye surgery technique, he’s confident that will soon be an option. 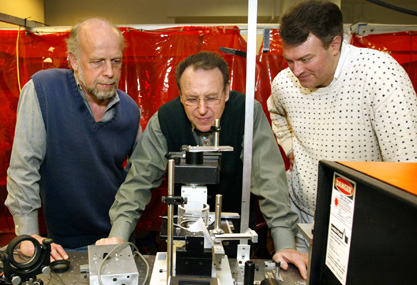 The breakthrough hinges on the use of femtosecond lasers, which deliver ultra-short pulses of light. Suckewer, professor of mechanical and aerospace engineering and co-director of the Program in Plasma Science and Technology, pioneered the development of these powerful devices in the 1990s.

The applications of the lasers for eye surgery were developed by a five-person team that includes Suckewer, chemical engineering professor Richard Register and Alexander Smits, professor and chair of mechanical and aerospace engineering. The three work closely with ophthalmologist Peter Hersh ’78, director of cornea and refractive surgery at the University of Medicine and Dentistry of New Jersey, and Peter Frederikse, an assistant professor of pharmacology and physiology at UMDNJ.

Current LASIK (Laser-Assisted In Situ Keratomileusis) surgery requires removal of a flap of the cornea before a laser (which produces a much longer blast of light than a femtosecond laser) is used to reshape the inner part of the cornea. Surgery done with femtosecond lasers will feature more precise cuts and eliminate the need for a flap, since they can create and travel through small channels in the cornea.

“The difference is like cutting with a pair of dull scissors versus a precise scalpel,” Suckewer said. “And, because it generates less heat and there’s no flap, there is also a much faster recovery period.”

The team also plans to use the ultrashort pulse lasers to enable the first surgical cure for presbyopia, the age-related vision loss that occurs as the lens stiffens and the muscles that focus it weaken.

Register’s materials science skills led to the creation of a polymer that can be used to replace old and damaged lens tissue. Since the substance is a liquid that rapidly gels to a solid, it can be injected through the small channels made by the laser. Smits’ expertise in fluid mechanics was critical in the development of a process to remove damaged portions of the lens and replace them with the polymer.

“It was important to match the physical properties of the lens with the polymer,” said Register, who directs the Princeton Center for Complex Materials. “This substance is chemically different, but it matches the stiffness and refractive index of the lens, so it focuses light in the same way.”

The new technique for flapless FemtoLASIK cornea reshaping will soon be tested on animals and then humans, and could be ready for use in hospitals within three to four years. The researchers are considering starting a company based on their work and are currently in discussions with potential investors. The team’s other projects include the development of a liquid bandage for corneal abrasions and the use of femtosecond lasers to reshape contact lenses.