Ten years ago, it would take ten days for Princeton biologist Edward Cox to separate a million base pair fragments of DNA by size-soon, he may be able to do it ten seconds, thanks to micron-sized devices being developed by a team of engineers, biologists and physicists.

The timesaving tools are the products of a collaboration between Cox and Princeton colleagues biophysicist Robert Austin and electrical engineers Stephen Chou and James Sturm, all experts in micro- and nanofabrication (the creation of devices with features between a millionth and a billionth of a meter-long). The team also includes Harold Craighead at Cornell University. 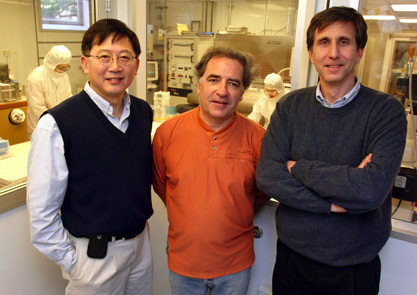 “I’m interested in attacking problems that can’t be solved by other methods,” Cox said, explaining his interest in harnessing microfabrication techniques for biological purposes.

Products of the interdisciplinary collaboration could one day advance the quest to analyze single cells, enable the rapid filtration of blood for transfusions, and allow for early detection of viruses-before they’ve caused any noticeable symptoms.

“There is a natural connection between biology and engineering right now because biological molecules are at the nanoscale and engineers are already working at that level for the semiconductor industry,” said Austin, citing nanoimprinting as a particularly promising way to create ever-smaller biological devices. That technique, which uses an ultra-small mold to create nanometer-scale features, was invented by Chou in the late 1990s. 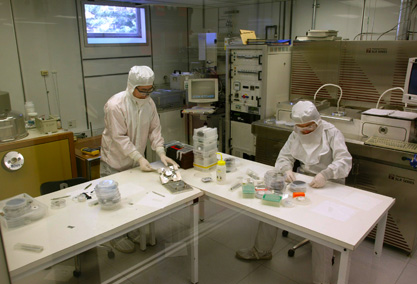 In a fruitful partnership, Austin worked with Sturm and electrical engineering graduate student Lotien Huang, who earned his Ph.D. from Princeton in 2004, to create devices that could sort biological particles far more quickly and with much greater resolution than was previously possible.

Huang then joined Living Microsystems of Watertown, Mass. to apply the technology in a way that may eliminate the need for amniocentesis-a prenatal test that involves entering the womb with a needle to collect fetal cells for analysis and carries a slight risk of miscarriage. Using the sorting technology developed at Princeton, the company is developing a way to screen a pregnant woman’s blood and catch the one-in-a-billion fetal blood cells that circulate in her bloodstream, eliminating the need to puncture the womb.

“The device can truly be used to find the needle in the biological haystack,” Sturm said, adding that the intersection between micro- and nanofabrication and biology is only just beginning. Its ultimate success will rest on the next generations of researchers, who must be fluent in the languages of engineering, physics and biology. “Students trained in collaborations like ours will lead the future-they have the advantage of being able to speak intelligently to people in all of these disciplines.”