Michael E. Wood, who earned a B.S. in mechanical and aerospace engineering from Princeton in 2008 and participated in the school’s Young Filmmakers program, is pursuing an M.F.A. in film at New York University’s Tisch School of the Arts. Over the summer of 2009, Wood created a video library of profiles of prominent Princeton Engineering alumni. In the interview below, Wood talks about the alumni videos, about his own undergraduate experience, and about how his engineering background informs his filmmaking. 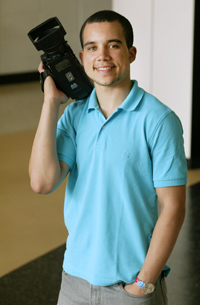 You asked all of your alumni subjects what advice they would give to themselves if they were just starting as freshmen at Princeton. What is your own advice?

Jeff Bezos’s answer really resonated with me. He talked about not chasing after what you might think would be most lucrative — but, rather, trying to find what you are genuinely interested in.

I think most Princeton freshmen come from a high school where they were encouraged to take courses they felt would look best on a college application. That mentality is hard to shake.

My advice to freshmen would be to take a deep breath and throw your high-school attitudes out the window. College is a time to explore known passions and find new ones. The more you can embrace that philosophy, the more enriching your undergraduate experience. That is easier said than done. Princeton can be a demanding place, especially the engineering school. You have to be proactive in your exploring.

When you were an undergraduate you won the Enoch J. Durbin Prize for Engineering Innovation and also received the George Bienkowski Memorial Prize. Does your engineering background give you an unusual perspective as a filmmaker?

It might be surprising to many people that my engineering training has been truly helpful in many respects to my filmmaking. Engineering gives you great ways of solving problems. Knowing that I have these tools gives me important confidence when problems seem challenging, even daunting. I like to start by making sure that I have a very precise definition of what the problem is –- an often overlooked step in filmmaking but something engineering trains you to do. Another engineering trick is reducing the scope of the problem with known constraints. In filmmaking, you can avoid a lot of headaches by using this technique.

My education in mechanical and aerospace engineering has been particularly useful in training me to communicate visual ideas effectively. A lot of concepts in MAE are about bodies in motion and being able to visualize their behavior. My best professors had a way of breaking down these complex ideas into simple language. Film is all about visual ideas, and things moving and changing over time. 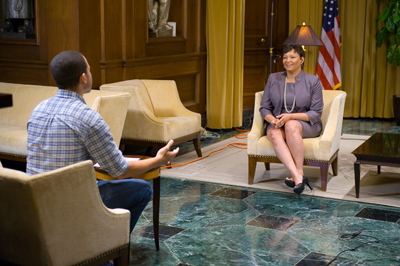 Ultimately, making movies is technical. Film is all about light and optics, something my physics classes gave me a grounding in. I have an affinity for sound recording because of everything I’ve learned about acoustics.

In certain respects, I’ve had to subdue the engineering in my brain to be able to open up as an artist. This brings up some of the advice that Eric Schmidt gave when I interviewed him for this alumni series. Schmidt said that it is paramount that over the course of our entire lifetimes we be open to the idea of change, because change is inevitable. Sometimes the change comes from the outside. But sometimes the change comes from the inside. In my case, I realized, probably not until some time in my senior year, that film was what stirred my passions.

You ended up composing original musical scores for all of the videos. Is this something you had done before?

I knew that music was going to play an integral role in the pieces and I spent a lot of time listening to stock libraries but to no avail. I had a really strong sense of what I was looking for and wasn’t finding it. I thought, why don’t I just try making it myself?

I had never composed a score before. I took piano lessons when I was younger but it was the typical kid-forced-to-take-piano-lessons-and-not-really-practicing story.

When I was an undergrad I took Paul Lansky‘s Music 104 class. The class was an introduction to music fundamentals but Lansky really emphasized composition. That class gave me the basic tools to make these scores. Interestingly, Lansky is one of Ge Wang’s mentors and my video of Ge was the first score I composed.

When you were an undergraduate you were a dancer and choreographer for DiSiac. Do you see any connection between dancing and filmmaking?

I definitely think dancing, choreography and filmmaking are all related. You can draw parallels between the stage in dance and the frame in filmmaking. Both are spaces in which you present things visually. Sometimes the camera stays still and the actors move within the frame. Other times, both the camera and actors move but are continuously connected through the action contained within the frame. This relationship between camera and actors is very much like a dance and is often highly choreographed. 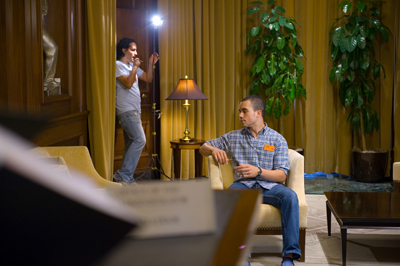 As a camera operator, sometimes you have to move like a dancer in order to keep the camera smooth. I feel that my dance background helps with this.

Dancing also gave me an appreciation and eye for detail, which is also very important in filmmaking. You have to be very, very serious about being precise when you are choreographing or dancing in a piece where everything is supposed to be in sync. Likewise, this precision muscle is something you have to exercise as a filmmaker. When you watch a really good movie, nothing is happening in that frame by accident.

One difference between dance and film is that with dance, unfortunately, you can’t edit out your mistakes.

Are there other non-academic undergraduate experiences at Princeton that helped prepare you for filmmaking?

I think everything I did at Princeton, inside and outside of the classroom has helped me, in some way. Movie-making is a multi-faceted discipline that requires many skills or, at least, the ability to connect and collaborate with many people with different skills. At Princeton, I picked up a lot of hobbies but also learned how to collaborate, work in teams, and on occasion, lead.

Making movies is expensive. As a filmmaker, no matter how good you are, you have to be an expert fund-raiser. Being on the Priorities Committee certainly taught me how to ask for money. It also taught me how to feel comfortable in a room full of people with intimidating titles and credentials — you just have to remember that they’re human beings too.

In my freshman year, I was also part of the team that helped launch BlackBox, a student-run night club on campus. I used to make a lot of the posters advertising the parties. They weren’t particularly good but it taught me graphic design and I’ve since then designed poster and DVD artwork for my films and a couple of my classmate’s films. These experiences have developed my eye for layout, which was helpful in creating the “Engineering After Princeton” theme and animation for the engineering alumni videos.

Working on BlackBox also taught me about production. Our five-person team, with the excellent vision and guidance of Marguerite Browning, Emeritus Master of Wilson College, we had to figure out how an emerging institution like this would run. There was no model for it so we had to build it from scratch. This is very similar to producing a film. Every movie is different and has needs that require the flexible adaptation of proven methods but also new inventive thinking.

Serving as vice president of Ivy taught me about finding compromise — usually this was between the wishes of the club’s undergraduate membership, its graduate board of directors, and that of the University. In film, you’re often struggling to find a compromise between your artistic vision, what resonates with your audience, and what you can get money for. 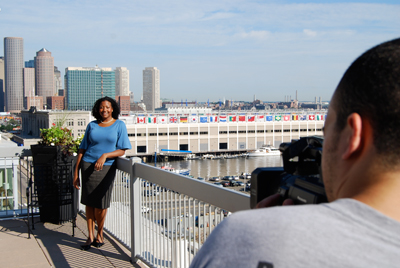 Ivy also taught me about leadership and the importance of confidence — or at least the appearance of it. Things can tumble into chaos when people lose faith in their leaders. I experienced this once at Ivy and learned my lesson. When people are following you, they want to feel like you know what you’re doing. Even if you don’t, they want to know that you’ve got a plan to figure it out. They want to feel safe under your guidance.

A professor of mine at NYU said that directing a film is like leading a group through a dark cave with a flashlight. Maybe you have no clue where you’re going but you better make sure you stay a couple steps ahead with that flashlight!