Note: The following is adapted from a news release issued by MIT.

A surprising insight into the way cats lap water may yield insights for robotics researchers interested in the efficient motions of animals, according to a paper published in the journal Science.

Researchers at the Massachusetts Institute of Technology, Virginia Tech and Princeton University analyzed the way domestic and big cats lap and found that felines of all sizes take advantage of a perfect balance between the physical forces arising from gravity and inertia.

High-speed videos revealed that cats, unlike dogs, do not dip their tongues into liquid like ladles. Cats form their tongues into a J shape like a ladle, but the smooth under side of the J barely brushes the surface of the liquid before the cat rapidly draws its tongue back up. As it does so, a column of water or milk forms between the moving tongue and the liquid’s surface. The cat then closes its mouth, pinching off the top of the column for a drink, while keeping its chin dry.

The liquid column, it turns out, is created by a delicate balance between gravity, which pulls the liquid back to the bowl, and inertia, which in physics, refers to the tendency of the liquid to continue moving in one direction unless another force interferes. The cat instinctively knows just how quickly to lap in order to balance these two forces, and just when to close its mouth. If it waits another fraction of a second, the force of gravity will overtake inertia, causing the column to break and the liquid to fall back to the bowl before it can be caught in the mouth.

The researchers complemented their observations with mathematical modeling, which allowed them to predict that larger cats would lap more slowly. They confirmed their results in video observations of adult lions, tigers and jaguars at Zoo New England. 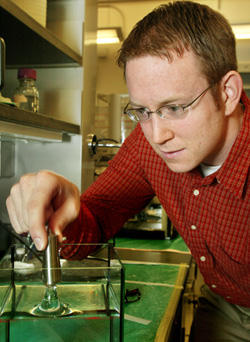 “The amount of liquid available for the cat to capture each time it closes its mouth depends on the size and speed of the tongue,” said Jeffrey Aristoff, a postdoctoral researcher at Princeton’s Department of Mechanical and Aerospace Engineering. “Our research – the experimental measurements and theoretical predictions – suggests that the cat chooses the speed in order to maximize the amount of liquid ingested per lap.”

Aristoff, whose regular work applies mathematics to the study of liquid surfaces, said the team benefitted from the diverse scientific backgrounds of its members, who also included Roman Stocker and Pedro Reis of MIT and Sunghwan Jung of Virginia Tech. Together, their fields span engineering, physics and mathematics.

The researchers noted that the complex and efficient movements of muscles in the absence of bones – from octopus arms to elephant trunks – are fascinating to researchers in the field of robotics.

“The functional diversity and high compliance of these structures continue to inspire the design of soft robots,” the authors wrote, “and a fundamental understanding of their functionality can lead to new design concepts and is essential to inform biomechanical models.”

The researchers said they hope their work, which found interesting science in an everyday observation, inspires students to pursue science.

“Science allows us to look at natural processes with a different eye and to understand how things work, even if that’s figuring out how my cat laps his breakfast,” said Stocker, who usually studies the fluid mechanics of the movements of ocean microbes. “It’s a job, but also a passion, and this project for me was a high point in teamwork and creativity. We did it without any funding, without any graduate students, without much of the usual apparatus that science is done with nowadays.”

“Our process in this work was typical, archetypal really, of any new scientific study of a natural phenomenon. You begin with an observation and a broad question, ‘How does the cat drink?’ and then try to answer it through careful experimentation and mathematical modeling,” said Reis, a physicist who works on the mechanics of soft solids. “To us, this study provides further confirmation of how exciting it is to explore the scientific unknown, especially when this unknown is something that’s part of our everyday experiences.”