Brian Kernighan, who has rock star status in the world of computer science, has self-published a new book that distills his popular Princeton University class “Computers in Our World” into a couple of hundred readable pages. 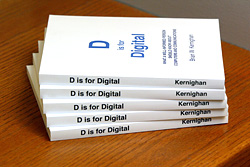 D is for Digital is the flip side of The C Programming Language, the 1978 book co-written by Kernighan and Dennis Ritchie, which was central to the development and popularization of the C programming language. Translated into scores of languages and a classic in the field, that book, however, was written strictly for computer programmers.

By contrast, D is for Digital is a primer for a lay audience, valuable to everyone from liberal arts majors to policy-makers.

Kernighan, who earned his Ph.D. from Princeton in 1969, worked at Bell Labs for several decades and contributed to the development of Unix, a widely used computer operating system. He also is coauthor of the AWK and AMPL programming languages. Kernighan joined Princeton in 2000 as a professor of computer science.

Below is a Q&A with Kernighan, who contends that all citizens should understand more about computing so that they can form more intelligent opinions about government policies on Internet privacy and wiser decisions about everything from what they share on social media to how they use their cell phones.

Why should I care about computers?

Because they affect you personally. No matter how non-technical your life and work, you’re going to have to interact with technology and technical people. If you know something about how devices and systems operate, it’s a big advantage.

When you say “computer,” what do you mean?

Computers and computing are all around us. Some computing is highly visible, like your laptop. But this is only part of a computing iceberg. A lot more lies hidden below the surface. We don’t see and usually don’t think about the computers inside appliances, cars, airplanes, cameras, smartphones, GPS navigators and games. And we don’t think much about how infrastructure depends on computing: the telephone network, television and cable, air traffic control, the power grid, banking and financial services all depend on computers. Computers really are pervasive.

So how does this affect me?

If you don’t understand viruses, phishing, and similar threats, you become more susceptible to them. If you don’t know how social networks leak information that you thought was private, you’re likely to reveal much more than you realize. If you don’t realize how commercial interests exploit what they have learned about your life, you’re giving up privacy for little benefit. If you don’t know why it’s risky to do your personal banking in a coffee shop or an airport, you’re vulnerable to theft of money and identity.

Are you sure you’re not just being paranoid?

Well, it’s probably good to be a little paranoid-even paranoids have enemies. Technology is mostly a force for good, but it has its downsides too, I want my students – and my readers – to be intelligently skeptical about technology, and be informed about the good and the not so good parts.

Computers are so pervasive that it’s hard to avoid their effects on privacy. For example, surveillance systems are growing like wildfire. Electronic voting systems have had major security flaws.

I think that the most obvious and perhaps the most worrisome issue for individuals is the impact of technology on our personal privacy. For example, our cell phones report our locations all the time. Social networking sites capture an enormous amount of information about our activities and relationships. The tracking that we permit without even thinking about it makes the monitoring in Orwell’s 1984 seem totally harmless.

In your book you quote the Arthur C. Clarke line about any sufficiently advanced technology being indistinguishable from magic. Why?

It’s a great line. The purpose of the book is to remove any vestige of magic, so readers will understand how such systems operate. How can pictures, music, and movies be sent around the world in no time at all? How does email work? How private is your email? Why is spam so easy to send and so hard to get rid of? Do cell phones really know where you are? How do iPhones and Android phones differ and why are they fundamentally the same? By the end of the book you should have a pretty decent idea of how computer and communications systems work and how they affect you.

The records of what we do and where we do it are likely to live forever. Digital storage is so cheap and the value of data is high enough that information is rarely discarded. If you post something embarrassing online or send email that you subsequently regret, it’s too late. Even worse, information about you can be combined from multiple sources to create a detailed picture of your life, and is typically available to commercial and government interests without your knowledge or permission. It is likely to remain available and could surface to embarrass or harm you at any time in the future.

The societal mechanisms that protect our privacy and our property have not kept up with the rapid advances in technology. Technological change is not an isolated event but an ongoing process – rapid, continuous, and accelerating. Fortunately, the basic ideas of digital systems will remain the same, so if you understand those, you’ll understand tomorrow’s systems too, and you’ll be in a better position to deal with the issues and the opportunities they present.