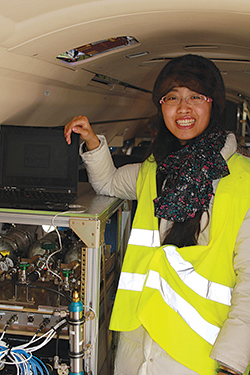 Mark Zondlo and his research team frequently find themselves 45,000 feet above the Earth looking for water vapor in the upper reaches of the atmosphere.

From a seat in a National Science Foundation (NSF) research jet, the engineers can search a slice of the sky for pollutants and gases that play a role in climate change. Zondlo, an assistant professor of civil and environmental engineering, said that water plays a greater role in climate change than many people imagine.

“If we want to understand where the Earth’s climate is going in the future, we have to understand water vapor,” Zondlo said. “It is the dominant greenhouse gas.”

Zondlo said that even small increases in water vapor enhance the effect of other greenhouse gases by as much as 30 percent. Much of his research in recent years has focused on how water in the upper atmosphere affects clouds, one of the most difficult aspects for climate models to predict.

“We are trying to understand the mechanisms for it – how does water get transported up there, how do clouds form?” he said.

Last September, Zondlo and his coresearchers participated in the final flights of the HIAPER Pole-to-Pole Observation (HIPPO) mission, an NSF project that used a specially modified jet to take atmospheric measurements from the Arctic to the Antarctic. The mission gave researchers a clearer picture of gas concentrations at varying altitudes and provided the first global insights into ice-cloud formation.

“From a water vapor perspective, HIPPO was very important,” Zondlo said. “You can measure it through satellites, but you can’t measure it at cloud scales like you can with the aircraft.”

Zondlo and his team are now part of a new series of flights over the Rocky Mountains and the American Midwest called the Deep Convection Clouds and Chemistry Experiment. That project, under the auspices of the NSF and NASA, will look at how thunderstorms lift pollutants into the upper atmosphere.

“We are looking at thunderstorms over Colorado, the Great Plains and over the Gulf Coast states,” he said. “We are trying to look at different sources for the air and how they impact the climate above.”

After that project, Zondlo’s team is off to Thailand where they will examine polluted conditions high over Southeast Asia.

“Changes in the upper atmosphere drive the climate of the Earth,” he said. “That’s where water vapor has its biggest impact.”