ABOUT THE GRAPH ABOVE (click here for a pdf of the full spread):

Juniors Ankit Buddhiraju and Kevin Lin analyzed conversation threads among a small subset of learners in the Coursera class, “Friends, Money and Bytes,” led by Professor Mung Chiang and Chris Brinton, to develop an online recommendation system that helps instructors organize topics and match learners to other learners who have similar interests or who might be able to help with assignments.

The blue dots above represent key concepts discussed during the online lectures (those closest to the middle are the most discussed). The red dots represent different online learners (the larger dots indicate those who posted most frequently). The large center red dot is the teaching assistant in charge of online discussions.

This system is the subject of Buddhiraju and Lin’s junior independent work as well as the focus of an academic paper they are writing in collaboration with graduate students from Chiang’s EDGE Lab. 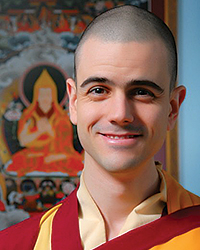 Kelsang Atisha contributed the most popular post in the Coursera class when he uploaded a spreadsheet that could calculate power levels needed when multiple users try to connect to a cell tower. The post was viewed 48,000 times and received 59 votes.

A Buddhist monk at Manjushri Kadampa Meditation Centre in Ulverston, England, Atisha called the course a tour de force in education: “It helped me understand how the Internet is based on carefully conceived mathematical and computer science breakthroughs and to understand the role universities play in technological developments.”

Since the summer of 2012, Princeton University has been offering, on an experimental basis, free online classes through Coursera, an enterprise started by two Stanford professors. Massive online open courses (MOOCs) are a recent phenomenon but learners worldwide have had access to free content from Princeton Engineering lecture libraries and class websites for years. For highlights and history of Princeton Engineering’s online teaching presence, see Classrooms Without Borders.