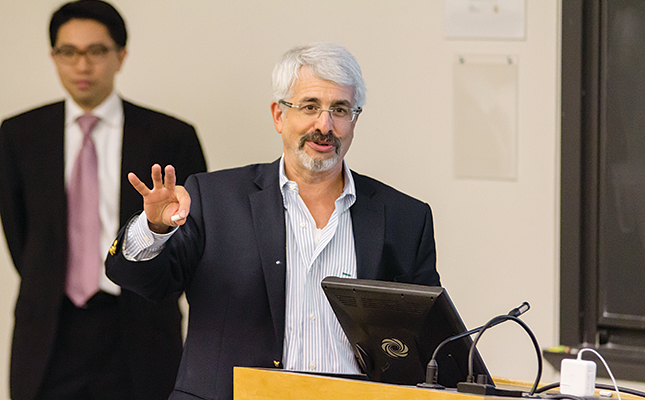 Michael Schwartz, the Gerhard Andlinger Visiting Professor in Energy and the Environment, stepped to the front of the class with a question.

Moments earlier, an energy-markets expert had walked the class through a detailed presentation concluding that today’s high oil prices would likely diminish in coming years while natural gas prices would creep up. Another analyst was about to show the class why oil prices were sure to rise.

Whatever the market forces turn out to be, Schwartz Ph.D. ’76 asked, would they drive a sustained movement away from fossil fuels? “Do you need policy? Can you sustain the kinds of transitions we generally agree we all want to see without a policy?”

It’s a question that Schwartz, a long-time energy executive, sees as central to the several courses he has organized at Princeton. This particular graduate-level class focused on the opportunities and implications of recent exploit- ation of oil and gas reserves in shale and other underground rock formations. In the spring 2014 semester he is teaching a course on the technology and economics of renewable energy.

Schwartz is jointly appointed at the Woodrow Wilson School of Public and International Affairs and the Andlinger Center for Energy and the Environment. The Andlinger Center also plans to make a senior-level permanent faculty appointment in collaboration with the Wilson School and is developing a series of broadly accessible briefings on leading-edge technologies.

“The Andlinger Center is at the critical intersection between advanced technologies and public policy, both of which are essential for a large-scale transition to a clean energy economy,” Schwartz said.