Solar electricity installations and other distributed sources of electric power present increasingly pressing questions for public utilities, regulators and consumers, according to organizers of a recent roundtable meeting co-sponsored by Princeton E-ffiliates Partnership.

The roundtable, held April 10, at Columbia University in New York City, reflected a growing focus on small-scale power generation and customized power management systems, a field broadly referred to as “distributed energy,” said Travis Bradford, an associate professor in international and public affairs at Columbia, who co-organized the event with Amy Craft, an energy economist at the Program in Science, Technology and Environmental Policy at Princeton University’s Woodrow Wilson School of Public and International Affairs.

The event was a follow up to a previous meeting on the subject held on the Princeton University campus in April 2013.

“I was surprised to realize how much work every one of the participants had done in the last year to advance their thinking on this issue and how central to their work this issue had become,” Bradford said.

The meeting focused on questions of valuing and pricing the electric power that is generated or saved by distributed systems, as well as the public services used to distribute and back up the distributed systems. Under current regulations, for example, producers of solar electricity in some states are allowed to sell their excess power to the grid at the retail price. That practice, called “net metering,” serves as an incentive to develop renewable energy, but also incurs costs to utilities that must be borne by others on the grid, including those who might not have resources to install their own solar electricity system.

“This is becoming one of the more substantial issues – trying to figure out the most economic method to incent a lower-emission grid and deliver energy to customers,” said Scott Jennings, vice president for corporate strategy at Public Service Enterprise Group and a visitor-in-residence at Princeton University through Princeton E-ffiliates Partnership. “It is also important that the structure allocate costs to customers fairly – not in a regressive way.”

Princeton E-ffiliates Partnership is a membership-based program that promotes innovation in the fields of energy and the environment through collaborations between academia and industry. It is administered by Princeton University’s Andlinger Center for Energy and the Environment, in partnership with the Princeton Environmental Institute, the School of Architecture and the Woodrow Wilson School of Public and International Affairs.

Craft said that new technologies are challenging the sustainability of the electric utility regulatory model.

“While the regulatory framework may have done a decent job of keeping prices low while maintaining reliable electrical service in the past, the emergence of distributed electricity generation technologies requires us to rethink how consumers should pay for their use of the grid,” Craft said.

The April meeting, like its predecessor at Princeton, was unusual in bringing together a full spectrum of players in the energy sector, including chief executives of utilities and independent power producers, chief executives and founders of distributed energy providers, federal regulatory representatives, state regulators and public utility commissioners, and renewable energy and consumer experts and advocates, to discuss their priorities and concerns openly. “It’s a great forum,” said Jennings. “To have an open, informal dialogue with that type of leadership is a great way to share perspectives – much better than a formal, and potentially contentious, regulatory hearing.”

Following the Princeton meeting, which resulted in a summary paper, the participants were well grounded in the topic and the range of viewpoints and were prepared to move on to talking about solutions, Bradford said. During this year’s roundtable, participants examined three approaches: technological solutions, business model solutions, and policy solutions. 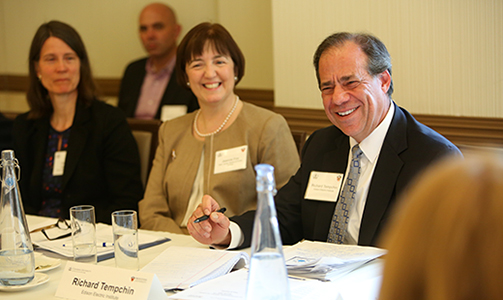 Bradford said he anticipates that another summary document will be produced. In the meantime, he said, elements of the two meetings already are informing nascent regulatory initiatives in several states. The needs are “becoming more tangible in the real world and more complete and complex in the minds of the industry leaders and regulators,” he said.

Participants are aware of the stakes of adapting to emerging technologies and avoiding unintended consequences of new regulations. “It’s really important to get these rules right,” said Jennings.

“The larger question is whether meeting greenhouse emission reduction goals comes at the cost of grid reliability and fairness,” Craft said. “As it brings many different stakeholders together, this forum plays an important role in fleshing out the potential tradeoffs between meeting our climate change goals and maintaining the reliability of the electricity grid.”