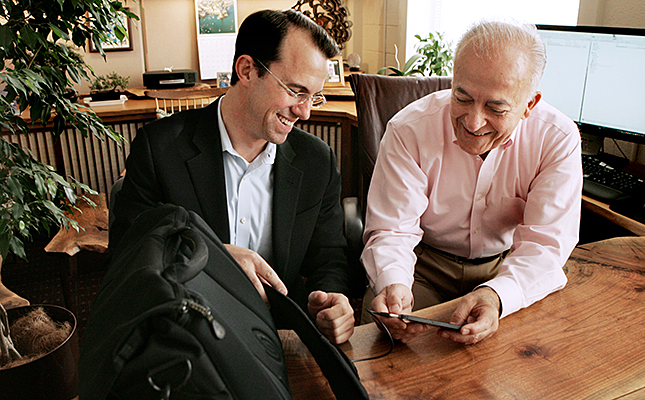 In starting ventures and partnering with established companies, the University’s Office of Technology Licensing facilitates connections between lab and industry. For more information about technology transfer and lists of technologies available for licensing, see www.princeton.edu/patents. 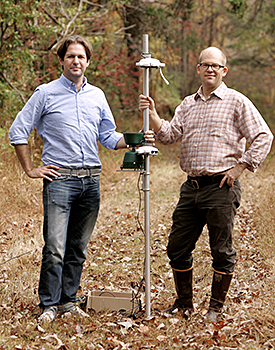 Kelly Caylor and Adam Wolf couldn’t find a cheap, compact sensor for their environmental research, so they decided to make one themselves. The result, several versions and years of work later, is the Pulse Pod.

“Adam and I were both working on problems that required high-resolution, high-quality environmental data, but there were no companies producing the kind of sensors that we wanted to use,” said Caylor, an associate professor of civil and environmental engineering. “Most environmental sensors are expensive and difficult to use. We wanted something that was cheap, easy and smart.”

Wolf, an associate research scholar in ecology and evolutionary biology, had been tinkering with a prototype for some time before he and Caylor began teaching a class together on low-cost environmental sensors.

“From the class, we found students who were really interested in working on this,” Caylor said. One, Ben Siegfried, graduated in 2012 but has continued as a hardware engineer for the Pulse Pod. The team received funding from the Engineering School’s Project X program, which supports promising but somewhat unorthodox scientific ventures.

Pulse Pod, about the size of a household smoke detector, is solar powered and supports a variety of sensors depending on the need it can measure the productivity of a field based on the shade of green or track moisture in soil. It transmits data on the system commonly used for telephone text messages.

After receiving multiple requests for the sensors from fellow researchers, Caylor and Wolf are working to lower costs and increase production. Ultimately, they believe they not only have a business opportunity but a chance to capture data about climate change, while improving farm production.

“We think the value of this is in the scale,” Caylor said. “A few hundred out there would be great, but thousands across Africa measuring climate and crop conditions – that would be fabulous.”

Vorbeck Materials sprang from a visit to a laboratory in the Engineering Quadrangle.

John Lettow, who graduated from Princeton in 1995 with a degree in chemical engineering, returned in 2004 to the laboratory of his former professor, Ilhan Aksay, with questions about materials science. Lettow was looking for information on fuel cells, but his visit changed the course of his business.

“Ilhan had been working on several different technologies,” Lettow recalled. The conversation quickly moved to graphene – a sheet of carbon that is just one atom thick. “The breadth of graphene technology is enormous.”

Over the next year, the pair formalized a new company that would become Vorbeck Materials. The idea was to develop Aksay’s insights into graphene into a variety of industrial and commercial uses.

“I remember saying to John that this is like standing at the edge of a cliff and we will either succeed or fall off,” said Aksay, who is a professor of chemical and biological engineering. “He said, ‘Have you ever seen anyone accomplish something big without taking risks?'”

Today, Vorbeck’s manufacturing facility in Maryland makes products ranging from advanced batteries to wearable circuitry. The company also has a research and development lab outside of Princeton that frequently consults with Aksay’s research group.

“Ilhan has contributed to the company all the way through,” Lettow said. “We would have had a very difficult time without him.” 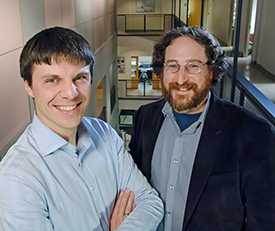 Tag Optics, an award-winning tech firm with customers around the globe, did not start as a business. It began as a senior thesis.

“We were never thinking of commercializing it,” said Craig Arnold, a professor of mechanical and aerospace engineering and one of the company’s founders. “We were just trying to understand the physics.”

In 2005, Arnold and undergraduate Adam Hopkins were intrigued by the possibility of using sound to rapidly focus optical lenses. They knew that light bends as it enters liquids of different densities, in effect turning liquids into lenses. They also realized they could change the density of a liquid – and thus refocus their lens – by blasting it with sound waves.

“I asked Adam to do some mathematical modeling to see what was going on,” Arnold said. Hopkins graduated that year, and went on to earn a Ph.D. from Princeton, and Arnold continued to work on the technology.

In 2011, the company shipped its first product. Today, TAG Optics produces lenses that can completely shift focus 700,000 times per second. The lens is so rapid that it can create a full, three-dimensional image in the time in which a standard lens takes a single snapshot. The technology is currently used in microscopy, laser focusing and manufacturing.

“In terms of spinning out the technology, I can’t overstate the importance of good relations with the University,” Arnold said, noting direct support from Princeton and a general environment that encourages innovation. 11 “They really want to see you succeed.”