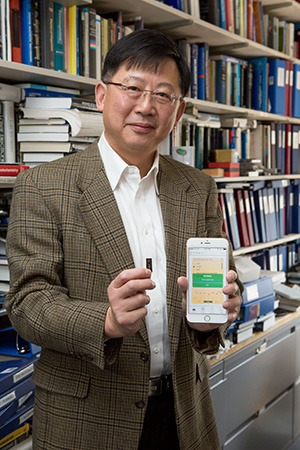 Modern medical testing allows doctors to diagnose and treat conditions that once would have been fatal or debilitating. But for many people around the world, the lack of access to medical tests means that diseases and injuries go unrecognized and untreated.

A Princeton research team is working to develop a method that could help solve this problem by allowing a common smartphone to conduct medical tests now only available in sophisticated laboratories. The initial phase of the project concentrates on traumatic brain injury, which affects millions of people worldwide.

“Traumatic brain injury often goes undiagnosed,” said Stephen Chou, the Joseph C. Elgin Professor of Engineering and leader of the research team. “Current diagnostics for brain injury are often not easily accessible and they are not always effective.”

Supported by a grant from the Eric and Wendy Schmidt Transformative Technology Fund, Chou’s team is working on a sensor, called an M-Plate, that could diagnose a variety of medical conditions with a few drops of a person’s blood or saliva. The sensor, which is smaller than a camera’s SD storage card, would detect biological markers produced inside the human body that indicate an injury or disease. The plate creates fluorescence in the presence of these markers and uses nanotechnology to produce a signal clear enough to be captured by a common cell phone camera.

Developing the smartphone test presents several significant challenges. The at-home test would need to work with blood drawn from a pinprick a sample 1,000 times smaller than one drawn for a conventional lab test. Chou’s team must also develop a specialized filter for both the smartphone’s camera and flash, because neither is well suited for chemical identification.

And the team will need to integrate these components and write software for data analysis and communication.

If the project succeeds, the user would simply photograph the M-Plate with a smartphone. The software would interpret the optical signal of biomarkers from the plate and give immediate advice to the user. The smartphone also could transmit the data to a remote doctor or hospital. Chou’s team is working with a color-coded display that indicates five levels of detection, the highest of which recommends immediate medical attention.

“The method is very simple,” Chou said, adding that he believes that operating the device will require no formal training.