The stone monuments of Italy’s Certosa di Bologna cemetery have stood for more than two centuries as symbols of peace and eternity. But even stone does not last forever. So Enrico Sassoni, a visiting postdoctoral research associate in Princeton’s Department of Civil and Environmental Engineering, is working to protect the marble monuments and even make them stronger.

“In spite of being apparently very durable, marble is actually sensitive to several deterioration processes,” Sassoni said. “Environmental temperature variations cause the opening of cracks inside marble, and rain causes dissolution of the carved surface.”

With the help of an international team, the Princeton researchers have developed a low-cost and nontoxic treatment that might someday help art preservation and conservation specialists.

How? By applying a thin film of a calcium compound commonly found in bones and teeth. This calcium compound, called hydroxyapatite, is formed by the reaction of a water-based phosphate salt solution and calcite, the mineral that makes up marble. The solution seeps into and binds cracks in the marble’s surface. The result is a building, or work of art, that is stronger and more resistant to environmental pollution and rain, the researchers said.

What’s new about the team’s work is the discovery that hydroxyapatite sticks so well. “Compared to other approaches, our method also has the advantage of being based on a nontoxic solvent (water), being able to penetrate deep inside marble cracks, and reacting in just 24 hours,” said Sassoni.

Sassoni presented this work at the 13th International Congress on the Deterioration and Conservation of Stone in Glasgow, Scotland, last September. It was co-authored by Gabriela Graziani and Elisa Franzoni, researchers at the University of Bologna, and George Scherer, the William L. Knapp ’47 Professor of Civil Engineering at Princeton. The three-year project, HAP4MARBLE, is supported by the European Commission through the Marie Sklodowska-Curie grant program. Scherer’s lab has been working with hydroxyapatite as a preservation material for a number of years; the current project is the newest approach. See a video describing an earlier stage of the research.

The first preliminary tests by Sassoni and his colleagues at the Certosa di Bologna cemetery predate his arrival at Princeton, but the researchers believe the new formulation of the hydroxyapatite treatment developed at Princeton could help preserve artworks in the cemetery from the effects of time and weather. Among others, the tombstone of Antonio Basoli, an 18th-century artist and engraver, is weakening and softening around the edges. The stone is crumbling in a characteristic pattern called sugaring.

“The individual crystals in marble are pretty big. They’re similar to sugar grains,” explained Scherer, who leads a materials research group in the Department of Civil and Environmental Engineering. “When you have a chemical attack on the surface, it tends to invade the boundaries between the individual crystals, so they detach.

“After this has progressed for some depth, if you rub against the surface, those grains will just come off,” he said. 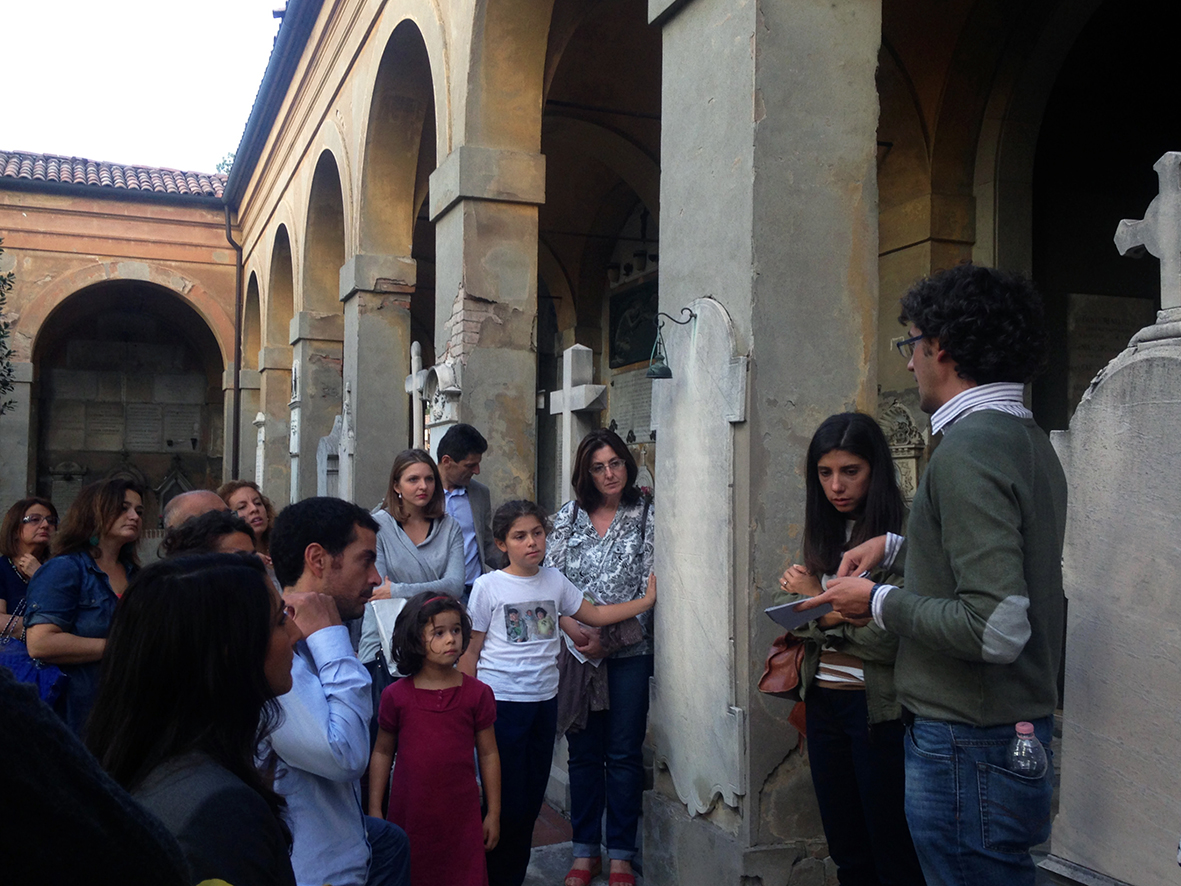 Scherer said that the hydroxyapatite treatment works a bit like glue. “You want to put something into those boundaries to strengthen and hold it together,” he said. “And that’s what the treatment does well.”

“We’re putting down quite thin layers, about a tenth of the thickness of a human hair,” said Scherer. “The point of that is that you don’t want it to be noticeable. If you make thicker coatings, they’re likely to change the reflectivity and color of the surface.”

Sassoni said the researchers are making good progress toward creating a “more dense and crack-free” treatment.

“Following some preliminary results obtained by a former visitor from Bologna, Gabriela Graziani, our recent paper suggests that this goal can be achieved by adding alcohol to the solution that marble is treated with,” he said.

In September, Sassoni will return to Bologna for the final year of his project. There, he says he will test the possibility of further improving the hydroxyapatite treatment by electrodeposition – that is, assessing how well an electric current might work to deposit a thin surface layer. The Princeton researchers are also planning to start a pilot application of the hydroxyapatite treatment on some sculptures in the park of the Palace of Versailles in Paris, in collaboration with restorers and researchers in charge of the sculptures preservation.

The team has projected that one application of the treatment has the potential to protect a marble structure for decades.

“If you can put down an invisible layer that can provide you with decades of benefit, then you can afford to treat it at that interval,” Scherer said. “You wouldn’t want to treat it every six months. You don’t want to paint the Taj Mahal yearly. But if you could treat it, and then come back in 20 years, that would be worthwhile.”