Berthy Feng tapped her computer tablet and images flashed across the screen: elephants on the veldt; herons in flight; a ship at sea.

The pictures were more than eye candy. Feng, a junior majoring in computer science, is part of a student team that is developing an app to foster a sense of discovery and wellbeing in people with memory loss. The app, called Pixplor, is designed to deliver images in tune with the user’s interests and mood.

“It’s a tailored exploration,” said Feng. “You’re seeing things that are comforting but also will keep you guessing and excited to see what’s next.”

Pixplor, a student project in the lab of Claire Gmachl, the Eugene Higgins Professor of Electrical Engineering, does not seek to improve cognitive function. Rather, it is being developed to provide a little happiness for those living with mild to moderate memory loss. 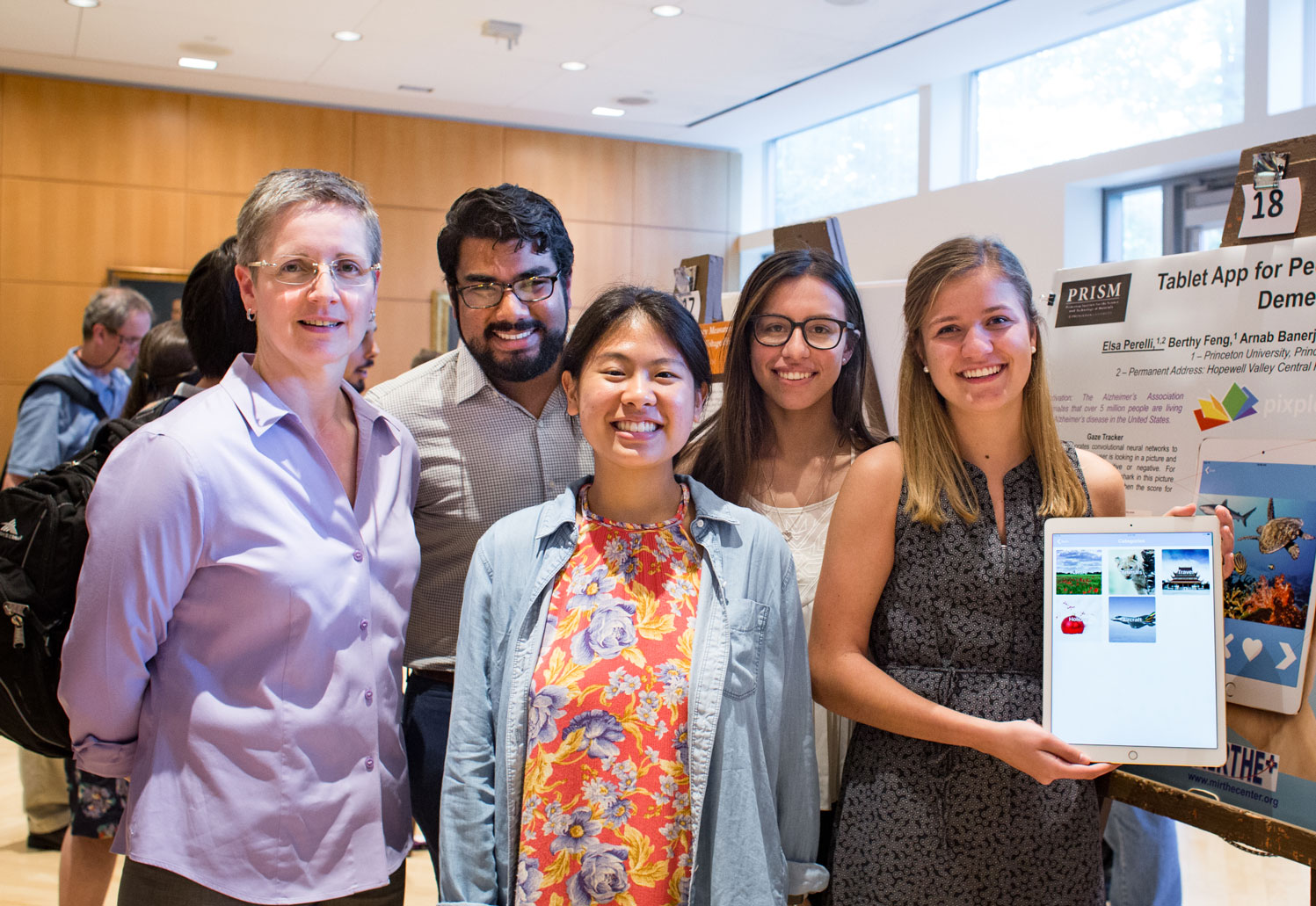 The program uses a computer’s camera to track the user’s eye movement across the screen and evaluates which images draw the most attention, and thus most pleasing and interesting for each user. Pixplor is reinforced with a sophisticated algorithm that will not simply churn out images similar to those liked, but will interpret and diversify the experience in each profile to maintain an element of discovery.

Pixplor has at its disposal some 2 million images on offer through the Google Open Images Dataset. Pixplor funnels those images, explained team member Astrid Montanez-Garay, a junior majoring in electrical engineering, into one of nine categories. The travel and nature categories are the most popular among users of the prototype, she added. Other categories include animals, food, holiday, aircraft, automobiles, sports and religion. The team developed the categories after interviewing caregivers at local assisted-living facilities.

“Before we fixed a lot of the bugs, we would click on the app and get some pretty funny images,” said Garay. “So we would click through ‘food,’ for instance, and a raw chicken would come up. There was a lot of troubleshooting going on.”

Team member Arnab Banerji had the task of combing through 8,000 descriptive tags in the database to select which tags should be included. Many were eliminated because of inappropriate content, or because they did not generate cheerful photographs.

“We wanted the experience to feel tailored,” said Banerji, a junior majoring in electrical engineering. “Our first thoughts were about that user experience; what are the components that we need to build, what is the layout going to be so that it feels like it’s centered on your experience?

“It turned out to be fairly simple. There’s no time limit. You can browse as long as you like. It’s just an open-ended exploration.”

Gmachl, the team’s adviser, had the idea for the program while working as a volunteer with memory-impaired parishioners of St. Paul’s Roman Catholic Church and in assisted-living facilities in the area. Her students have worked on the system in class and over summers. The team is scheduled to continue to work on the project this summer and hopes to eventually deploy the program in memory-loss units in and around Princeton to test its appeal.

“The question was could you build something like a picture book that people would enjoy flipping through,” said Gmachl. “But not just a picture book: it records your preferences, what you like and dislike, and feeds that back to a caregiver.” 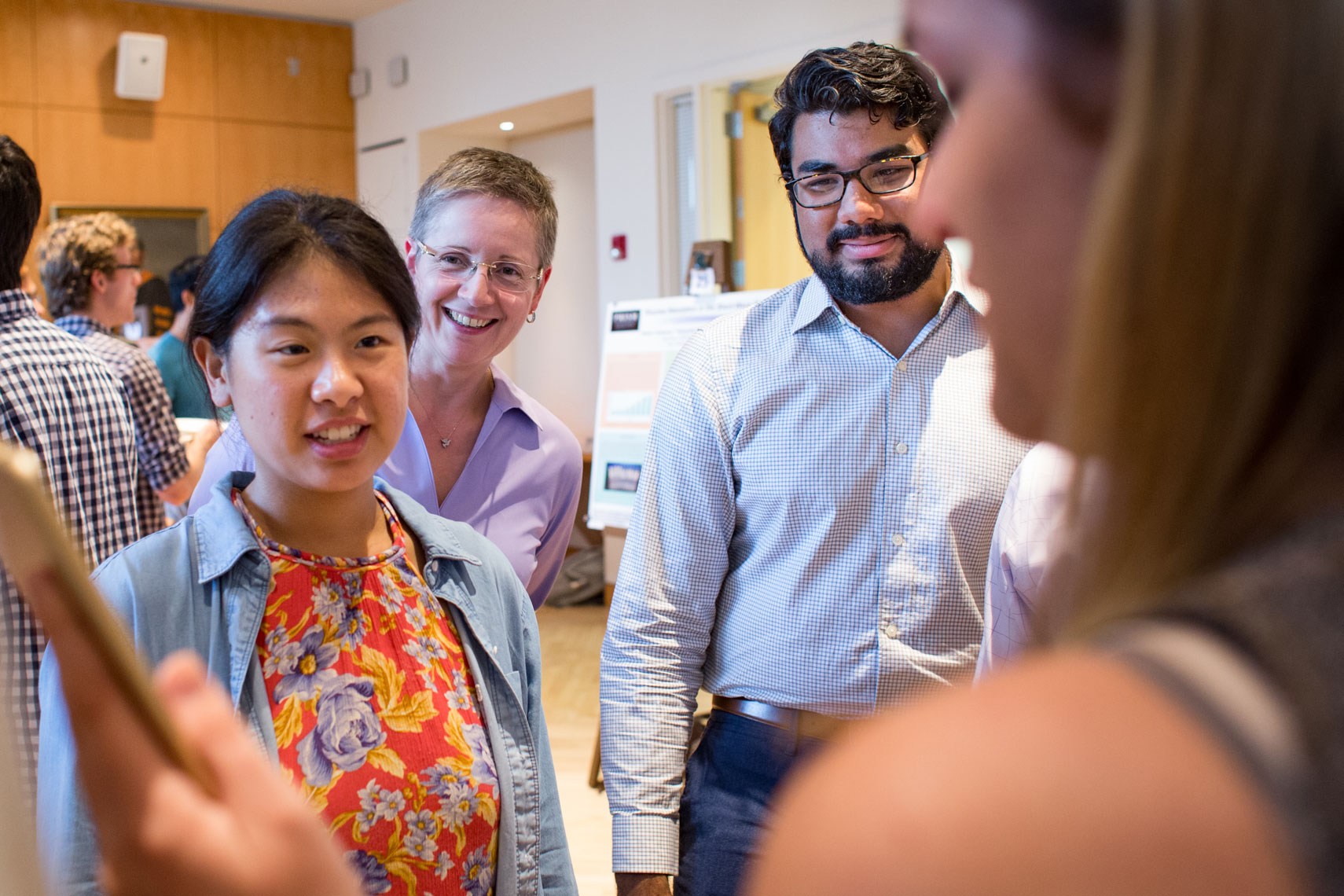 The Pixplor team had outside input on the manifestation of memory loss from Dr. Joseph Tracy, director of neuropsychology services at Jefferson University Hospital in Philadelphia.

“I thought the app a wonderful idea that could help provide cognitive and emotional stimulation, which is an important part of the treatment,” Tracy said. “As well, the app could help immerse these individuals in an enjoyable activity, much as reading a good book, reminiscing, or enjoying a good movie might otherwise do. As a result, it may lift their mood and counteract depression.”

Gmachl said that lifting people’s spirits was a critical part of assisting those with memory loss.

“Human flourishing doesn’t always have to be about improving yourself,” she added. “Just making someone feel good is good in itself. The primary goal is making people happy. That is our first intention. Maybe-and it’s a big maybe-because the app keeps track of what people like, that information can be given back to researchers. That’s part of what computer science does these days; it takes data that can be mined.”

Funding for Pixplor was provided through a gift of the Stuart M. Essig ’83 and Erin S. Enright ’82 Fund for Innovation in Engineering and Neuroscience, including stipends for the student participants, computer hardware, and other materials and supplies.