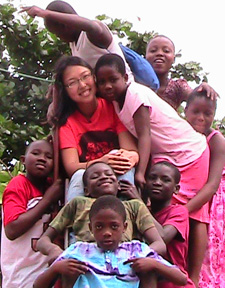 Earned certificates in sustainable energy and engineering biology and pursued a thesis that
combined both these areas with materials science. Her thesis investigated how the nanostructure of ocean
microorganisms called diatoms contributes to their relatively high photosynthetic efficiency. The work could
help design energy-harvesting devices based on examples from nature.

“I am incredibly interested in international development and how it relates to
sustainability, energy, and water.”

Co-president of the Princeton chapter of Engineers Without Borders and co-founder (with Yin Liang)
of the Princeton chapter of the International Association for Hydrogen Energy, which won an international
competition for hydrogen energy production. Member of the executive board for Community House, where she
volunteers with the after-school academy and Princeton Engineering Education for Kids. Involved in the
Student Volunteers Council through the American Red Cross Club. Served as a head fellow at the Writing
Center. Member of the President’s Steering Committee on Undergraduate Women’s Leadership
and the Pace Center Student Steering Committee.

“I enjoy cooking (as an independent student), knitting (with Hats for the Homeless on
Friday nights at Murray-Dodge cafe), and rock climbing.”