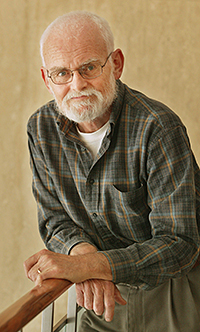 The Cantor Set is a mathematical puzzle in which segments are repeatedly removed from a line, while the number of points left remains the same.

Philip Holmes, the Eugene Higgins Professor of Mechanical and Aerospace Engineering, begins his sonnet “Gaps” with an almost arithmetical recitation of the Cantor Set that quickly expands to apply its strange perspective to the greater world.

Like much of Holmes’ poetry, “Gaps” doesn’t seek to mirror the world. It is more like a lens, allowing Holmes to focus and manipulate an interesting aspect of reality.

It’s an approach that also informs his mathematics. When Holmes builds a mathematical model, he is creating a secondary world, but one severely defined by its limits.

“A good mathematical model should be incorrect – it should be too simple,” said Holmes. “It should idealize, providing a way to pick out a few features and highlight them.”

Holmes, who has written poetry since his undergraduate years at Oxford, believes that poetry and science share an intensity of focus as a method to reveal wider truths.

“It’s a way to use few words, or equations, to tell a very big story,” he said.

of those four ninths remaining.
Go on and on: what’s left at last
is utterly disjoint — beginnings,
ends — each point divided from

the next, but oh! so close,
infinitely numerous
as what you started with
and carefully have pried apart.

Will there be time to measure up
this dust of unremembering?

what’s left at last is utterly disjoint —
beginnings, ends and more — each point
divided from the next and yet uncountable
and numerous as what you had before.

Take a life and take the most part out,
for so it happens; only the best-rehearsed
of memories remain: a voice transformed
among the absences, a face, a hand.

You brought me here, but there was more:
dust that blows away, gaps that captivate.