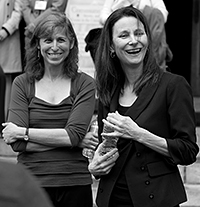 The Flock Logic dance project began after Susan Marshall, an internationally renowned choreographer, attended a 2009 lecture on groups and collective motion by Naomi Leonard ’85, a professor of mechanical and aerospace engineering.

Marshall, who had recently joined the Princeton faculty as a professor of dance, listened as Leonard explained how simple rules given to individuals can result in complex motion patterns in groups such as fish schools or bird flocks. Leonard uses the principles in her robotics work, but Marshall saw parallels to improvisational dance.

“Improvisational scores are basically a set of instructions that give dancers freedoms and limitations,” she said “The way Naomi was talking about the rules that govern flocks and herds of animals that move collectively made me wonder where we might go with this artistically.”

Marshall and Leonard, both of whom are MacArthur Foundation grant recipients, arrived at a project in which amateurs and professional dancers would follow flocking rules.

“The project was artistic, but the approach was much like we use in engineering design,” said Leonard, the Edwin S. Wilsey Professor of Mechanical and Aerospace Engineering. “We did not set out to do engineering, but I have capitalized on our artistic explorations to address scientific questions.”

The performances occurred in 2010, but Leonard is still using the data generated from the project and recently presented a paper on the dynamics of the dancer network and its emergent motion patterns. Leonard said she would like to continue to explore feedback, interaction and dynamics at the intersection of the performing arts and engineering, with an interest in extending the approach to music as well as dance.