Even as Iran and six global powers negotiated a nuclear accord this summer, Princeton researchers were looking at how to reduce nuclear risks beyond the 10-year horizon of many of the pact’s key provisions.

One way to reduce this risk is by converting Iran’s enrichment program from a national to a multinational enterprise, according to a policy report published in the journal Science by a team of experts that included Alex Glaser, an assistant professor of mechanical and aerospace engineering with a joint appointment
in the Woodrow Wilson School of Public and International Affairs. 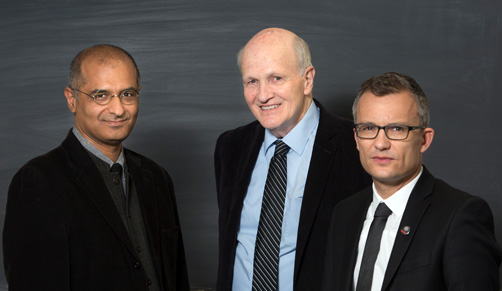 Glaser collaborated on the report with Frank von Hippel, professor of public and international affairs, and Zia Mian, a research scientist at the Wilson School’s Program on Science and Global Security. Glaser’s research combines technical aspects of nuclear fuel-cycle technologies and policy questions related to nuclear energy and nuclear-weapons proliferation.

One of the biggest concerns is Iran’s uranium enrichment program, which uses high-speed centrifuges to concentrate the specific form of uranium needed to power a nuclear reactor. Such enrichment plants can be reconfigured quickly to produce weapons-grade uranium.

In their article, the authors explain the special risk of modern enrichment technology and how this risk increases dramatically with the number of centrifuges and the available stockpile of uranium. Taken together, these factors determine the “breakout time” – the time it would take a country to acquire enough weapons-grade material for one nuclear bomb.

Making sure that the breakout time is at least one year has been a key objective of the United States in talks with Iran.

The Princeton authors propose that Iran’s neighbors and one or more members of the group that includes France, Germany, the United Kingdom, China, Russia and the United States could purchase a share of Natanz, Iran’s primary nuclear enrichment plant. This would give the world continued access to Iran’s centrifuge program and confidence that it was being used only for peaceful purposes – in a way that goes beyond traditional international nuclear safeguards.

To ensure even greater transparency, Middle Eastern countries could form a regional nuclear inspectorate, when politically appropriate, to supplement current international safeguards. “This would be similar to what Argentina and Brazil did after they both simultaneously gave up their nuclear-weapon programs,” von Hippel said.

“The nuclear deal with Iran and a multinational approach to uranium enrichment could be important steps toward a long-hoped-for nuclear weapon-free zone in the Middle East,” Mian said.